Since 2018, Euler Motors' designed-for-India technology has been tried and tested on the road. Now, the company is ramping up its capacity 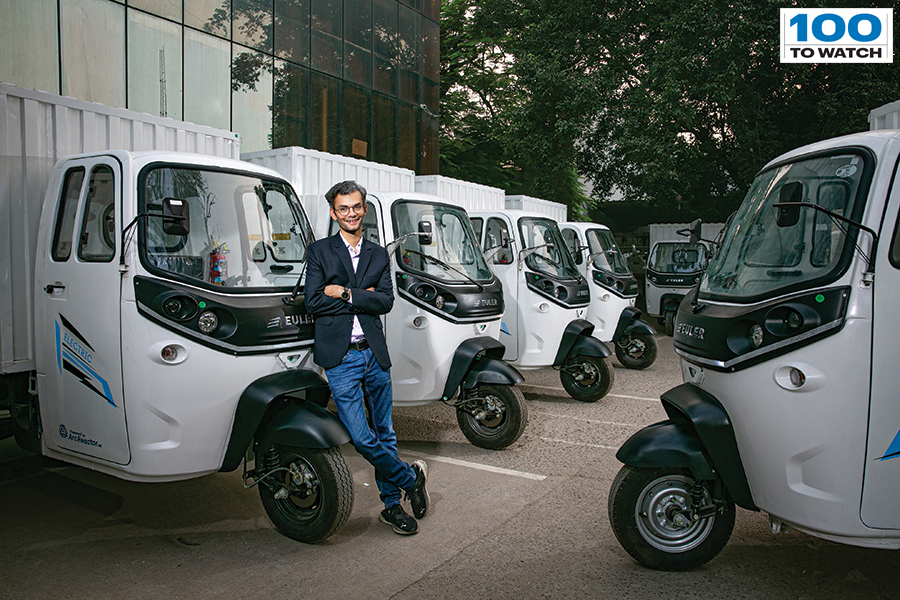 As far as he can remember, Saurav Kumar has always been fond of mathematics and building robots. Much of that is, of course, thanks to his father, who had a love for mathematics and physics, and ensured that his son also picked up a passion for the sciences, home tutoring him before shifting the entire family from Bihar to New Delhi in search of a better future.

The young Kumar spent a lot of his time building robots at school at DPS RK Puram, taking the passion all the way to college at the illustrious Delhi School of Engineering and even later at Cornell University, where he built everything from aerial vehicles to underwater ones. “I have always been fascinated with the combination of hardware and software, and that has fundamentally stayed with me,” Kumar tells Forbes India.

That’s precisely why when he decided to move on after selling his first startup Cube26 to Paytm in 2017, Kumar was quite clear about what he wanted to build next. “I realised that whatever you want to build would take a decade to make a dent into the large problem that you’re trying to solve,” Kumar says. “Then from a wealth and money point of view, I realised that you could work for the Yahoos of the world and always make money. But there are only a few things that you could do in life where you can also give back to society.”

In 2018, Kumar set up Euler Motors, named after Swiss mathematician Leonhard Euler, to build electric three-wheelers to tackle the grappling problem of pollution in Indian cities. “If you look at the top 20 cities facing severe pollution, India would have about 18-19 of them,” Kumar says. “Globally about 40 percent of the contributors to air pollution was vehicles.”

Also read:  Not just cars, Tata Motors wants to change the way its trucks and buses move too

Starting from a vendor’s workspace in Faridabad, Kumar went on to build a prototype of the three-wheeler electric vehicle. The initial product used a lead acid battery as a power source and, over time, Kumar and his team also began building their own lithium energy battery packs. Today, Euler Motors’ flagship product is an electric three-wheeler called HiLoad, which touts a driving range of up to 151km and can be charged within 15 minutes. The startup also operates its own charging network and an app that lets users monitor their vehicles.

“Building the vehicle was never the challenge,” Kumar says. “I always enjoyed building it. If you want to attempt to build a hardware company, there are very few examples. But before looking at questions of funding and building at scale, the fundamental question is, who is your customer?” It had helped that the electric vehicle industry in India was still in its infancy, and companies, particularly ecommerce companies, hadn’t begun shifting to electric vehicles en masse when Kumar began operations.

“When you think about owning an asset for eight to 10 years, and you don’t have the comfort that the vehicle is going to be superior in terms of performance, obviously transition won’t happen, and that was the single biggest factor that I had understood back then from a product point of view,” Kumar says. “The second factor was more around the ecosystem including charging, service, financing.”

That meant going on to build a full-stack electric vehicle company, including the right product, charging ecosystem, and financing. To begin with, the company set up some 200 charging stations across the country in addition to about 10 service stations in New Delhi and Bengaluru. The HiLoad EV, Kumar says, beats all its competitors with internal combustion engine (ICE) vehicles in terms of performance. The HiLoad‘s battery pack also comes with an inbuilt thermal management system and liquid cooling technology that allows vehicles to run efficiently on any gradient and withstand ambient temperatures.

Kumar first began building the prototype in 2018 from a vendor’s factory. But before that, he also spent a considerable time understanding battery technology since that accounted for the bulk of the manufacturing cost. “Everything else, whether it was motors or controllers, I kind of begged, borrowed or stole, as long as it matched my requirement,” Kumar says. “The automotive sector at that time hadn’t solved for battery and in commercial vehicles, people also tend to overload.”

To begin with, Kumar then imported a Tesla battery pack from the US and one from China and then disassembled them to understand first-hand how they were solving the problem. He also needed to understand what was feasible in India, especially from a capital point of view. “I went to China to figure things out, spoke to Samsung to give me cells,” Kumar says. “I found a power bank maker in Noida to understand how things work.” It took about eight months before Kumar built the first battery pack for Euler.

In the meanwhile, in return for the space and the equipment that the vendor provided, Kumar had committed to providing him with the order for building 200 or 300 models of the first version of the vehicle. “I ended up reading a lot during that time to learn ways of manufacturing,” Kumar says. Soon, Kumar found an angel investor who committed ₹1 crore, raising it by another ₹80 lakh later. A few months later, by October 2018, Blume Ventures invested in the company, by which time Euler had made around 20 of its prototypes.

By then, the company had an order book of around 100 vehicles and was generating ₹8-10 lakh a month by leasing out the vehicles on a monthly basis. “So before perfecting the vehicle, we said we will run the vehicles and pick our customer sets carefully. We picked up people from the ecommerce industry, B2B industry, and hyper-local grocery businesses and we had three kinds of customers telling us the overall dimension of the box, top speed, range, payload, and carrying capacity.”

Kumar then built about 180 units of their EV, and ran them for two years to understand the sample data before coming out with a final product, customised for India. In the process, the 32-year-old also saw first-hand the problems including weather and range since those vehicles had clocked in over a million kilometres. That helped Euler bring out the next version of the vehicle. Euler made 50 of the new models before launching it in the Indian market in 2021 as HiLoad EV. “The only difference between your typical OEM and Euler was that we kind of tested all of this directly with our customers on road,” Kumar says.  “So we were close to the problem.”

Today, the company is building one of its largest factories over 12 acres of land in the NCR, deploying around ₹150 crore to build a capacity to make 3,000 vehicles a month. The company wants to manufacture 1,000 vehicles per month by March 2023, from about 100 vehicles a month now. “We have a 9,000 vehicle order book which we have to deliver in a year,” Kumar says. “That’s why we have taken a vital jump in our capacity.” So far, Euler has raised $82 million in funding from investors including the likes of GIC, Blume Ventures, Inventus Capital and ADB Ventures among others.

While the company is still not profitable, Kumar reckons that Euler Motors will turn profitable once it manages to produce 2,000 vehicles a month, which could be a couple of years from now. “I want Euler to be synonymous with commercial vehicles,” Kumar says. “We want to lead India’s EV commercial opportunity. Our immediate focus will be to push to more markets and go deep into tier 2 and tier 3 cities.”

(This story appears in the 23 December, 2022 issue of Forbes India. To visit our Archives, click here.)

Tweets by @forbesindia
Pocket FM wants to be the Netflix of long-form audio
Photo of the day: Mounting attack