Upsets at the recently concluded Fifa World Cup and T20 World Cup have put the spotlight on lesser-known teams and emerging stars, giving the world new role models and heroes 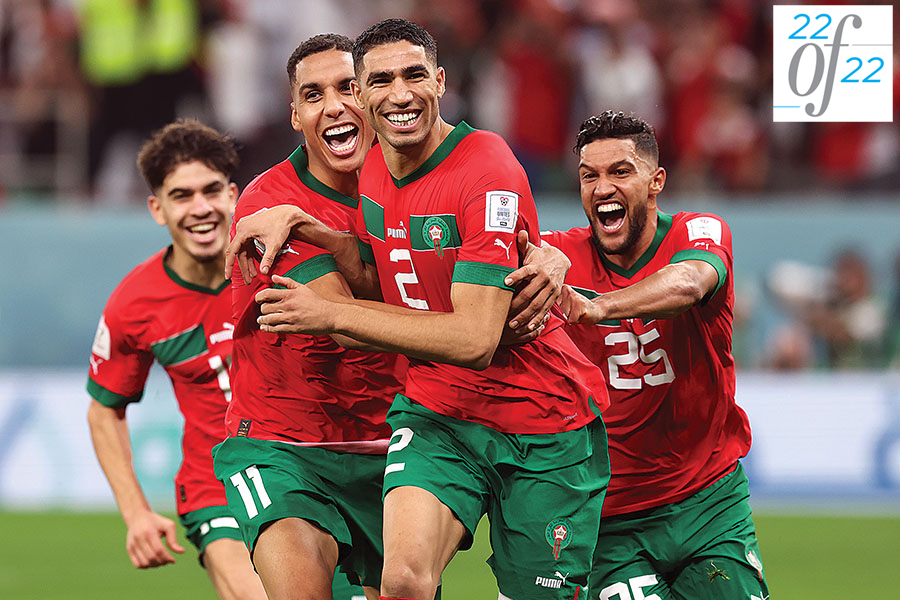 Morocco’s Achraf Hakimi exults after scoring the winning penalty against Spain at the Fifa World Cup. He became an overnight hero as the Arab country won against its formidable rivals; Image: Ian Macnicol/Getty Images

Prior to their pre-quarterfinal match at the 2022 Fifa World Cup, Achraf Hakimi had cautioned Spain that it should be a little afraid of Morocco. Having topped the group, the Arab nation deserved a “little respect”, he said. “And why can’t we pull off a surprise again?” Hours later, the 24-year-old emerged as a hero in Morocco’s stunning victory over Spain—one of the many upsets in the tournament, held in Qatar—with his decisive Panenka penalty and calm demeanour during the shootout. After scoring the goal that took his team to the quarters for the first time, he rushed to the stands to hug his mother, who kissed him on his cheek. What made the moment even more poignant was the fact that Hakimi was born in the Spanish capital Madrid before the family migrated to Morocco, where his mother cleaned houses and father was a street vendor. What is sport without such endearing moments? Or the emergence of new role models, especially those who have overcome socioeconomic barriers? And, of course, the shock that comes with the triumph of the underdogs?

The year 2022 saw many such games, especially during the two marquee events: The Fifa World Cup and the T20 World Cup. In the latter, Namibia shocked Sri Lanka, who had won the Asia Cup only months ago; Ireland and Scotland both beat the West Indies; Ireland even won against eventual champions England; South Africa lost to the Netherlands, while Zimbabwe defeated Pakistan by a solitary run in the group encounter. “Upsets are good for the game. Cricket needed such a World Cup. The football World Cup, too, saw some fantastic results and magical moments,” says Vijay Lokapally, consulting editor, Sportstar. In Qatar, title favourites Argentina had to eat humble pie against Saudi Arabia, ranked 48 places below them in Fifa rankings; Brazil lost 1-0 to Cameroon; South Korea defeated Portugal, while Germany and Belgium crashed out early in the tournament. And Morocco continued its dream run by winning against Portugal in the quarters to enter the semis. Also read: Beyond the glamour of IPL auctions, a cricketer's struggle to surviveThese two global sporting events took place after the coronavirus pandemic when matches were played sans spectators. And, therefore, the excitement among sport enthusiasts was palpable. Lokapally explains why the football World Cup was a bigger, and more attractive, spectacle: “The Fifa World Cup is an international celebration of a beautiful game. The attention is global, the reach is massive—far bigger than cricket—and even the kind of frenzy you see in football does not exist in cricket. Every country has a style of its own; that doesn’t happen in cricket. And football generates far more revenue.” India had a torrid 2022 when it came to cricket, considered a religion in the country. It faced an embarrassing 10-wicket loss against England in the semi-finals of the T20 World Cup, had a premature exit in the Asia Cup and lost the one-day international series against Bangladesh in December. “It has been a poor year. Our cricket has been most inconsistent,” says Lokapally, who has also authored books on cricketers Virat Kohli and Rohit Sharma.

These disappointments aside, there were notable performers in individual sport in the year gone by. India’s first individual Olympic gold medallist in athletics, javelin thrower Neeraj Chopra, had an enviable 2022, becoming the only Indian to win the Diamond League and bagging a silver at the World Athletics Championships. Born to farmer parents, Avinash Sable from Mandwa, Maharashtra, who became the first Indian to qualify for the Tokyo Olympics in the 3,000 m steeplechase in 68 years, won a silver at the 2022 Commonwealth Games. In December, weightlifter Saikhom Mirabai Chanu, a silver medallist at the Tokyo Olympics, won a silver at the World Championships with a total lift of 200 kg.

Globally, some iconic names bid goodbye to their sport. Tennis ace Roger Federer, winner of 20 Grand Slams, announced his retirement, saying he had “overachieved in his mind”. Serena Williams, who has a record 23 Grand Slams, also said she was quitting the game, but did an about-turn later, saying she had not retired from tennis, hinting that a comeback may be on the cards. She may well surprise her opponents at the age of 41. Age, after all, is just a number, as Achanta Sharath Kamal has proved. The 40-year-old tennis player won four medals at the 2022 Commonwealth Games in Birmingham, and was conferred the Major Dhyan Chand Khel Ratna. Also read: Unparalleled passion: What makes Northeast India the talent factory of footballWhat 2022 also showed was that one cannot write off proven performers. Kohli, 34, for instance, was under scrutiny when he reached Australia for the T20 World Cup. He shut his critics up with a blistering match-winning knock of 82 not out off 53 deliveries against Pakistan, with two sixes against Haris Rauf in the 19th over that will remain etched in everyone’s memory. The former India captain was the highest scorer in the tournament with 296 runs at an average of 98.66. Sport needs its heroes. And competitive events like World Cups will bring many of them into the limelight. Like Moroccon goalkeeper Yassine Bounou, 31, whose two penalties saves during the shootout against Spain have made him an overnight sensation.

Tweets by @forbesindia
Wrinkles, imperfections, firmness: Skincare has led the way in 2022's beauty trends
US biology textbooks have less climate content than decade ago: study