From growing up listening to his father playing multiple instruments, to trying to create a melody from a single thought "like painting a picture", Dhillon has scripted his musical success to become the life of every party 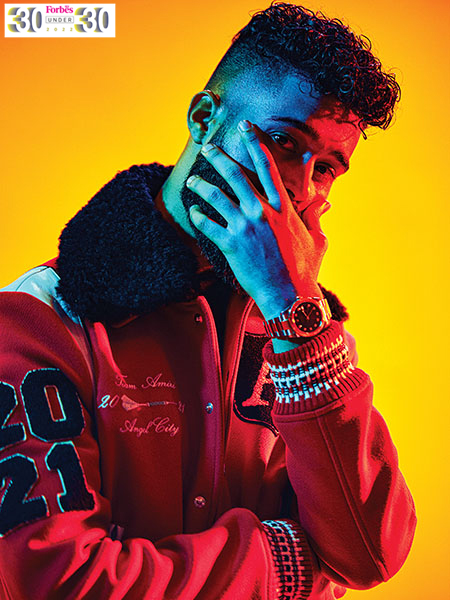 AP Dhillon, 29
MusicianAmritpal Singh Dhillon, popularly known as AP Dhillon, has had quite a year. From releasing multiple songs and taking social media by storm to conducting a highly successful first tour, he’s done it all.
The singer, rapper, songwriter and record producer who creates Punjabi music released his first song ‘Fake’ in 2019 and has only had an upward trajectory since then. “I always knew I wanted to create music. I love playing instruments and creating different tunes that are a mix of genres,” he says, adding that his taste for music developed by listening to his father play multiple instruments while growing up.

Dhillon’s music is a mix of R&B, hip-hop, pop, and rap. His songs are among the most heard across streaming platforms, and five of his singles have peaked on the Official Charts Company UK Asian and Punjabi charts, with ‘Insane’, ‘Majhail’ and ‘Brown Munde’ doing particularly well. His music was also the life of parties last year.
For Dhillon, 29, the best part about creating music is “trying to create a melody out of one single thought. It’s like painting a picture”.
Dhillon did his bachelor’s in civil engineering from Ropar, Punjab, and went on to do his masters in business administration from Victoria, BC, Canada.
When AP first started working on songs, it took him a year of multiple failed attempts to understand the process of creating music. “In the first year of creating music, my team and I failed a lot. We worked on different tracks and multiple sounds, but couldn’t produce the kind of music we wanted to. It has been a learning curve and along the way we have found our voice,” he says. “My team and I are experimenting with our tracks. We want to change the sound of Punjabi music in 2022 with songs in newer and unexplored formats, more collaborations, and doing things outside the box.”
Dhillon’s first tour, The Takeover Tour, that was held in six cities–Chandigarh, Gurugram, Delhi, Goa, Hyderabad and Mumbai–in December 2021 was a massive success. “The tour was the best part of 2021 for me. With Covid-19 regulations, we weren’t sure if we could even conduct a tour. It was all planned just a month in advance… it was the first time I sang in front of such a large audience, but the love I got from the tour has been surreal,” he says.
“The year 2021 has been APD’s year. He clocked half a billion streams with his hits ‘Brown Munde’, ‘Tere Te’, ‘Desires’, and ‘Insane’, to name a few. Without a doubt, he is the number one music icon of the year,” says Padmanabhan NS, artists & label partnerships head, India, Spotify.
Dhillon is planning a UK tour next followed by one in Canada and the US. “We want to create music that not only resonates with Indians but is loved by people across the globe. We want the world to appreciate our colour,” he says.

Tweets by @forbesindia
Payments market in India is exciting: Ria Mirchandani—Forbes India 30 Under 30 2022
From being a referee to scoring goals: Aneesha Menon, CarTrade Tech