From being a referee to scoring goals: Aneesha Menon, CarTrade Tech

You have to be in the game to understand the game, Menon believes, as she highlights the new role of CFOs in the startup ecosystem where speed is the mantra, scaling fast is as crucial as failing fast, and spotting problems alone is as good as a problem 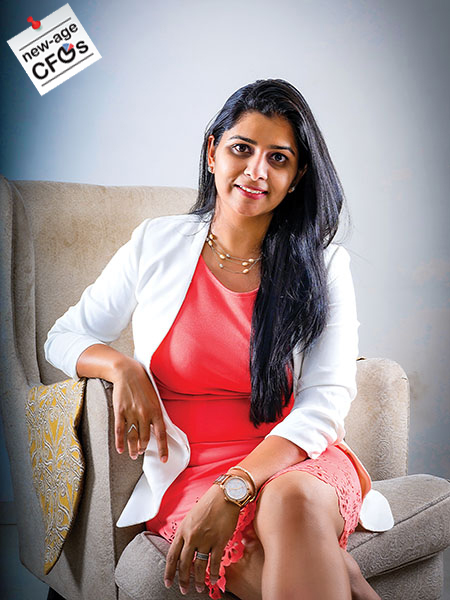 Don't just apply the brakes, tell me the road where there are no speed breakers...that's the new role of CFOs: Aneesha Menon, Group CFO, CarTrade Tech; Image: Neha Mithbawkar for Forbes India

It was September 1986. In the dying moments of Turkish League, defending champions Besiktas found themselves in a weird situation. The referee inadvertently found himself in the way of a deflected shot, which got redirected via his face and jetted into the goal. Ankaragucu won the game 1-0. In an interview after the match, the referee explained his awkward act. “This is the first time in 17 years that I’ve scored a goal,” he reportedly remarked. The media termed it as a ‘bizarre’ goal.Over 35 years later, in India, Aneesha Menon points out another interestingly not-so-bizarre situation. “CFOs are playing in the field along with other players,” says the group CFO at CarTrade Tech, an auto classified platform that got listed last August. “And it’s legit,” smiles the 36-year-old, explaining how the rules and roles have changed.
From being a referee—raising red flags whenever there is laxity in compliance, performance or auditing—the new-age CFOs are helping CEOs score goals. “You have to be in the game to understand the game,” she adds, underlining the new role that CFOs have donned in the tech startup ecosystem where speed is the mantra, scaling fast is as crucial as failing fast, and spotting problems alone is as good as a problem.
Menon, a chartered accountant who started her professional innings with EY in 2006, explains why the goalposts have moved for the CFOs. A linesman’s job, staying outside the ground, and closely monitoring the movement of the players and the ball, is to ensure players play by the book.
Ditto for businesses. “When you’re not in the thick of the venture, it’s difficult to rationalise why and what’s happening around you,” says Menon. If I’m not part of the game, she lets on, at times I won’t appreciate the craziness about it. “I wouldn’t understand why they’re running so fast,” she says. Now when CFOs are on the field, Menon reckons, they are in a position to spot a problem, devise a solution, and feel the buzz.
With CarTrade getting IPOed last year, has Menon’s role as a CFO changed much post-listing? “A lot of work is compliance-driven,” she says. Well, listing definitely compounds a CFO’s work, especially when a company like CarTrade operates a bunch of brands such as CarWale, Shriram Automall, BikeWale, CarTrade Exchange, Adroit Auto and AutoBiz. There is lot more onus, Menon says, on how and what you communicate to the shareholders and investors.
There is another inconspicuous change. “You feel you’re also doing a sales role,” reckons Menon. One has to continuously explain the business, describe all the nuances, simplify the complexities, point out the achievements and highlight the potential. “Keep doing it and you end up having a lot of respect for the sales guys all over again,” she laughs, adding that repeatedly pitching the story is not easy.

Industry experts reckon why powerful storytelling has become a priceless asset. Today, most organisations expect the CFO to be more than a scorekeeper. “In fact, they are a partner to the CEO in setting the direction and long-term objective,” says Sandeep Kher, director (finance), at Sequoia India and Southeast Asia. CFOs, Kher underlines, sit at a unique vantage point which makes them best-suited to give inputs, and collaborate more closely with the business leaders.
Kher traces the origin of a shift in the role of the CFOs to the global financial crisis in 2007-08. “It was the tipping point,” reckons Kher, who had over a decade-long stint with GE and worked closely with the CEO and P&L leaders in setting the growth trajectory. Post-crisis, CFOs not only played a critical role in ensuring a company’s survival but also started setting the template for the future.
Meanwhile, in India, Kher points out a strong trend blowing in the CFO landscape: A change in the mindset. “CFOs now are more than willing, and capable, to provide strategic guidance,” he says. While finance functions such as reporting and statutory compliance are still fundamental, these are now considered hygiene. “CFOs today are business partners,” he says.
Menon, for her part, gives a lot of credit to CEOs who push the envelope to bring the best out of the CFOs. She dishes out her own example. Menon joined CarWale as assistant vice president in 2015, and became part of CarTrade after the former’s acquisition in 2016. Two years later, she was offered the role of Group CFO of CarTrade, which she was not keen to take on because her daughter was less than a year old. “I thought it would put a lot of pressure on me,” she recalls.
What helped in taking the mantle was a firm conviction from her CEO. “Don’t ever let your child be a reason for you to step back,” was the advice from the chief executive officer. “I was lucky to get the support,” she says. 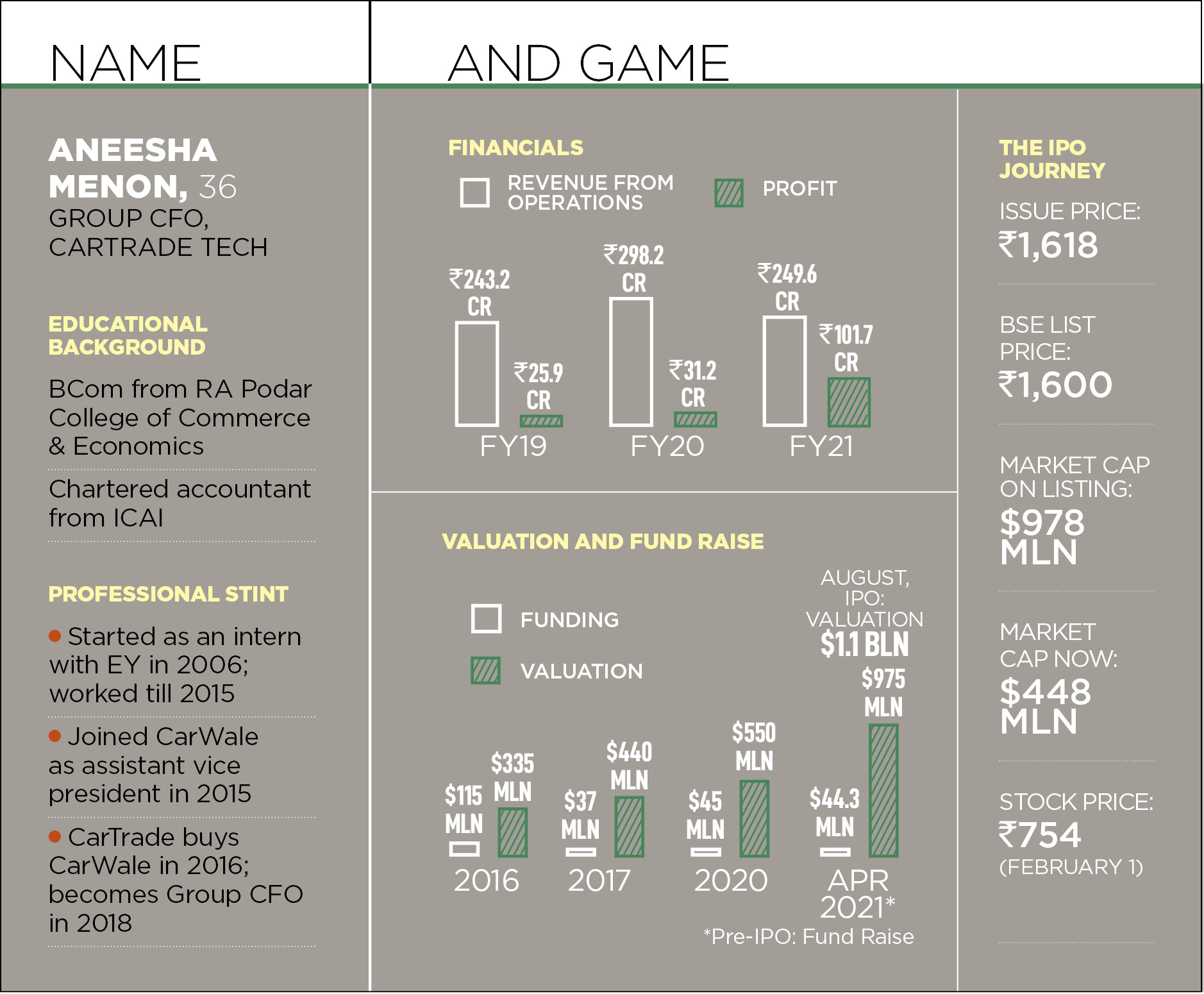 Back in August 2021, when CarTrade got listed, lady luck didn’t smile much. For a company which had been posting consistent profit—₹25.9 crore and ₹31.2 crore in FY19 and FY20, respectively—and a steady revenue—₹243.2 crore and ₹298.2 crore during the same period—a good listing was expected, if not a blockbuster one. The reality was somewhat different. The company got listed at 1 percent discount to the issue price of ₹1,618. “It felt like ouch. We deserved better,” Menon recounts.
On February 1, 2022, the stock was trading at ₹754, almost 55 percent discount to the issue price. The company reported a net loss of ₹23.3 crore for the quarter-ended December 31, 2021, as against a net profit of ₹18.2 crore for the corresponding period a year ago. Revenue, though, increased by 14.7 percent on a year-on-year basis to ₹88.8 crore.
The CFO prefers to look at the bigger picture. “I would have worried if our fundamentals were not strong,” she says. The unit economics is sorted, the company has been posting fiscal profits, and there is no debt. “Sabka time aayega (everyone’s time will come),” she says. Pointing out the challenge for the new-age CFOs, Menon reckons that the referee must not get carried away. And on a lighter note, the referee also must ensure that the ball doesn’t hit the face.