For the past two years, Tata Sky has been making strategic moves to offer not just a bouquet of TV channels but also streaming services. Now with its aggregator app and a rebranding, it is all set to capture new customers 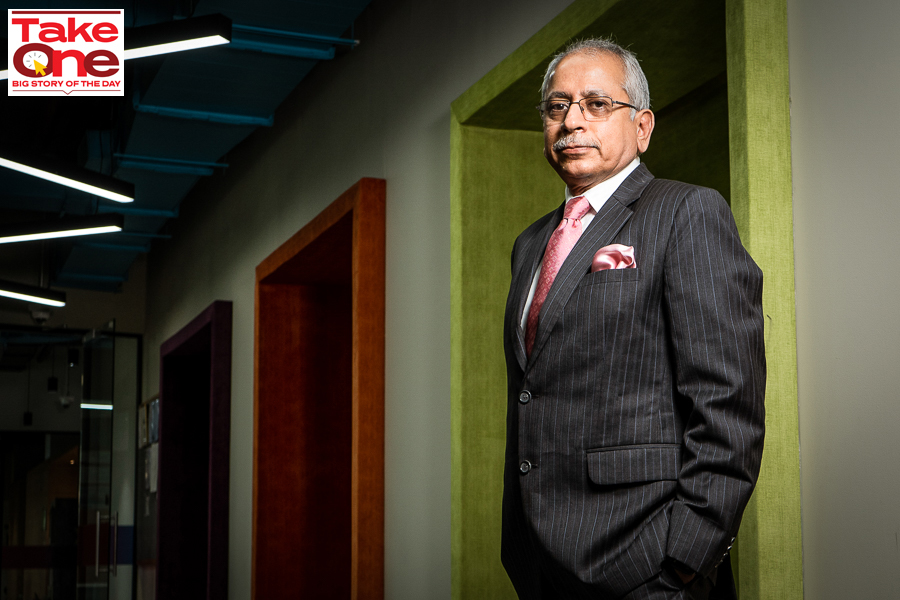 “We are retailers of content, we buy the content in bulk and we sell it in small packets. The difference in bargain and arbitrage is how we make money. So, basically we are content grocers," says Harit Nagpal, MD and CEO, Tata Play; Image: Nayan Shah for Forbes India

In the last week of January, India’s largest Direct-to-Home (DTH) operator Tata Sky, announced its rebranding to Tata Play, as part of its change in strategy. “Our core has shifted from being only a DTH operator to being a distributor of content,” says Harit Nagpal, MD and CEO, Tata Play.In addition to being a DTH operator, two years back Tata Sky also launched an Over The Top (OTT) aggregator application, now Tata Play Binge. The application has a unified front end that currently hosts 12 leading OTT applications, plus Amazon Prime Video, and offers the flexibility of single subscription and single payment. They have also added Netflix as an add-on bundled service to its vast bouquet of offerings. Along with the rebranding, the company also announced ‘Binge Combo Packs’ – it’s the first ever Live TV and OTT packs that offer the best of broadcast channels and OTT applications in integrated pack, thereby removing the headache of maintaining multiple billing cycles for each of the subscriptions. Its broadband business, which was launched in 2015, has also been rebranded to Tata Play Fiber.

Evidently, this change in strategy means convergence is the way forward. “While TV in India is not going away anytime soon, OTT video is likely to grow by leaps and bounds, with 90 percent of all internet users being video viewers in the next decade,” says Girish Menon, partner and head, media and entertainment, KPMG in India.

When Tata Sky first launched in 2006, its objective was to make it easier for a subscriber to search for content. Over the last four to five years, when a small segment of subscribers started watching content on OTT platforms, Nagpal recalls people saying, “Now that OTT is here, television is dead. And we used to tell them, India is a market of ‘ands’ not ‘ors’.”

Over time, the number of OTT applications increased from a few to a dozen. Every time a new show released on an OTT platform—be it Scam 1992, Bandish Bandits or Aarya—viewers had to subscribe to a new service. “Often, for one show, a viewer had to subscribe to a particular OTT for a full year. Secondly, we also noticed that people had to look through several platforms to decide what to watch,” says Nagpal.So in December 2019 they launched Tata Sky Binge for existing DTH customers, as an add-on service. They started with four OTT applications for the large screen first via the Amazon Fire TV stick and then later launched an Android enabled hybrid set-top box – Tata Play Binge+, too. Anurag Kumar, chief communications officer, Tata Play says, “Earlier Binge was only available on the large screen, now we have an option for subscribers to have a large screen and/or mobile version too.” After two years of testing and perfecting the application, they are looking at acquiring new customers for Binge, which today offers 12 OTT applications along with Amazon Prime Video.

However, the issue, recounts Nagpal was that, “existing subscribers were having a tough time understanding that ‘Tata Sky’—a household name for almost 15 years—could also have OTT. For them, Tata Sky meant only DTH, and OTT was apps. We felt it was time for a brand identity that resonates beyond our DTH business.”There was a long list of potential names that the team came up with. Kumar says, “But there were some objectives we had in mind: it should be a name understood by the masses, across languages; should be youthful and be associated with the category. ‘Tata Play’, we felt ticked all three boxes.” The company believes this is not just rebranding, but also telling the world that Tata Play also aggregates OTT content, and not just TV. 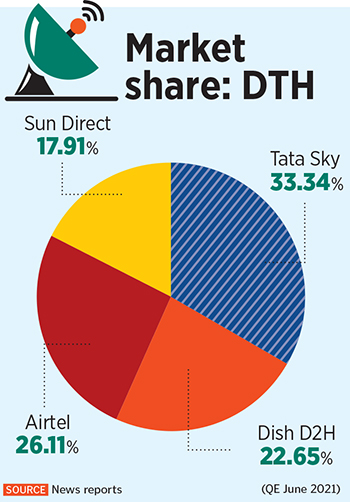 Though there are other players in this space, including Airtel Xtream, Nagpal believes there is enough space for multiple players. OTT in India currently has a market share of 7-9 percent of India’s $27 billion media and entertainment industry, and it is expected to rise to 22-25 percent by 2030, according to a CII-BCG report titled Blockbuster Script for a New Decade.Currently, Tata Play has 23 million connections for its DTH operations and about half a million subscribers for Binge. With the internet and hence OTT growing rapidly, will its focus move out of DTH? Nagpal thinks not. “Our focus will continue to be on both. Even if you have broadband, one might prefer watching live events or news on DTH and original series on OTT. Also, there is a huge mass which will not be able to afford broadband, so the two will co-exist.” Even in all these years, with a significant growth in OTT, Tata Play claims users haven’t abandoned DTH. Tata Play’s DTH market share was 33.34 percent for the quarter ending September 2021.Menon agrees that DTH players are focusing on becoming distributors of content. He says, “The fact that major DTH platforms in India also have an integrated broadband play, is likely to be a major factor in OTT content being distributed and consumed increasingly through DTH set-top boxes which are internet-enabled.”

However, even as they are aggregating OTT content, Tata Play recently contended that OTT players enjoy an advantage over DTH players. Nagpal says, “Platforms like cable, DTH and OTT distribute content, most often same, to the same set of users. However, they are licensed, censored, taxed and regulated differently. A holistic approach to level these differences is what would help eliminate this discrimination.” 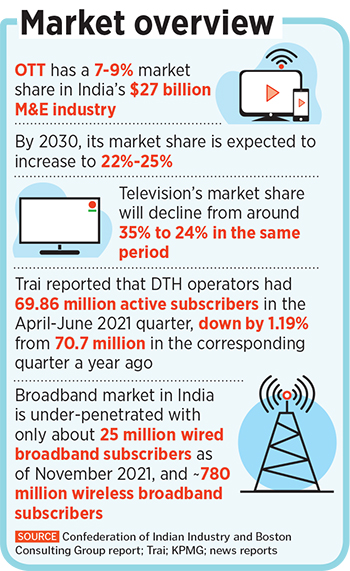 According to experts, the confluence of OTT and broadband is likely to lead to immense opportunities, as large screen consumption of OTT is picking up pace. The broadband market in India has traditionally been under-penetrated with only about 25 million wired broadband subscribers as on November 2021, and ~780 million wireless broadband subscribers, as per KPMG’s estimates.“However, the potential in this market is immense, with stated intent by various telcos to penetrate the broadband market more aggressively, targeting anywhere between 50-70 million fiber homes in the next three to four years. Broadband connections are an important enabler to continued and increasing consumption of OTT and higher speeds and data quotas are expected to drive this growth going ahead,” says Menon of KPMG.The broadband vertical of Tata Play, Tata Play Fiber (formerly known as Tata Sky Broadband) was founded in 2015, and is a subsidiary of Tata Play Limited. The segment has quite a lot of established players including Airtel and Jio. But Tata Play doesn’t have high ambitions in this area. Play’s competitors are focussing on acquiring millions of customers, but they are happy sticking to lakhs and thousands—without offering any discounts.“For Tata Play Fiber want to focus on a niche—customers who want good speed, are heavy users of broadband, don’t want a minute of downtime, and are willing to pay for it,” he says. It is only available in select areas of 16 cities including Delhi, Bengaluru, Mumbai, Chennai, Kolkata and Pune. Says Nagpal, “Like in the DTH business, with broadband also, we want to target lesser downtime and quick recovery.”Going forward, broadband will remain an essential but small part of the business. Television and OTT will be a focus area, since television isn’t going anywhere. Nagpal believes that in a country with 300 million homes, there are only 130 million pay TV homes, which means, “the potential to grow is massive”.Tata Play ties up with OTT platforms in the same way they do with TV channels. Nagpal says, “We are retailers of content, we buy the content in bulk and we sell it in small packets. The difference in bargain and arbitrage is how we make money. So, basically we are content grocers.”

Tweets by @forbesindia
From being a referee to scoring goals: Aneesha Menon, CarTrade Tech
Achyuth Jaigopal: Chai, toast, and music