Kotak Mahindra Bank, India's third biggest private lender in terms of market cap, has banked on thematic campaigns to expand its reach over the last decade 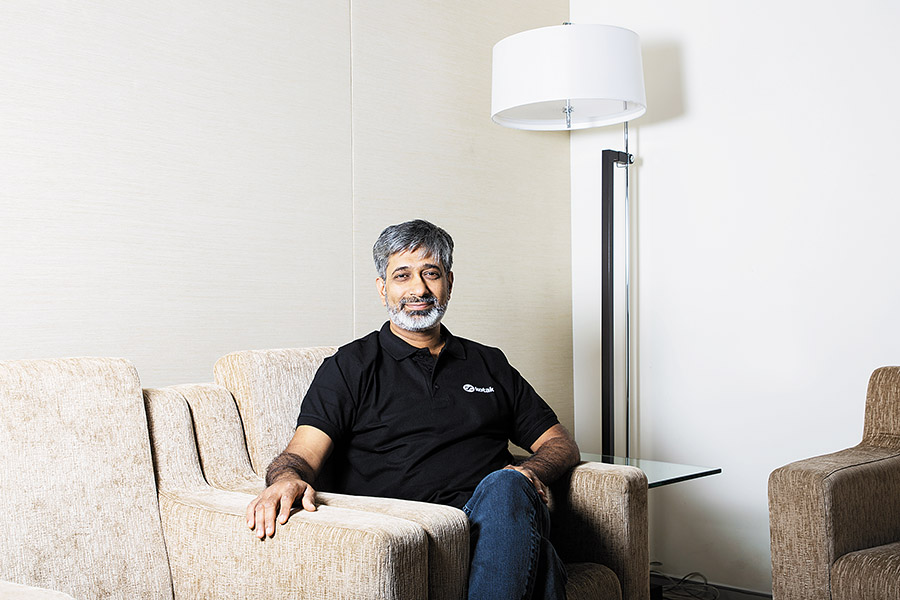 “I want to be an FMCG brand. I do not want people to think of me as a bank.” Karthi Marshan, chief marketing officer, Kotak Mahindra Group
Image: Aditi Tailang
On the 15th day of the Kurukshetra war in the Mahabharata, as the legend goes, a damning announcement crippled the Kauravas. “Ashwathama is dead. Ashwathama is dead,” lustily proclaimed the Pandavas, who executed a clever strategy devised by Lord Krishna to stop the rampaging Dronacharya, head of the rival army and father of Ashwathama. An inconsolable father thought it best to verify with Yudhisthira, the eldest Pandava brother who was known for speaking the truth. “Yes, Ashwathama is dead,” he confirmed. Although he did add in a murmur: “I don’t know whether it’s a man or an elephant.” Devastated, Dronacharya gave up his arms, and was killed. Little did he know that the Pandavas had announced the death of Ashwathama, an elephant.

Centuries later, in 2010, Karthi Marshan—who has the memory of an elephant—was getting ready to fight a Mahabharata war of a different kind. Private bankers HDFC Bank and ICICI Bank, not to forget public sector behemoth State Bank of India, were ruling the roost. Kotak Mahindra Bank (KMB), which got a banking licence in February 2003, was the new kid on the block.

Marshan came up with a masterstroke. ‘It’s great to be 25’ was what he announced, as KMB rolled out an aggressive marketing blitzkrieg to celebrate its 25th birthday. Rivals were stunned. “How can a seven-year-old bank be 25?” was the common question. Answer? In 2003, Kotak Mahindra Finance Ltd (KMFL) had become the first finance company in India to be converted into a bank. KMFL, which was founded in 1985, turned 25 in 2010. “Ashwathama is dead,” grins Marshan, who joined the bank in 2006. Feedback from consumers was overwhelming, and encouraging. “We were perceived not only old enough, but also of the right age,” adds the chief marketing officer of Kotak Mahindra Group.

Conjuring up Ashwathama was not an aberration. The bank, though, was more interested in scripting history. What followed over the next decade for India’s third biggest private lender in terms of market value was a string of cleverly crafted marketing campaigns, which made the most of the themes that landed up in its lap, either by design or providence.

Take, for instance, the move by the Reserve Bank of India to de-regularise interest rates on savings accounts in 2011. Though nobody saw an opportunity, KMB decided to increase interest rates on saving accounts to 6 percent. Marshan launched a campaign ‘6 is bigger than 4’ hitting at the 4 percent rate that almost all banks were offering at that time. The medium selected to bombard the message was the 20-20 extravaganza, the Indian Premier League (IPL), the weapon was sponsoring fours, and the message was ‘Why take 4 when 6 is more’.

At a time when consumers used to care only about interest rates of fixed deposits, KMB changed the narrative, and game, overnight. While the savings account book of Kotak was at ₹3,331 crore in the year ended March 2011, it leapfrogged to ₹79,685 crore in the year ended March 2019. What is more, in March 2011, HDFC Bank, ICICI Bank and Axis Bank were 20 times, 21 times and 13 times, respectively, of Kotak on the savings book size. By March 2019, the respective numbers had shrunk to 3 times, 2.6 times and 1.8 times.

Having a promoter like Uday Kotak clearly helps. “He has a very sharp marketing mind,” Marshan says, recalling one of the early lessons he picked up soon after joining the company in 2006. KMB, Marshan reasoned, was a long name. “Can we have a short name?” he asked Kotak. The CEO smiled, nodded, and asked Marshan to ‘think about it and come back’.

The new recruit, who had earlier co-founded retail brokerage brand Sharekhan, was influenced by the short names of internet companies like Yahoo and Hotmail. Marshan diligently started to do his homework and think of a new name. Days and hours of brainstorming did produce a result. It was a realisation that Kotak Mahindra Bank was a perfect name. Reason: In North India, without the name ‘Mahindra’ the bank didn’t have much of an identity. “We were nobody. In the North, we were Mahindra Kotak, and not Kotak Mahindra,” he recounts. “I accepted my mistake,” he says.

KMB, reckon marketing experts, proved to be the smartest of the lot. While others were bragging about their big brand ambassadors—Amitabh Bachchan and Shah Rukh Khan—KMB was making the most of the last-mover advantage. “It pulled out a rabbit from its hat,” says Ashita Aggarwal, professor of marketing at SP Jain Institute of Management & Research, alluding to the move to make the affable Vinay Pathak the face of the brand in mascot Subbu. While the move differentiated the bank, the commercial instantly struck an emotional chord with the viewers.

Another class act followed in 2015. The trigger was ING Vysya Bank’s merger with KMB in November 2014. In early 2015, Marshan launched the ‘Kona Kona Kotak’ campaign. The intent was to highlight the vast reach of the bank after the merger as ING had branches in remote corners of the country.

KMB has created a narrative that didn’t position them as a typical bank. Successful marketing, reckons Jessie Paul, founder of marketing advisory firm Paul Writer, requires a viable product and an attractive narrative. “In appealing to our better selves and promoting inclusive growth, Kotak established themselves as ‘good people to do business with’,” she says. All banks need to be trusted and this is a long-term subtle way to do this, rather than just saying “trust me”. In spite of having a celeb brand ambassador in Ranveer Singh, the brand never used Singh as a celebrity. “He was used in the context of a narrator rather than a celeb,” Paul adds.

The tactical manner in which the bank used Singh reinforced its distinct identity. The marketing campaigns of other banks, explains Paul, seem more fragmented. ICICI roped in Shah Rukh Khan for its premium banking account, but that does not flow through the other banking campaigns. They launched ‘tab banking’ in 2014 to highlight home visits for account opening with Amitabh Bachchan, but they have not retained him either. “Moreover, both Shah Rukh Khan and Amitabh Bachchan appeal to an older demographic than Ranveer,” underlines Paul. While HDFC Bank works hard and smart to ensure high visibility through a slew of digital and offline initiatives, unlike Kotak, there is no engaging thread holding the activities together.

Bold engagement, backed by relevant themes, has been the hallmark of Kotak’s marketing campaigns. Take, for instance, the move to launch 811, India’s first downloadable bank account. The trigger was demonetisation. “Imagine if demonetisation would have failed. The name 811 would have hit us. It would have looked as if we were dancing at a funeral,” recalls Marshan. The bank doubled its customer base in 18 months to 16 million by September 2018.

If 811 was a risky bet, celebrating the wedding of Ranveer Singh, who became the face of the brand in June 2018, was a fun moment. As the buzz around Deepika Padukone and Singh’s marriage got amplified across the country, Kotak launched a campaign ‘Card Mila Kya?’ (Did you get the card?). The punchline hinted at Singh’s limited edition debit card, as well as an invitation card to the much-anticipated wedding. The fun didn’t end there. Sweets were distributed, and the marriage was celebrated. Banks, Marshan says, are not expected to do such things. “But I do not want people to think of me as a bank. I want to be an FMCG brand,” he says.

Dipak Gupta, joint managing director of KMB, too harps on the non-traditional, ‘unbank-like’ approach of the bank in its communication and advertising. Banking and finance, he lets on, generally tends to be intimidating and complex to a lay consumer. “We consciously opted to make banking feel simple, convenient and inclusive,” he says. From the launch of the ‘India Invited’ campaign talking about inclusive banking to the latest one called Dreams Invited—showcasing the rising aspirations of the nation—Kotak has got its act right. “Many of our campaigns,” Gupta explains, “were probably ‘bold’ because they didn’t look or sound like bank campaigns”. This approach has played out well for the brand. “It has given us mind share that’s disproportionately high in comparison to our market share or network presence,” he adds.

Marshan, meanwhile, is getting ready to bring back Ashwathama from the wilderness. “He is alive. I am waiting for the right time, and opportunity,” he says smiling.