With its app solving problems in real time, Doubtnut is looking to crack a student community beyond urban, brick-and-mortar classrooms 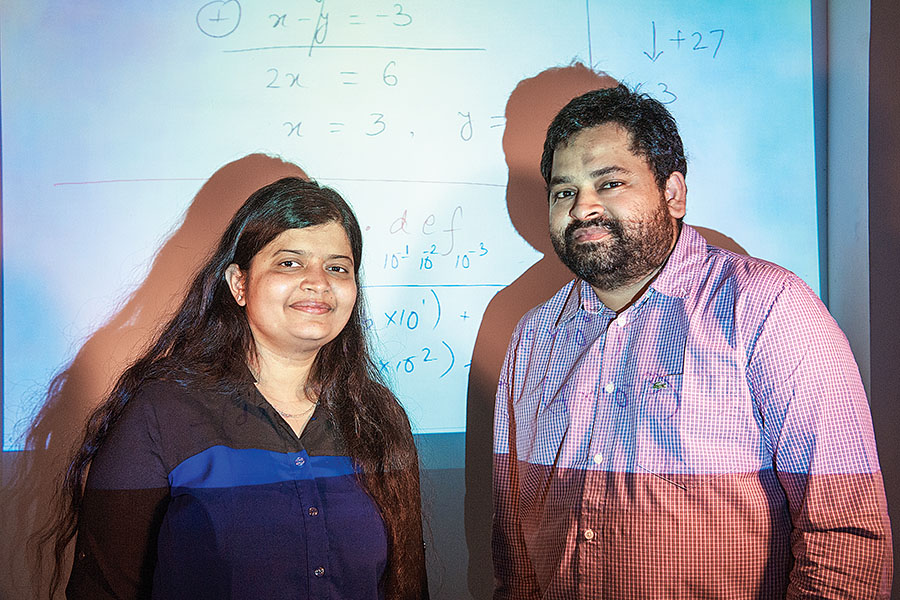 Aamir Mohammed Raza is determined to crack the IIT entrance test and become an engineer. But Bhagat Public Senior Secondary School in Alnia, a dusty town in southern Rajasthan’s Kota district, isn’t known for churning out toppers. “By the time I was in the 11th [standard], I had lost interest in math… I wasn’t able to understand the concepts well,” says the 18-year-old, who now studies in class 12.

Three months ago, he happened to run an internet search for a mathematical concept he wanted clarity on and chanced upon a video by Doubtnut on YouTube. It gave him a step-by-step solution to his query. Pleased with the explanation, he downloaded the Gurugram-based startup’s app. Today, he simply takes a picture of the math problem he can’t understand, uploads it on to the app and receives a video solution within moments. “Now, math is so much more fun,” says Raza, adding that he uses the app for 40 minutes to an hour every day.

Set up by the husband-wife duo of Tanushree Nagori and Aditya Shankar, Doubtnut uses AI technologies for image recognition, natural language processing and proprietary machine learning algorithms to throw up solutions to students’ queries. The app is Nagori and Shankar’s second entrepreneurial venture in the education space. The IIT-Delhi alums worked in strategy and consulting across India and the US for a few years before setting up Class 21A in 2009, where they taught math and science to students between class 9 and 12. “Education was always close to our hearts,” says Nagori.

But it didn’t take them long to figure out that their classes needed a boost of technology. Within a brick-and-mortar classroom, they couldn’t cater to individual queries due to the poor student-teacher ratio; besides, students would shy away from asking questions for fear of being ridiculed.
They came up with a quick-fix solution. Since students were already acquainted with the topic at hand (having been taught at school), Nagori and Shankar encouraged them to list out their queries before their scheduled 21A session. Based on those doubts, they would create explanatory videos and WhatsApp them to the students. Learning outcomes improved dramatically, as did 21A’s batch sizes, thanks to the individual attention. “It was a win-win situation for the students and us,” says Nagori.

But only up to a point. After all, their core offline offering wasn’t exactly scalable.

In mid-2015, while still running 21A, the couple launched a single page app to test their full-throttle tech offering: Students could take a picture of their doubts and send it via the app. They would, in turn, create videos and WhatsApp it to them in a few days. “This helped us maintain a history of questions,” says Shankar.

Encouraged by the uptake, they incorporated Doubtnut (under Class21A Technologies Pvt Ltd) in July 2016 and spent the next six months refining the technology and creating a repository of videos. By January 2017, they were fully ready with the app version of Doubtnut. Over another six months, as students uploaded questions onto the app, a techie manually matched those to the video solutions. If the required videos weren’t in the repository, the team would create a video and send it to the student within eight hours. All the while, the algorithm Shankar created ran in the background and learnt how best to match query with solution. Finally, by September 2017, the fully automated version of Doubtnut was launched.

Today, the app boasts of an 85,000-video repository catering to students aged 14-19 years. This allows Doubtnut to answer 90 percent of the questions—whether computational in nature or word-based problems—in real time. Shankar is quick to point out that while other apps that allow students to click pictures and get answers to their queries across a breadth of subjects are available globally—most notably US-based Socratic—as far as mathematics goes, they only allow computational queries. The algorithm that allows Doubtnut to process word-based problems is proprietary, he says.

“ We first want to become a habit-forming app for students. Thereafter, we will look at subscriptions.”
Tanushree Nagori, co-founder, Doubtnut

Already 176,000 students have downloaded the app and ask about 8,000 questions daily. While the service is free for users, the team intends to put in place a subscription-based model in future. “We first want to become a habit-forming app for students, so right now, we’re focussed on engagement. Thereafter, we will look at subscriptions,” says Nagori, who isn’t ruling out an ad-supported model either.

Further, all the video solutions are presented in colloquial ‘Hinglish’, and the app, which can currently be navigated in English only, will be available in 11 regional languages later this year. It’s not just users from metro cities who are logging on to Doubtnut, says Nagori, but also those from small towns and villages, like Alnia’s Raza. Maximum uptake has been seen across Bihar and West Bengal from where 50 percent of all users come, she adds.

“Unlike other edtech companies that are a push business, in that they create a large number of videos with explanatory content and sell it to parents, Doubtnut is a pull business. Students come to the platform in search of answers,” says Sarbvir Singh, partner at WaterBridge Ventures, which backed Doubtnut with a ₹3.5 crore pre-Series A investment in March this year, along with Omidyar Network.

Singh’s argument is backed by a May 2017 study by Google and KPMG, which found that a lack of real-time “query resolution” was the biggest barrier to the adoption of online courses. Doubtnut’s offering then serves as a hook to lure students on to the platform.

However, while it may currently be the only startup in India to offer a real-time doubt resolution service, it’s not hard to imagine heavyweights like the Tencent-funded Byju’s building a similar feature. “It’s not,” concedes Singh, “but Doubtnut has the first-mover advantage. Plus, if the team is able to create a sticky community of users, that’s a strong moat.” Moreover, the videos, once created, can be used multiple times, reducing the marginal cost of making each video to zero over time. This keeps the cash burn minimal and the solution completely scalable.

“It’s the next half billion users just coming online who we’re targeting. We want to help them using technology,” stresses Nagori. Or, as Raza puts it: “It’s like having one-on-one tuitions at the click of my phone.”

Tweets by @forbesindia
AI, a boon or bane? That is the question
The vibrant and sophisticated style of Bombay Art Deco