Despite the legacy of her grandfather, she's proving herself 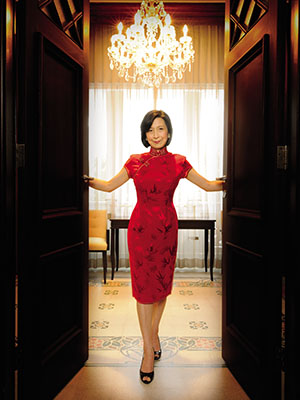 Chew Gek Khim recalls a day in her early 20s when she was shopping with her maternal grandfather, wealthy Singaporean banker and philanthropist Tan Chin Tuan. They ended up in a jewellery store where she wanted to make a purchase, but he balked and tried to dissuade her. Finally he said, “You know, Khim, diamonds don’t pay dividends.”

“It was a very clever comment,” says Chew, the 52-year-old executive chairman of Straits Trading, one of Singapore’s most venerable companies, whose fortune originates in tin. “It suddenly made me realise that there is a big difference between an item of show and something that generates a return.”

That value continues to resonate as Chew builds on the family’s corporate legacy. Following instructions from her late grandfather—who built up and nurtured some of Singapore’s best-known companies while chairman of Oversea-Chinese Banking Corp (OCBC) in the mid-20th century—Chew wrested control of Straits Trading in 2008 in a high-profile bidding war. She has since launched ambitious reforms to transform the 126-year-old firm, with its hodgepodge of interests, into a dynamic holding company with three core businesses—resources, property and hospitality—and strong cash flow. The past six years have been “phase one,” Chew says, as she diversified holdings to unlock shareholder value.

The incubation period didn’t yield immediate results. Profitability rose and fell as the firm made provisions in line with Chew’s vision. But last year marked the end of that period, says Chew. A series of divestments left the publicly listed firm cashed up, allowing her to clinch key tie-ups in both hospitality and property that should give Straits Trading a significant Asia-Pacific presence and higher returns. The company, which has a market capitalisation of $1.2 billion, is expected to post a net profit for the year ended December 31, following a net loss of $44 million in 2012.

Straits Trading’s roots lie in colonial-era Singapore. Resources were the lifeblood of the region, and a Scotsman and a German saw an opportunity in tin and launched smelting operations in 1887. Straits Trading soon became one of the biggest tin smelters in the world. It survived the Great Depression and two world wars, and was eventually acquired by OCBC in the 1950s under Chew’s grandfather. (Other OCBC investments by Tan at that time included Raffles Hotel, Singapore retailer Robinson & Co and beverage conglomerate Fraser & Neave.)

Chew grew up in her grandfather’s house, a two-story mansion just off Singapore’s tony Orchard Road. “I was very sheltered,” she laughs, recalling her life as a student. “The only job I had was working for my grandfather when he got cross with me for lounging around the home.”

She graduated from the National University of Singapore in 1984 with a bachelor’s degree in law. She went to work for local law firm Drew & Napier, specialising in corporate law and gaining valuable life lessons, she says, in perseverance, hard work and dealing with people. Three years later, she quit to join the family’s investment group, Tecity.

Over the next 20 years, Chew worked with her grandfather and parents at the family-owned entity, which comprised an investment arm and her grandfather’s foundation, eventually joined by her younger sister and brother. In his final years, Chew says, she began to have a lot of conversations with Tan (who passed away in 2005). “Not just about going forward or the family business,” she says, “but also dialogues about money, the foundation, society. It was quite holistic.”

By this time, Singapore was emerging as a world financial hub. Under a programme introduced in 1999 to strengthen the banking sector, local banks were required to divest non-financial businesses. Consequently, OCBC faced unraveling its holdings in the stable of companies Tan had spent his career building. Anticipating this, Tan had a brief for his granddaughter: Buy at least one of my companies. Moves by Chew, now executive chairman of Tecity, in 2005 and 2006 to acquire Raffles Hotel and Robinson, respectively, didn’t pan out. But, in January 2008, she made an offer for Straits Trading, triggering a bidding war with OCBC founders, the wealthy Lee family. (The Lees owned about 7 percent of Straits Trading and controlled about 33 percent through shares in OCBC and its affiliate, insurer Great Eastern Holdings.)

The island nation watched as two of Singapore’s most prominent families seemingly went head to head. The Lees counterbid twice before Tecity issued its final price, which valued the company at about $1.7 billion. The Lee family and other shareholders accepted Tecity’s offer, giving Chew an 89 percent stake in Straits Trading. Chew dismisses any emotive element to the deal. “It was a corporate move,” she says, later adding that the relationship between the two families remains friendly.

Her first moves at Straits Trading were largely to shore up the company. She streamlined its investments into three businesses and strengthened fiscal discipline. She also initiated changes at its tin operations. In 2010, listed subsidiary Malaysia Smelting— one of the largest producers of refined tin in the world—sold its non-tin assets and expanded its focus to mining, a natural extension, Chew says, to create an integrated business. 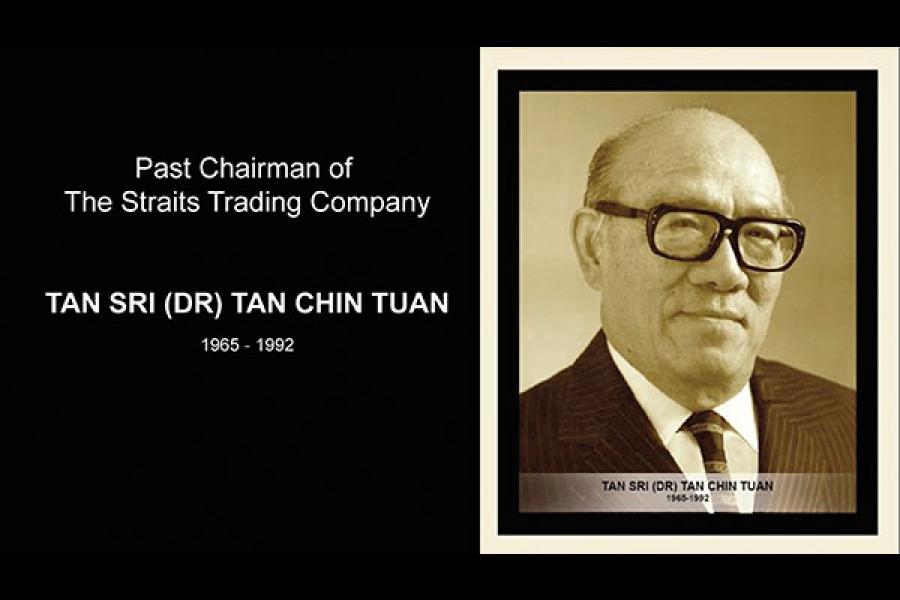 Grandfather Tan Chin Tuan was philosophical about the meaning of money, sharing his years of experience with Chew
But the bigger changes lay else-where. In November 2012, Chew restructured its lossmaking hotel division, selling its hospitality- management business to Singapore’s largest property developer, Far East Organization. Under the deal, Straits Trading sold two hotels for $224 million to Far East. At the same time, it entered a joint venture with the developer in which Straits Trading injected three hotel properties and 13 management contracts in exchange for $44 million in cash and a 30 percent stake in the new company, which is now one of the largest hotel operators in Asia, with more than 13,000 rooms under management across 80 properties in eight countries.

That same day, Straits Trading announced it was boosting its stake in Singaporean automotive distributor WBL (also known as Wearnes), another company in the OCBC stable whose portfolio includes Chinese real estate. Chew’s move to own 45 percent of WBL triggered a mandatory general offer, effectively sidelining the stake controlled by OCBC and the Lee family. Enter United Engineers (also an OCBC affiliate), which in concert with OCBC, Great Eastern and the Lees counterbid twice and ultimately paid $725 million for a 96 percent stake in May. United Engineers at the time said it saw an opportunity in WBL and approached OCBC-linked parties, not the other way around.

Chew walked away with $400 million, returning 40 cents a share to shareholders as a special dividend. “We quite respect what she’s done,” says Hugh Young, managing director of Aberdeen Asset Management Asia, which exchanged its shares in WBL for a 6 percent stake in Straits Trading as part of the WBL bid. The fund manager said both had been pressing management at WBL for years to make changes, but without result. “Khim came up with a clever trans- action to consolidate stakes”, bid for the company at a reasonable price and then wisely decided to monetise after United Engineers’ counteroffers pushed up the amount.

“Certainly the legacy of her grandfather is important. But, in her own right, she’s proving herself,” Young says.

Straits Trading was now flush with cash, and the company put it to use tackling its low-yielding invest- ment property portfolio. In October it bought a 20 percent stake in one of the largest real estate fund managers in Asia, Singapore-listed ARA Asset Management, which is partly owned by Hong Kong billionaire Li Ka-shing, for $232 million in cash and shares.

Chew also set up a vehicle with ARA Chief Executive John Lim to create funds to invest in property across Asia and likely Europe with a commitment of $748 million in seed money—$670 million from Straits Trading and the rest from Lim’s family office. (In addition, ARA will manage Straits Trading’s $670 million real estate portfolio.) Both say they share a vision to grow the ARA business through their combined network and capital and that of Li’s property group Cheung Kong.

While Lim and Chew had discussed the possibility of a tie-up since meet- ing three years ago, Straits Trading’s sale of its WBL shares presented the opportunity, according to Lim, and the deal was cut between the two during several meetings over coffee. “She sees things very clearly and has the ability to negotiate a deal that is win/win for all parties,” says Lim, who himself owns 3.5 percent of Straits Trading.

Chew has rolled Straits Trading’s assets into vehicles with strong growth prospects and meaningful scale, and the firm now has a solid balance sheet to pursue acquisitive growth that can add new income streams, says Goh Han Peng, an analyst at securities firm OSK-DMG. “The challenge will be in finding the right type of assets and businesses at the right price in a high-liquidity environment.”

Tecity’s stake in Straits Trading currently stands at about 73 percent, which Chew says she would like to reduce further while maintaining control of the company. Phase two of her overhaul includes attracting families, both in Singapore and abroad, who share the same investment philosophy as Chew, based on a long-term view, wealth preservation and safety in times of crisis.

Chew ascribes her motivation to a strong sense of responsibility. “I was given a brief to do certain things. Without that brief I may not have undertaken such tasks; I probably would have stayed in the family office,” she says. It’s also important to grow as a person, “using your abilities and strengths, and each time trying to do a little better”.

In addition to 34 directorships, Chew is deputy head of the family’s philanthropic arm, which follows a similar philosophy as its business: Supporting projects with good governance and accountability to ensure a multiplier effect for each dollar donated. Chew refers to an argument with her grandfather where she advocated paying a lower price for a company they wanted to buy. “He lost his temper and asked, ‘What is money for?,’ then walked out of the room. It made me stop and think that when you buy something, it’s not just about buying to make money, there’s a purpose. You can use money for many things, hopefully for good.”