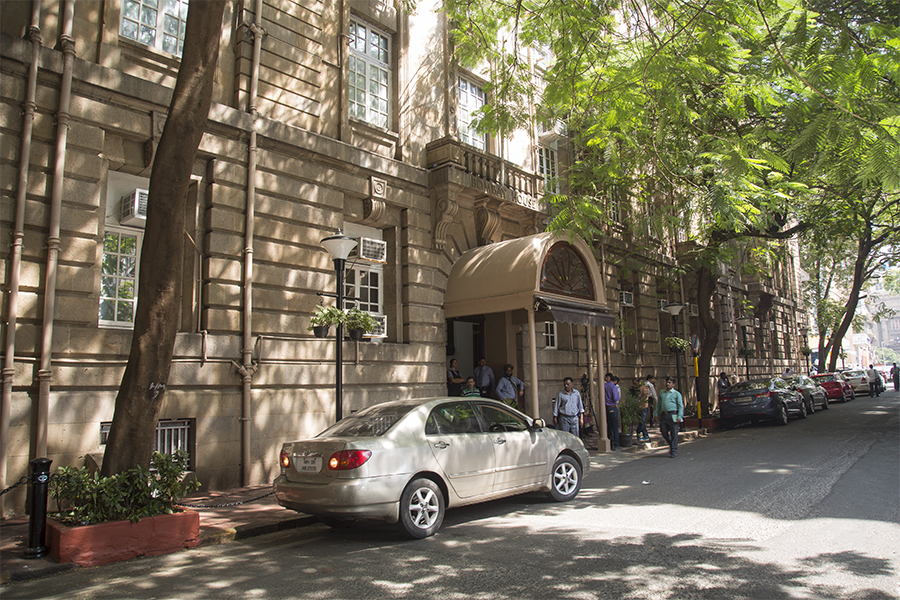 Image: Joshua Navalkar
Bombay House serves as the head office of the Tata Group
On a day when Cyrus Mistry, the recently ousted chairman of Tata Sons was also replaced as chairman of (Tata Consultancy Services), the $103 billion-conglomerate served its former chairman another blow.

Since Mistry, son of Pallonji Mistry – the largest outside shareholder of Tata Sons with an 18.4 percent stake, was replaced with 78-year-old Ratan Tata as the interim chairman of salt-to-software group on October 24, various stakeholders, including shareholders, employees, regulators and the media have been asking questions of the business house, seeking an explanation for what transpired.

Mistry’s position and version of events was already clear to the public at large after a letter that he wrote to the trustees of Tata Trusts (majority shareholder in Tata Sons with a 66 percent stake) and directors of Tata Sons became public information. On Thursday, it was the Tata group’s turn to respond to Mistry’s “letter bomb” and it did so with a nine-page-long statement.

The essential contents of the statement can be summarized as follows:
• Falling dividend payments from group operating companies to Tata Sons (excluding dividend received from TCS, which repatriates a portion of these dividends to Tata Trusts for its philanthropic work, was a matter of grave concern for the group.

• Tata Sons was unhappy with the progress made by group operating companies, especially those riddled with challenges such as Tata Motors’ passenger cars division, Tata Steel Europe and Tata Teleservices, under Mistry’s leadership. The promoters felt that taking impairment charges on account of stressed assets wasn’t the appropriate way to revive growth.

• Promoters of the Tata group of companies were miffed with Mistry for indicating (directly or indirectly) that the operational challenges at group firms he was faced with were a result of the legacy left behind by his predecessor, Ratan Tata. Tata Sons also pointed out that its statement that TCS and Jaguar Land Rover – the two big cash-earners for the group were also a part of Tata’s strategy.

• Tata Sons alleges that Mistry was trying to dismantle the conglomerate structure that the 148-year-old business house had followed and sought to make the holding company and the trusts irrelevant. This, according to the statement, was evident that there were no common directors on the boards of group companies and Tata Sons.

• The group accused Mistry of deliberately trying to corner control of Indian Hotel Co. Ltd (IHCL) with the support of independent directors by “frustrating Tata Sons’ ability to exercise influence and control on IHCL.” The statement further adds that the promoter shareholders had expected Mistry to voluntarily step down as chairman of many group companies after his replacement as chairman of Tata Sons.

Sources close to Mistry have, earlier, responded to many of the points raised by Tata Sons its statement issued on Wednesday.

It remains to be seen whether Tata’s detailed explanation of its version of events will soothe investors’ nerves or fray them further; and how the Mistry camp will respond to Tata’s fresh salvo.

Meanwhile, here is the full text of Tata Sons’ statement

Later in the evening, sources close to Mistry responded to the charges leveled against the former chairman by the Tata group.

These sources indicated that after 17 days of silence on the sudden removal of Cyrus Mistry as chairman of Tata Sons, the holding company’s nine-page statement had only “selective data” and “unsubstantiated claims and half-truths without a word of explanation as to why it became necessary to remove him summarily violating natural justice.”

Here are some of the points raised by Tata Sons in its statement and Mistry camp’s response to them:

Tata Sons: For assessing the results during his tenure, it would indeed be appropriate to exclude the income (i.e. dividend) from Tata Consultancy Services (TCS) because Mr. Mistry does not really contribute materially to TCS’s management and TCS has needed no funds from Tata Sons for its growth. In this way, it will be seen what Tata Sons has been getting from all the other 40 companies (listed and unlisted) in its portfolio.

Mistry camp’s response: To remove TCS from the data contending that “Mr. Mistry does not really contribute materially to TCS” and to blame him for all problems inherited by him such as Tata Motor’s passenger vehicle business in India is inherently fallacious to any unbiased observer.

Tata Sons: In addition, there were some significant issues of conflict of interest in relation to the Shapoorji Pallonji Group which he did not fully address.

Mistry camp’s response: To say “in addition, there were some significant issues of conflict of interest in relation to the Shapoorji Pallonji Group” with nothing to show for it is a smear campaign unworthy of either the Tata Group or a response, particularly when it known that Mr. Mistry had instructed all Tata companies not to enter into new contracts with that Group.

Tata Sons: The recent development in the Indian Hotels Co. Ltd. (IHCL) now seems to reveal the true colours of Mr. Mistry and his ulterior objective. Having been replaced as the Chairman of Tata Sons, where the majority of the Board and the major shareholders had expressed lack of confidence, Mr. Mistry is trying to gain control of IHCL with the support of the Independent Directors of the Board. He has cleverly ensured over these years that he would be the only Tata Sons representative on the Board of IHCL in order to frustrate Tata Sons’ ability to exercise influence and control on IHCL.

Mistry Camp’s response: To allege “ulterior motive” of taking over control of companies, giving the example of Indian Hotels only because independent directors, one of whom is also a director of Tata Trust, demonstrated true independence is not in keeping with Tata governance standards.

Sources close to Mistry also stated that Tata Sons’ admission, in its statement that it received several emails and calls from many across the globe since the board decided to change its chairman was confirmation of the information asymmetry that existed.

“All the reasons in the letter, would have, and should have, been tabled and recorded in the minutes of the many Tata Sons board meetings held over four years of Mr. Mistry’s Chairmanship,” the source said.  “Unfortunately for them, no such record exists because these allegations are simply not true. The reasons were not tabled even on October 24. That after 17 days, this is the best that can get said is heart-warming.”

One thing is clear: as the battle intensifies and the action shifts to the group operating companies and their boards, both sides are now in overdrive to shape public opinion to their respective benefits.