For Vikas Oberoi, Understatement is the Hallmark of Luxury

Understatement is the hallmark of good taste, says the owner of Oberoi Realty and a member of the Forbes India Rich List. And the biggest failure of a luxury-seeker is the tendency to drop names 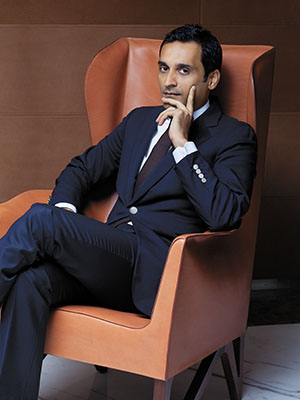 Image: Toranj Kayvon
Money is necessary to buy luxury but one needs to have taste

Coco chanel, iconic French fashion designer and founder of the Chanel brand, had famously said: “Some people think luxury is the opposite of poverty. It is not. It is the opposite of vulgarity.” Ask Vikas Oberoi what luxury means to him and he inadvertently channels Chanel’s core values: Understated elegance, no fuss, less crass, more class. “For me, luxury is about excellent finish, great craftsmanship, appreciation of minute details, history and legacy. Whether it is watches, a bottle of wine, clothes, shoes, travel, where you travel and where you stay—it could be anything. Money is necessary to buy luxury but one needs to have taste,” he says during a conversation with Forbes India. The property magnate is rounding off a busy week. He has just returned from a series of roadshows with investors around the world: Hong Kong, Singapore, New York, Boston and London. Now, seated in his tastefully done-up office at the Westin in Mumbai, Oberoi, 44, shares a measured perspective on luxury.

“To me, it is very personal. It’s something one needs to grow up with–it cannot be acquired,” he says, inadvertently stinging nouveau-billionaires who pin their high-flying hopes on designer wear. “You can’t just write a cheque for something expensive and be connected to it. It has to blend into you.” You can see that he blends exceptionally well into the Tom Ford suit he has on. (He has 10 of them, all in different shades of grey.) But he doesn’t let you point that out—he is on a philosophical trajectory. Luxury sits very quietly in his closet, he says. “And unless probed very deeply, I don’t like to talk about it.”

Where Work and Life Meet
That may be true for his personal space. But its significance to his work is obvious. Luxury, and how it is defined, is of more relevance to Oberoi than to many other billionaires on the Forbes India Rich List. After all, it is the foundation on which he has built his business, Oberoi Realty. Listed in 2010, the company has built 36 projects, covering five million square feet, in suburban Mumbai, and with insignificant debt at that. Most of these developments, both commercial and residential, are in the upscale, premium segments.

Real estate analysts regard Oberoi’s projects responsible for the transition of Goregaon from a sleepy Mumbai suburb into a real estate hotspot where apartments are being bought and sold for the equivalent of millions of dollars. A decade ago, this was inconceivable. The area was considered beyond city limits. Film crew would trek across for shoots; and the government staff would source milk from dairies at Aarey colony. Now, the place is alive with the clatter of construction activity since other developers have inevitably jumped into the fray. “Goregaon East has gentrified and boasts of malls, schools, housing and offices. The appreciation in residential real estate prices is astounding. Rates have gone up from Rs 9,000 a square foot to Rs 15,000 in just five years,” says a real estate analyst.

Oberoi Garden City at Goregaon is what builders call an integrated development plan. The luxury residential projects and commercial property are supported by a five-star hotel, the Westin, the Oberoi mall on the Western Express Highway, and an international school. The social infrastructure has helped people get comfortable about travel and, hence, living in the locality. “We had to create oases for our customers,” says Oberoi. “Places where they could pamper themselves.” Once these were available, they were happy to move in.

His strategy is simple: To associate every product with pride. “If I was the owner, what would my life be like? I want to entertain two couples: How would that living room look? How would people sit? At the end of the day, your house is a huge social visiting card. When you call people over, you show them that you’ve arrived in life,” he says. “Today, the way people socialise with others who have a similar financial standing, taste, education… everyone is subtly competing. If someone has a better house, someone else aspires to have a bigger living room. That’s not bad—that’s how society prospers and evolves.” 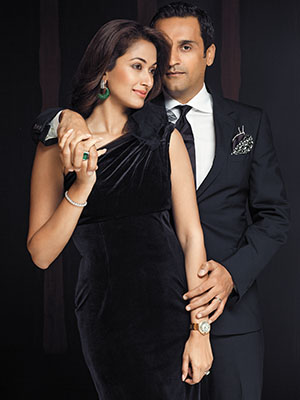 Image: Toranj Kayvon
Gayatri and Vikas Oberoi
Oberoi describes himself as a major filter for his team—they freely pitch their ideas to him. These could be about an open kitchen plan in the apartments or a design tweak to the windows. The challenge is to create spaces that will appeal to customers and this involves trial and error, he says. The specifications of the ‘oases’ emerge from his insights into the thought process of the high-end customer. “Design is a part of what he is—and it is obviously also an important part of his profession,” says wife Gayatri.

Have Taste, Will Buy
The subtler nuances of the good life are captured by the couple at home too, and are inevitably attached to a personal story. For instance, when they sit down for a drink with friends at their Juhu home, memories of a late summer evening spent in Italy not so long ago come wafting back. After a day of absorbing the architectural wonders of Venice, they had stopped at a bistro, with a remarkable view at the Piazza San Marco, for a quiet drink. The wine, an Italian red, arrived in large hand-blown glasses, a kind the couple had not seen before.

The sommelier told a curious Gayatri that the balloon glass she was sipping from, in fact, had a name. It was called the Big Raf, after Raffaele ‘Raf’ Alajmo, one of the two brothers who owned the Michelin-starred restaurant they were at. The extra-large rim allowed the wine to breathe, making it taste exceptional. The restaurant had the glasses for sale and the couple were glad to get them for their bar at home in Mumbai. In many ways, this set of Big Rafs epitomises what luxury means to them: The joy of being able to have well-crafted beautiful things around them, especially those with an emotional connect.

Oberoi admits to being a late-comer to the wine trail. “I came in with the initial thought that alcohol was taboo. Only after I turned 27 did I start understanding wines. I got into [noticing] the grapes, the years, estates and who does what,’’ he says. It has been a decade since, and while he has begun to appreciate French wines, he believes Italian vino is consistently under-rated. The Sassicaia are recognised for their Bordeaux-style reds, he says about the Tuscan wines that barged into the world in the 1970s, but the snob value of the (French) Château Latour continues to hold sway. Even among French wines, the hold of the Bordeaux vineyards is probably the strongest. Gayatri says their choice of what to drink depends more on the food and the mood, rather than the provenance. “Wine lists can be extensive but, most often, our choice is based on what we’ve consumed and liked. The bottle certainly needn’t be the most expensive on the list,” she says.

Meanwhile, Oberoi is not doing too badly for an oenophile who started late. He has even graduated to single malts. “I was introduced to single malts by friends two years ago, and I have begun liking them,” he says. But beyond the wine and whisky, cars and watches, shoes and clothes, luxury is about having something you really appreciate. Like family time. “The luxury of time with the family is of huge value. The ability to switch off the phone and spend two-three days together,” says Gayatri.

It is obvious that quality would matter to Oberoi. He is, after all, to the manor born, having had the fortune of wealth from an early age. What matters is the class with which affluence is worn: “The minute you name-drop, it’s dead.” 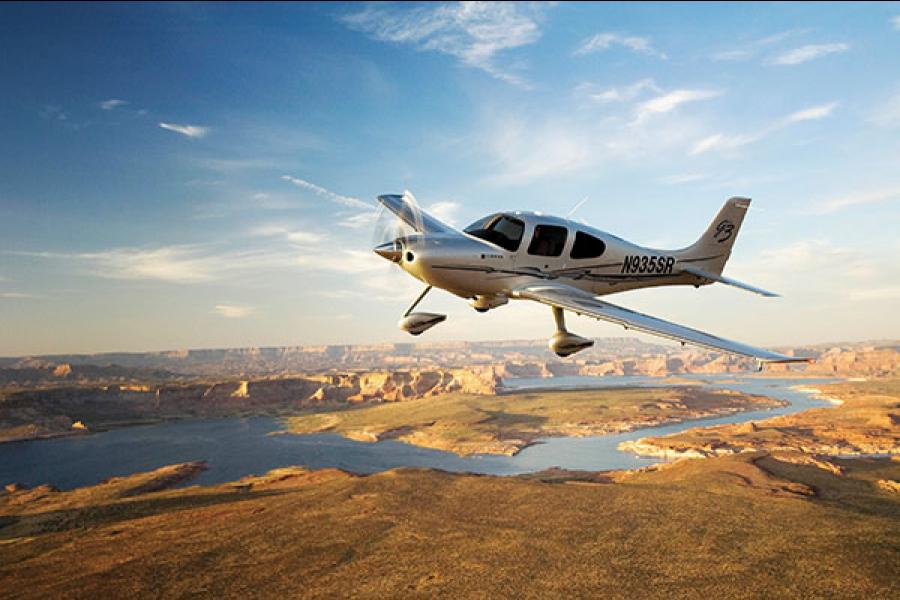 In the Third Dimension

When you think of businessmen flying, the first image that comes to mind are suits striding purposefully towards a Learjet. But corporate jets are not everyone’s preferred wings. For the past three years, Oberoi has been heading to the Juhu aerodrome every Sunday morning to take his small, single-engine Cirrus S22 four-seater up for a spin. But, most often, he flies solo or with his instructor.

Oberoi gives the Bombay Flying Club a good name, says an old-timer from the club. Though it is India’s oldest, having opened in 1928, the club had lost its sheen over the years. Flying had reduced because it was located next to a very busy Mumbai international airport and also because its runway was out of action during the monsoon. But with enthusiastic fliers like Oberoi, things are improving.

“Mihir has made a big difference,” says Oberoi, referring to Captain Mihir Bhagwati, the club’s dynamic chief flying instructor. Flight plans are easier to file, and can even be emailed, he says. “I fly practically every Sunday, if possible even twice a week,” he says. Even on weekdays, he tries to leave work by five, and squeeze in half an hour of flying. This is mostly ‘local flying’—from Mumbai to places like Goa, Surat, Ahmedabad and Ujjain. “Unfortunately, it’s just 180 degrees because one side is the sea, but we’ve mapped every airport that comes up,’’ he says.

Goa is his favourite place to fly to because the route is beautiful. The Cirrus is unpressurised, so flying is usually below the clouds, at about 500 feet, and offers a great view. You have the mountains on one side and the sea on the other.
Flying was on his list of ‘10 things to do in life’, says Oberoi. Does he plan to buy one of ’em business jets anytime soon?  “I have thought of it often,” he admits. “But it’s not about possessing anything bigger or making a statement to the world. Anyway, it is not easy to own a plane in India. You don’t get landing permission in Mumbai—you have to send the plane to Ahmedabad. It’s really inconvenient.”

Oberoi also does not see himself graduating to a different kind of sport aircraft. “I don’t want to upgrade or anything. That would mean lesser flying and more automation. I certainly don’t want that. I have a glass cockpit, autopilot and all the modcoms (modern communications) a pilot needs. The beauty of this plane is that you have to fly it,” he says, clearly in love.