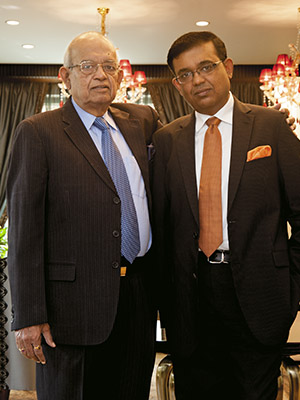 The town of Douai in north west France is known today for its Renault factories, but some of its industrial foundations were laid about 150 years ago, when Lucien Arbel began forging parts for railway carriages. A century of manufacturing expertise gave Arbel Fauvet Rail (AFR) a niche position in the market, using its 15 patents to deliver specialised wagons to high-end clients.

Unfortunately for AFR, the onset of the Eurozone crisis in 2007 derailed its gravy train. Since then, it started making losses and in 2009 the losses reached a peak with €19 million. That year, AFR filed for bankruptcy and a year later went into liquidation.

JP Choudhary, chairman, Titagarh Wagons, noticed the troubles AFR was passing through. Perchance, Titagarh Wagons and AFR were working on a joint project on wagon design in 2008. It was clear by 2010 that AFR had valuable intellectual property and, if properly managed, it could be an asset for an emerging market wagon company.

Choudhary says, “AFR stood out because it was an excellent facility with good equipment and skilled labour. Its location in the north of France was also desirable as the region was famous for its rail technology—especially design capabilities.”

AFR had seen hard times before. The factory had been razed to the ground during World War I and the company had survived numerous changes in ownership thereafter. But the Eurozone crisis was one blow the veteran French wagon manufacturer could not recover from. By 2010, employees were being laid off en masse, the order book was near empty, confidence ran out among all stakeholders and the company went into liquidation. The cliff had come and AFR had run out of track. Or so it seemed.

At this point, Titagarh Wagons sniffed an opportunity to pick up a top-of-the-line European asset at a bargain price (roughly Rs 100 crore). It went ahead and acquired AFR in July 2010. While French industry minister Arnaud Montebourg may be castigating NRI steel baron Lakshmi Mittal for closing plants and sacking workers, in this case Choudhary and his team have given AFR, a French company, a dream turnaround. Employment in the French subsidiary has almost doubled from 85 to 150 and counting. Turnover has skyrocketed from a paltry Rs 9.95 crore in 2010-11 to Rs 163.51 crore in 2011-12.

Managing Director Umesh Choudhary (son of JP Choudhary) says income is expected to double this year. Last year’s profits were modest at Rs 4.43 crore, but up from a loss of Rs. 5.94 crore in 2010-11. Choudhary predicts the French subsidiary will start generating cash for the group within the next financial year. As more orders for high margin products come in, CFO Anil Agarwal predicts profits will increase by 80 percent.

The interesting thing about this turnaround is that Titagarh has used some out-of-the-box thinking to navigate the tricky French industrial business landscape. After winning the auction and acquiring assets, including the 52-hectare plant space, Titagarh Wagons boldly teamed up with someone who had bid against them. Pascal Varin has a wealth of experience dealing with the French rail industry as president of Ermewa, a giant subsidiary of the state-owned French railway service SNCF. Varin bought a 10 percent stake along with Titagarh’s 90. “I think I brought a sophisticated knowledge of the European and African rail freight market,” says Varin, “A knowledge of the local rail freight market was essential for the relaunch of the activity.”

Local knowledge helps
This has proved a wise move; Varin brought with him contacts and local know-how that helped the Kolkata-based company take its first full step into European production and get a foothold in the lucrative EMEA (Europe, Middle East and Africa) region. Together, Varin and Titagarh paid just €2 million for the assets and fronted €13 million in vital working capital. The downturn in Europe was a major factor in getting such high quality production assets at such a low price, says Umesh.

But the big problem, AFR’s high-cost operations, needed to be addressed fast. Fixed costs were bleeding Titagarh Wagons Arbel Fauvet Rail (TWAFR) dry. There were several ways in which the management tackled this problem. The main solution was concentrating work stations and production units into a single area, rather than spreading them around the factory. Not only did this bring costs down, but the proximity helped communication and improved work culture—the lack of which hurt the company in the past. In addition to plugging fixed costs, Titagarh Wagons negotiated for steel directly with Indian suppliers. High-volume deals in India made it possible to provide low-cost steel to Douai and this brought variable costs down.

The next task was to get out of low-value orders. Initially, the management had to take emergency measures to steady the ship. The central theme was to stop accepting orders for low-margin products like petroleum tank wagons—which sell for roughly €7,500 each—and focus on grain, cement and aggregate wagons that go for 50 percent to 70 percent more. “It is one thing to go looking for new orders but it is equally important to learn to say no,” says Umesh.

Then the company wanted to crank up the new order pipeline. That needed the trust of workforce as much as customers. “Our customers, past and present, had to see that we were fully committed to being there for the long haul,” says Umesh. “Earning back their confidence was a major turning point.”

He, along with CFO Anil Agarwal and Deputy General Manager Saket Kandoi, hotfooted it across France to show they meant business. The three travelled between Paris and Douai on the iconic TGV every other day. They found France’s seamless high-speed railway a huge advantage. Hourly trains from the Charles de Gaulle international airport in Paris whisked them to Douai, some 200 km away, in an hour.

“For an Indian company to enter the European rail market was unprecedented. A lot of stakeholders had doubts. We had to use Letters of Comfort [order guarantees from existing customers] to ease the courts’ and labour unions’ apprehensions,” says Kandoi.  France was as new to Titagarh as Titagarh was to France and it took the team from sultry West Bengal a little while to get used to chilly winters and cobblestone streets of Nord-Pas de Calais.
Umesh Choudhary himself had to adjust to a different work culture. “A 35-hour work week? I usually work more than two-and-a-half times that!” he jokes. He found that communicating management decisions to stakeholders in the company was straightforward as long as they are made part of the decision-making process. “The general myth is that people in France are not responsive. This is not true. We were very happy with the response from our employees, local authorities and politicians. The Mayor of Lille was as helpful as the head of the trade union,” says Umesh.

Winning the trust vote
By being communicative and proactively helping stakeholders understand why changes were being implemented, TWAFR was able to build trust and it sparked a virtuous cycle. One by one, Umesh and his team met with private leasing companies and gave execution assurances backed by guarantees from India. Choudhary’s 22 years in the industry were worth a lot as nearly all players in the small rolling stock community knew of Titagarh. Clients like Philippe Millet, a long-time customer, provided the first order and got production moving. He stayed with AFR because of their expertise in design; its lightweight bogey, for example, is a whopping one tonne lighter than competitors’. Less is more. 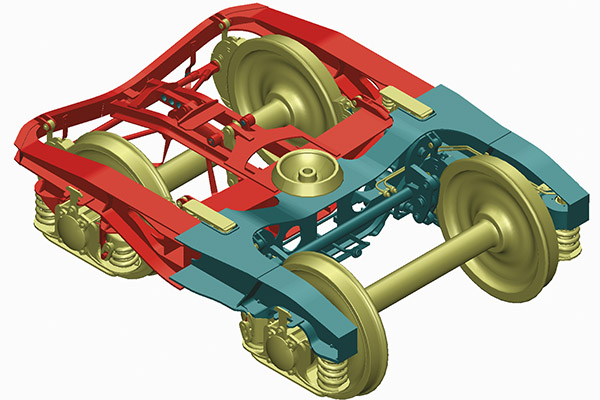 On the left (red) is the heavier industry standard Y-25 bogey and on the right (blue) is the lighter AFR-22 bogey. It means an extra one tonne of material can be loaded

The order which signaled Arbel Fauvet Rail’s comeback was for 400 petroleum wagons in January by SNCF itself. At €7,500 or Rs 5.25 lakh each, they are not very high-margin generators to begin with and SNCF got an even lower quote from an East European competitor. But TWAFR was awarded the contract for being a French manufacturer and for their higher payload capacity—the AFR 22 bogey can hold up to 125 cubic metres, 25 percent more than European competitors. The lightweight bogey made for a heavyweight deal and more followed, culminating in a German client putting in an order for big-ticket cement wagons three months ago. TWAFR is also vying for a contract of 300 grain wagons, where margins are 60 percent higher than those for petroleum tank wagons. “Through more efficient production, we can get a profit of 10-15 percent more per wagon across the board,” says Agarwal.

The French Connection
Though turnover has jumped 1,500 percent in the last one year due to higher value products going out of the factory door, Kandoi explains that high labour costs are keeping margins down to some extent. A normal worker is paid €2,000-€2,200 per month plus social security of almost 50 percent besides many benefits, like one month summer leave. “€4,000 per month is high compared to Eastern Europe where it is €1,500 per month. The market is concentrated there because of low costs,” he says.

Indeed, much of Titagarh’s competition in the European market comes from Czech giants ČKD Tatra and Legios, Greenbrier in Poland and Romanian maker International Railway Systems (IRS). Before the acquisition, ARF languished at the bottom of the Big 5. According to Kandoi, Tatra’s position at the top is insurmountable at the moment, but with the financial troubles IRS is having and the growth AFR is seeing, second place is up for grabs.

Titagarh realises that it cannot compete with Eastern Europe on low price products, so it has shifted its focus on advanced models and leverages its high quality design capabilities.

There is a reason Titagarh took the plunge into France rather than a cheaper Eastern European option: Technical expertise. The French government in the Lille region is making it worthwhile for Titagarh as the region is located close to the English Channel. The €550 million Railenium project will be completed by 2017 and will boast state-of-the-art rail innovation and testing facilities, including a 5 km fatigue-test loop.

Guillaume Delalieux, head of International Trade and Finance Strategy at the prestigious Sciences Po Lille University, says the French perception of Indian business is not great at the moment, with the public’s weariness of FDI reflected recently by industry minister Montebourg’s sharp criticism of Mittal.

“Local politicians and experts, however, know the reality is more nuanced,” he adds, “All things considered, FDI is needed in the region and the Lille region is actively trying to promote rail technology innovation clusters like i-Trans where industry, R&D centres and universities co-operate based on the Silicon Valley model.”

For Umesh Choudhary, the most satisfying thing about the takeover was the learning experience. While bear markets mean results back home haven’t been spectacular, the company can take a lot of heart in the re-establishment of Arbel Fauvet Rail’s reputation as a European player.