The value-led approach is tough but essential 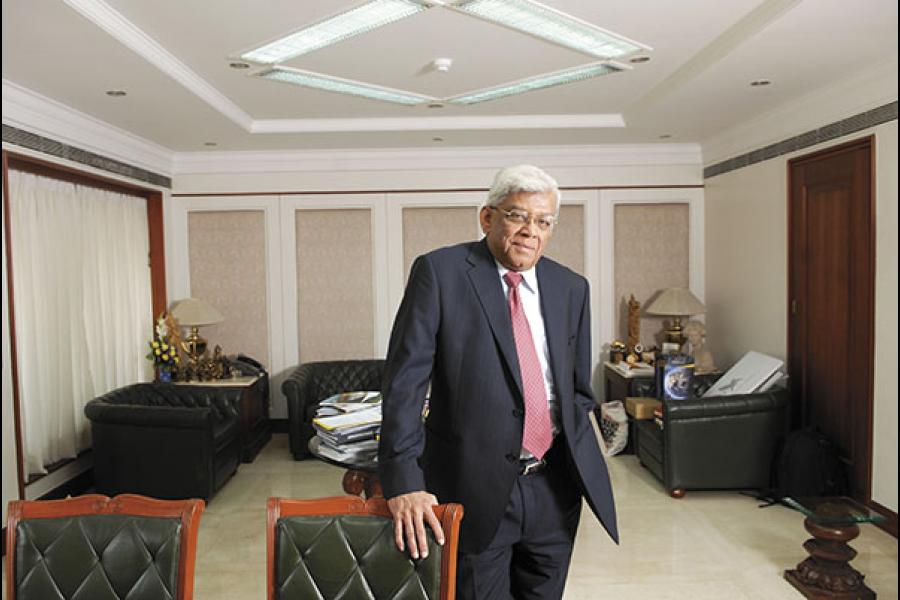 No longer is value-based organisational behaviour an interesting philosophical choice. It is a requisite for survival, say Ken Blanchard and Michael O’Connor in their book Managing by Values. In fact, every industry statesman will affirm that leadership centred around values is inevitable for the building of a legacy.

However, it is no easy task to establish and run businesses along strictly ethical lines, given the uncertain socio-political and economic times we live in. Also, there is no fixed prescription for value-driven leadership.

This column features two of the most respected names in business—Deepak Parekh, the veteran of financial services who steadily and surely raised HDFC Ltd to the foremost levels of banking in India; and NR Narayana Murthy, founder of Infosys and father of the Indian IT sector. Both were pioneers in their respective businesses when they started off more than three decades ago and leave behind legacies that are the stuff of academic case studies.

Q. Your grandfather and father were both bankers. What are the value-driven leadership traits that you have inherited? Have these values stood you in good stead?
I learnt the important trait of humility. One needs to stay approachable and accessible to one’s people. I have imbibed the principle of putting faith in people. To grow professionally and personally, it is critical to trust everyone at least once, as trust is the basic courtesy you can extend towards another human being.

For example, when HDFC ventured into other areas of financial services such as banking and insurance, we selected capable people to run these subsidiaries.

We provided them with the broad guidelines but also gave them a free hand. The non-obstructive approach empowered the managers to independently take decisions, be accountable and also ensure that the brand name of HDFC stays intact. Today, these subsidiaries are doing well and have created value for stakeholders.

Q. What are the core values in building a reputable organisation?
It is essential to build an organisation with the aim of creating a legacy. It is a painstaking effort created over many years. It is not about a single individual or a visionary leader in isolation. The legacy needs to reflect the ethos of the institution and of the people who are able to replicate that ethos in their sphere of work. An organisation needs to be built on the principles of fairness, kindness, efficiency and effectiveness.

For an organisation to grow, one needs to make sure that the employees grow with it. For instance, although HDFC employees do not have the best pay scales, all of them are rewarded with stock options. When the company does well, it reflects in the net worth of the employees.

Q. What are the challenges leaders face in adhering to their values because of the ‘clean business approach’? How would an entrepreneur tackle such a situation?
I am well aware that by taking the clean path, an organisation is often tested in its resolve to stand by its moral fortitude. Good ethics are easy when fortune smiles. But character is tested when pressure mounts and uncertainty prevails. Warren Buffett has aptly said, “When the tide runs out, you can see who is swimming naked.” It is indeed possible to abide by an ethical approach and the rewards do bear fruit in the long run. There are several examples of companies that have demonstrated an impeccable record of prospering without the need to grease palms. Investors today rate companies on ethical practices and governance standards. Hence, the only way to prosper in the long term is to have zero tolerance for corruption.

Q. Could you tell us an anecdote when your core values were severely put to test and how you overcame the situation?
One incident that comes to my mind is the handling of the Satyam crisis, which took place in 2009. Working on Satyam was undisputedly one of the hardest and most daunting challenges, but all the government-appointed directors, including myself, unanimously agreed that this experience was by far the most rewarding. We realised that many Satyam employees had suddenly become the hapless victims of unfortunate circumstances. We were driven by an inner conscience, backed by considerations that were non-monetary. India is considered to be the back office of the world and hence the crisis at Satyam had the potential to dampen the entire IT industry. Motivated by a nation’s cause, we were able to effect awareness about how vigilance, integrity and regulation pay to uphold corporate governance values and ethics in doing business. Moreover, the crux of this experience was that we took quick decisions and solved the crisis within three months.

Q. What are the most important qualities in a business leader? And how can these qualities or values be codified in an organisation?
It is imperative to have moral courage by sticking to your beliefs; a leader needs to pursue a course of action even in the face of overwhelming criticism and great adversity. This kind of courage is always in short supply.

Authenticity is a key trait required in a leader. Other qualities can be picked up based on experience and situations. As a leader, it is unlikely that you will be able to inspire, arouse, excite or motivate people unless you can show what you stand for and reveal that you are willing to learn.

Be fair to colleagues and friends. The ability to judge well is often linked to an ability to mix with, and learn from, other people.

In an organisation, the value system has to percolate down to all the employees. This can only come about by demonstration, which starts at the top.

Therefore, the senior management must make it a point to interact with all employees, thereby constantly reinforcing the organisational culture. How leaders behave will always reflect in how the rest of the employees behave. 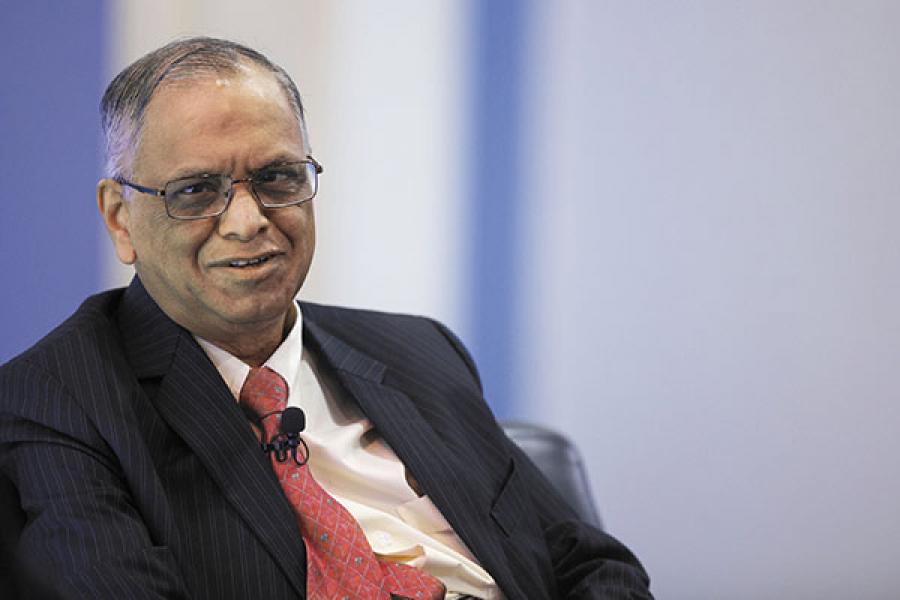 'The softest pillow is a clear conscience’

Q. What is the value system you infused into Infosys, which has powered its sustainable growth?
When we founded Infosys we said we want to be the most-respected company in India; later, when we got listed on the stock exchanges, we said we want to be one of the most respected companies in the world. We also realised that seeking respect from stakeholders is the best way to increase your revenues, your profitability and attract the best employees and the best investors; and we also said being respectable in the eyes of society is very important because society contributes customers, employees, investors, bureaucrats, politicians and vendor partners.

Later, around 1995, we said we want to define our value system as a short acronym so that every one of our employees can remember it easily, can articulate its value easily, and also practice it. So we came up with ‘CLIFE’ (C: Customer focus; L: Leadership by example; I: Integrity and transparency; F: Fairness in everything we do with every other person; and E: Excellence in everything we do). I believe that CLIFE has had a tremendous impact on our employees.

Q. How did you imbibe these values in the company?
We believe that the best way to help our young people accept our value system is by the leaders practising these values and, thereby, leading by example. That’s why I am a follower of Mahatma Gandhi, who said: “You must be the change you want to see in the world.” For example, focus on customer, integrity, transparency, fairness in every transaction with everybody, and excellence in execution; that’s the first step. Second thing we did was to create an acronym that is catchy and that is easy for people to remember and practice. We conducted a workshop with employees and we arrived at these values. These became part of the induction programme that we have for all entrants. We also have the concept of a value champion in the company. We honour the value champion once a year.

Q. Could you share an anecdote when your ethics were being tested but you chose to stand firm?
In February 1984, when we imported our first computer system, the customs officer in Bangalore (now Bengaluru) refused to accept the concession duty certificate given by the Department of Electronics, Government of India. Obviously, he wanted us to pay a bribe. And so, instead of 25 percent duty, he made us pay 150 percent duty, an extra Rs 20-30 lakh. And it took us 10 to 12 years to get it back from the department. From then onwards we had no trouble with customs people because they understood that we will not give them a bribe.

Q. How did these experiences strengthen your resolve to be committed to your values?
I always believed that the softest pillow is a clear conscience and when you have a clear conscience you have a sense of achievement, of confidence, of moral satisfaction. Therefore, everybody becomes that much more enthusiastic and energetic to work harder, to add greater value for our stakeholders. It creates a positive spiral and that is very important for us to be more successful. Therefore, that’s how our resolve was reinforced; because we stuck to our values, more and more customers came, more and more good employees came and more and more good investors came.

Q. For any team that is about to start a business, what are the parameters it should check before closing in on the core team?
I was fortunate that all the people I chose were working with me, and I had assessed them for a year or so. I knew they were decent and honest; they were hard working. I also knew they were ready to make sacrifices in the short- and medium term. So it was somewhat easy for me.

But, when entrepreneurs want to bring people they don’t know, I would say those people will have to hold a detailed discussion and perhaps think of certain situations and then see how each of them would react. Second, if team members fail to live up to their values, they should be asked to leave. Thirdly, the leader of an entrepreneurial team must lead by example.

Gunjan Jain is an author, with her first book She Walks She Leads due for release in April 2016.