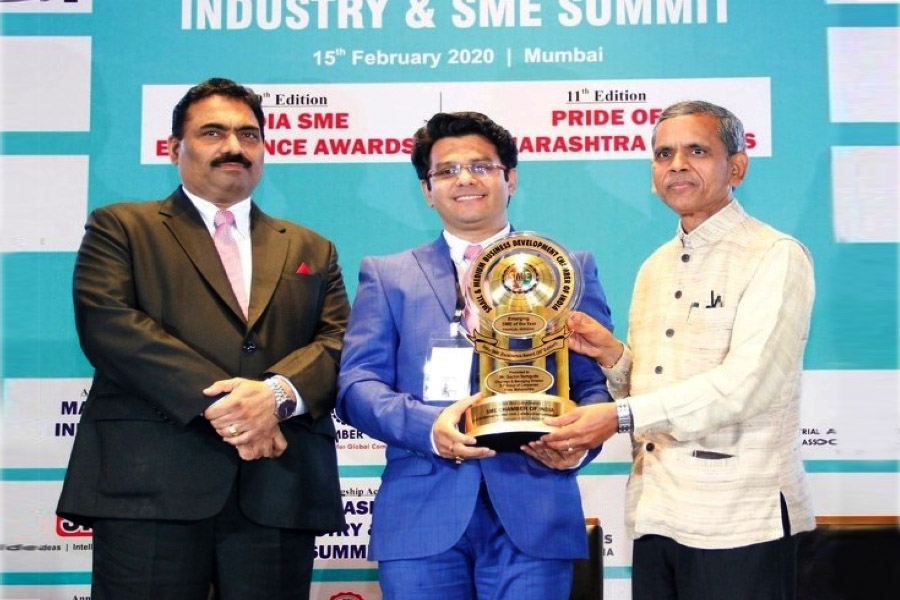 Sachin Bamgude is making the right noise in the Indian market and for all the right reasons. When it comes to financial and loan services, he is the name one can truly rely on. His firm S.P Enterprises, a home loans company was recently awarded ‘Emerging SME of the Year Award’ at the 20th Edition India SME Excellence Awards. R.M Mishra, Special Secretary and Development Commissioner, Ministry of MSME, Government of India presented the India SME Excellence award toSachin Bamgude, chairman and managing director - S P Group of Companies at the Maharashtra Industry and SME Summit organised by Maharashtra Industrial and Economic Development Association and SME Chamber of India on February 15, 2020, at Mumbai’s 5-star hotel, Sahara Star. The awards event saw many entrepreneurs under the same roof who were awarded for their incredible work. Bamgude after bagging the award expressed his joy. “I am really glad that my firm S.P Enterprises has got the much-deserved recognition at the India SME Excellence Awards. Winning an award is a strong push of motivation for S.P Enterprises. It motivates me to work harder and serve people. On my team’s behalf, I want to express my gratitude to everyone who has shown their trust in S.P Enterprises. We will give our best and try meeting the requirements of our clients by providing them with the best loan services”, he said. Not only this, his company has earlier won several awards including LIC HFL All India No.1 since 8 years, Radio City Excellence in Digital Finance Award 2018-2019, HDFC Galaxy of Stars 2019-2020, PMAY Mitra by LIC HFL 2019-2020 and IGMC Super Achiever only in Pan India 2019-2020. Founded in 2008, S.P Enterprises operates in different areas like housing loan, leased rental discounting, commercial finance, venture capital finance, construction finance and loan against property. The company is expanding itself and has built its presence in many cities of India including Mumbai, Pune, Nashik, Nagpur, Delhi-NCR, Hyderabad, Bangalore, Ahmedabad, Surat, Indore, Chennai, Patna, Bhopal, Jaipur, Kolhapur, Pimpri, Thane, Kolkata, Karhad, Navi Mumbai, Satara, Udaipur and Goa. Offering the best referral offer, anyone who refers a loan requirement to Apna Rupee using the mobile app is eligible to win a minimum Rs 2500 to Rs 4 lakh per loan case. Furthermore, with loans, those interested in buying flats via Apna Rupee will be eligible to earn 1% commission through the app. Mr. Bamgude has also begun to start a franchise of his company which has taken S.P Enterprises to a new level. Sachin recently had the opening of S.P Enterprises and Apna Rupee’s head office in Mumbai which was attended by Mugdha Godse and Rahul Dev. He even took producer’s seat as he produced a film titled ‘Love You Zindagi’ which is streaming on Amazon Prime. “My company’s main motto is to create employment opportunities through refer and earn and bring 1,00,000 entrepreneurs together. We are also trying our best to contribute towards Pradhan Mantri Awas Yojana and we will be providing affordable housing loans to the people without any extra cost”, he stated. Disclaimer: The views, suggestions and opinions expressed here are the sole responsibility of the experts. No Forbes India journalist was involved in the writing and production of this article.