The gripping print matrix of Kavita Nayar By Saswati Chaudhuri 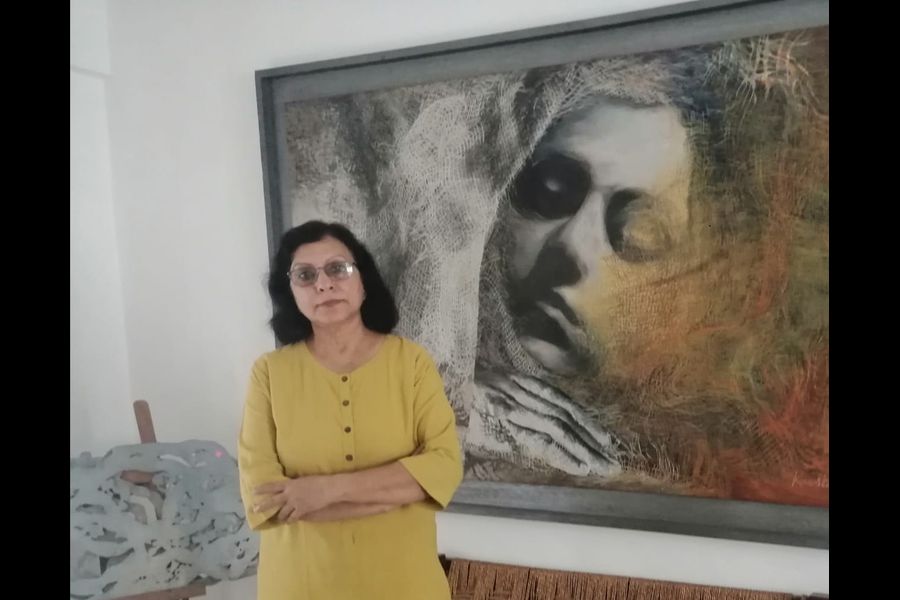 Creativity knocked the door at an early age for Kavita Nayar in the visual form as well as dance form, which she seized with confidence and love. Primarily well known in the field of printmaking, Kavita has been undoubtedly at ease working with all other mediums like oil, acrylic, watercolour and pastel. She is spontaneously innovative moving on discovering herself through her works capturing the emotional realm of experiences to express her thoughts infused with the spirit of nature that combines the technique with her pictorial presentation, as she narrates in words…..

I am one of the leaves! Can you find me! I don’t want anyone to pluck my lotuses!”

“The lotus motif keeps coming back to me; it manifests transcendence – the emergence of the soul from our physical form.”

Kavita was born at Amritsar in 1957 and the same year her family shifted to Calcutta. Attending art classes at the Academy of fine arts, Cathedral Road at the tender age of ten was deeply impactful for her. She received her BFA in Graphic art at Kala Bhavan, Santiniketan pursuing fine art studies from 1974 to 1979 and later did  her MFA in painting from College of Art, New Delhi during 1987-89. Her precious five years of growing up in Santiniketan was a turning point, learning from teachers like Sarbari Roy Choudhury and Somnath Hore, engaging in rich artistic dialogue and watching them working in studios. She did a short term Certificate Course in Kathakali Dance under Guru Kelu Nair that inspired her to create ‘Fury and Pathos’ a fusion, mixing visual media with performing ‘Abhinaya’, exploring ‘Raudra’ and ‘Karun’ Rasas in 2002, expressing her thought on human suffering after Godhra episode. She received a Research Grant from Lalit Kala Akademi and was awarded French Govt. scholarship to work on lithography and etching at Cite International Des Arts & Ecole des Beaux Arts in 1985. In 1990 she worked under a master printer in Serigraphy at Luxembourg with a creative Fund fellowship. In 1996 she went to Ruskin School of Art, Oxford as a senior fellow of Charles Wallace India Trust. In 1989 Kavita was awarded Junior Fellowship and later Senior Fellowship in 1997 from the Ministry of HRD, Govt. of India. She received travel grants from ICCR in 1999, 2005 and 2008 to go to Sweden, Mauritius and USA respectively for workshops and lectures. She presented a paper on printmaking at Otterbein University in US and Gunrapoulos Museum in Athens.

Kavita moved to Delhi for independent art practice in 1979 taking a spirited decision that was worthwhile as she was awarded a National Scholarship by the Ministry of Culture in 1980. Same year her Lithograph was collected by the National Gallery of Modern art and one of her Etching was bought by a private collector. At present her works are in collection with several important Museums, institutions, Ministry of Civil aviation and Panchvati hall in the Prime Minister’s house in India. She has held several solo shows in India and abroad. Her work was part of the prestigious International Triennale of Graphics Prints ‘Vision 2000’ held at Grenchen in Switzerland.

Kavita devoted four decades of her life innovating new methods, never believed to be static and moved on to novel ideas of visual expression in the process of self discovery handling diverse materials. Her concepts are mostly from life experiences which she lived through that are realized in the form of creative fantasies like ‘Aquatic Energy’, ‘Whirlpool’, ‘Mauritian Waters’, ‘Sublime’ and so on. She blends abstract with romantic forms. Her most significant concepts are ‘Sublime’ of 2005, ‘Woven Dreams’ of 2007 and ‘Seeds’ of the time period between 2009 and 2016.

Initially in India printmaking was used for commercial purposes and  record keeping until during the 18th Century several European artists visited India who used printmaking for artistic presentation. Later in the 19th century it was introduced in Visual Art schools for students and by the 20th century it was developed into a fine art technique known as Graphic Art. Since it was not a favoured medium among the connoisseurs in India, lately to bring awareness and to popularize the methods ‘Indian PrintMakers' Guild’ was formed by 12 printmakers for which Kavita held the position of Vice President from 1990 to 2000 and now it is continuing as 'Multiple Encounters' for which Kavita is actively involved as its secretary. To add her expertise in this initiative she has curated many national and international printmaking exhibitions showcasing the prints of Indian and American artists under this banner.

Kavita contributed to academic level for a long period as a visiting faculty of College of Art, Delhi, South Delhi Polytechnic, NIFT, Mahatma Gandhi Institute in Mauritius, Jamia Millia Islamia University and many other institutions. She conducts workshops and takes part as jury member at various organizations across the world. IGNCA, New Delhi produced a documentary film on her as an artist for Doordarshan in 2001. She has been a role model for women who aspire to shape an identity for themselves not compromising on work as well as keeping a balance in the family as wife, mother, daughter in law and a daughter. She believes in working with determination and dedication in mind, heart and soul. Kavita’s artistic sensibility has been enriched by travelling to France, UK and other places around the world. Visiting a number of museums was a vibrant exhilarating experience as she stood in front of all the original works which she studied through books in the library. During her stay in France initially working in a college like ambience and later working as professional artist provided her diverse experience and learning opportunity.

Since her youth Kavita found herself spiritually inclined besides being an artist. She started reading J. Krishnamurthy’s writing at the age of 17 and attended meetings to follow discourses. This enabled her to bear the pain when she lost her 23 years old daughter Sakshi in 2008. She seems to be glowing with enthusiasm when she narrates her work stories connected with her daughter Sakshi, how her ‘Woven Dreams’ oil on canvas series came into being where Sakshi’s image beautifully merged with woven textures amidst fluid forms and the ‘Seeds’ collection were originated. She says, “A seed is buried in a womb and nourished by the mother;  I often think the process of creating each one of my works has been like giving birth.” No one knew Sakshi would leave suddenly but Sakshi’s portrait is distinctly visible in many of her works since 2006. Kavita says it started with a simple sketch while Sakshi was asleep; then serigraphy and collage series ‘Sublime’ was born. Sakshi’s departure was the genesis of ‘Kala Sakshi Memorial Trust’ that was founded in 2009 by Kavita and her husband Pawan Nayar to take forward Sakshi’s passion for art, who was an artist and well-known DD Bharti anchor for the programme ‘Meri Baat’. The trust assists the deserving aspirants recognizing young talents. Kavita found Sakshi’s presence in empowering youth, delivering mentorship and encouraging students to follow their dreams as artists.

Tweets by @forbesindia
Adar Poonawalla's vaccine: No shot in the dark
How Mumbai grappled with the threat of Cyclone Nisarga