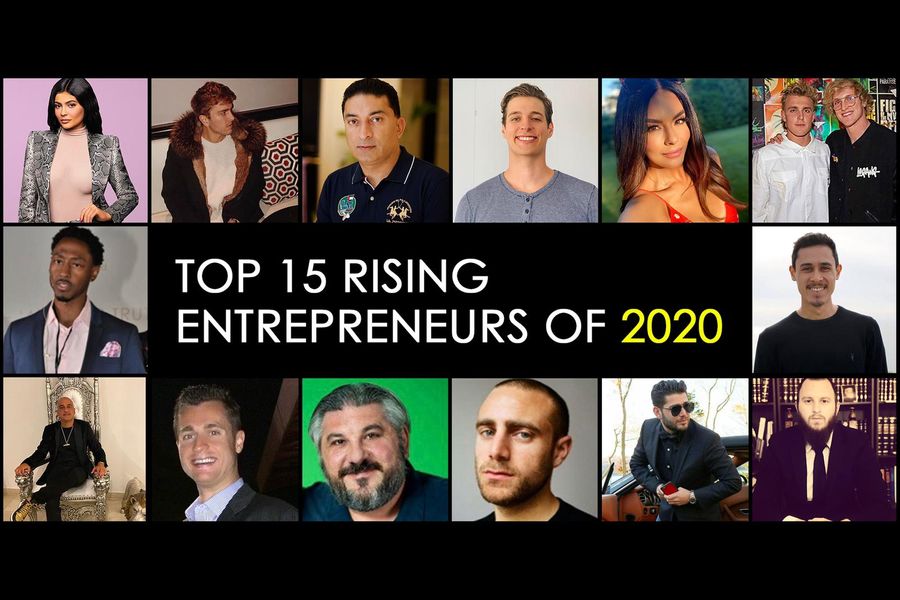 We lay out the names of the biggest and most influential entrepreneurs of the world 2020 that have, in multiple ways, carved their own path towards success.

Though, recently Forbes took away her Billionaire status, with the sale of her cosmetics company she sits as a no brainer to be watching in 2020. We can expect much more from this Superstar in 2020.

The duo has been amongst the top earning YouTubers for several years straight since their breakout onto the big scene with the hit social media platform, Vine. Now, with Jake having launched an entrepreneur platform, and Logan scoring multi-million dollar deals within days, they are still growing their wealth in the limelight.

Moshe Reuven CEO of Wedu, a serial entrepreneur, & up and coming artist with over 1.2M Followers on Instagram. He is holding various executive positions in startups. As he grew, he also found recognition across many of today’s top publications in business & culture. Today’s he is one of the most promising creative minds coming to the fore.

Having raised over $7 Million, Y Combinator Alumni, Joseph Cohen changed the game with the creation of “Universe”. Now, website creation is as simple as a few clicks all thanks to him.

Internationally acclaimed real-time amplification and media strategist who has overseen campaigns for some of the most recognised brands, he has a network that reaches over 3 billion people across all social media networks. Hasan also manages marketing campaigns of a number of world-famous celebrities including Kim Kardashian, J. Lo, Logan and Jake Paul, Justin Bieber, Selena Gomez, Paris Hilton and the Jackson family, generating over $2B in earned media.

One of the rising notable New York-based entrepreneurs is Michael Louis Maddaloni. Owner of elite accessories line & The Luxury Lifestyle Magazine which has garnered 2.5 Million Followers. It is a digital media platform, in addition to, a social-first luxury content creation & publishing outlet which he launched in 2013.

Jonathan Lepow is a visionary and co-founder at Top Tree, one of the top social media marketing firms in the world. It blossomed into one of the elite firms of today by creating high converting social media campaigns which allowed them to scale exponentially.

Mario Molino is a social media entrepreneur with her own online fashion brand called “The Haute Maven Boutique”. Doubling down on her Social Media firm, THM Social has been a catalyst for tons of brands to establish themselves in the fast-paced market of social media.

Tyler Kowalske, Woody Mooers and Tom Beckham founder of "PSY Multimedia" and "Outpost." Visionary marketers whose ideas and concepts help brands and influencers reach success faster. Kowalske is a specialist in the application of non-traditional viral marketing methods that help innovate and bring a new light of hope to the cannabis and hemp industry. Kowalske founded PSY Multimedia in 2017, consulting big brands & influencers, making them more reputable by optimizing and utilizing social media campaigns, product marketing, and growth hacking. He is bringing in new clients for handling the growth of the CBD industry through his company.

Over the past 10 years, Shah Entertainment has been booking the biggest artists throughout the world. Shah Shapourifar started his company as an outgrowth from his passion for music at an early age. Now, he’s known as a sought after music entrepreneur, growing his contact rolodex to become one of the hottest entertainment companies to hit the market.

This entrepreneur is becoming known as one of the top trainers in the US. His out of the box ideas fitness regimes have carved him into a unique as an expert. Williams is a prominent member of Athletic Truth Group (ATG) cashing in on his niche in the marketplace.

Matt Schwarmann is the rising entrepreneur of America. Winning millions in professional poker, got him into many business activities. His first company Rogue Liquids is a vape firm designed to get people to quit smoking combustible cigarettes. He is the Co-founder and COO for Nectris Labs and Outpost Brands. With his poker winnings, he has made real estate investments in Texas, Nevada and Florida. He has built a 30,000 square foot youth center, featuring gymnastics & other activities along with his brother Nick.