Will Electric Vehicles Finally Take Off in India?

All the right things have been said. But not enough has been done 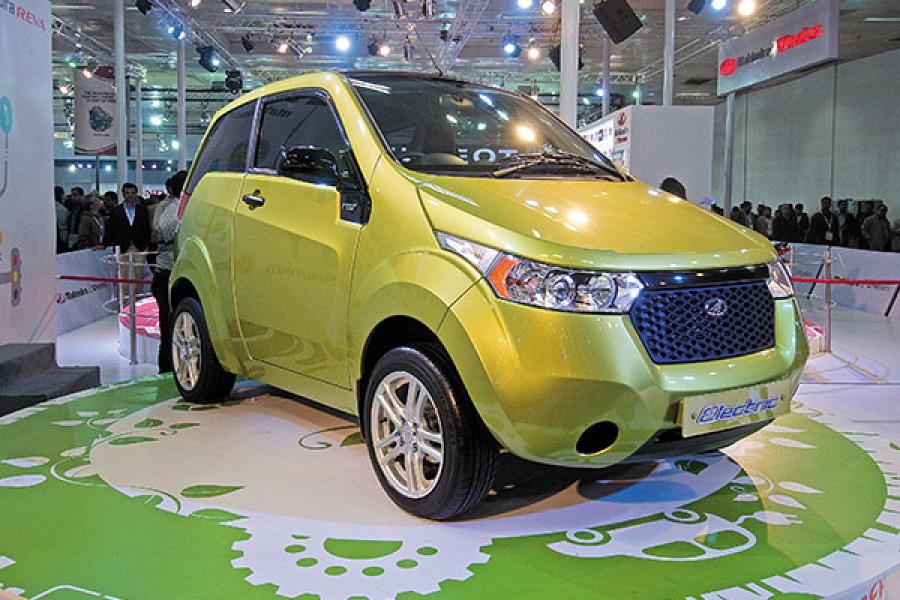 Image: Amit Verma
M&M’s e2o may be a significant improvement over its earlier Reva (in pic). But will it be enough to ramp up sales?

Over the past five years, the clamour about electric vehicles (EVs) becoming a feasible transport option has become loud. “It has all come together”, is the refrain.  “It” means four things: The battery has evolved to a point where it is cheap and reliable; governments recognise the need to move away from oil and are willing to provide incentives for people to buy EVs; consumers want vehicles that are light on their pocket; and carmakers realise that the future lies in going electric and not incremental developments to the internal combustion engine.

So, it should be no surprise that in the past few months electric mobility has occupied some mind space in India. In January, the ministry of heavy industries unveiled its ambitious Draft Action Plan for Electric Mobility 2020, which targets almost six to seven million vehicles on the road by 2020. This is unlikely to happen if the government does not do anything to help the EV ecosystem develop.

The draft focuses on the vehicle. It promises incentives to customers, vehicle manufacturers and research and development organisations. This draft was followed quickly by an announcement from Mahindra Reva that its second-generation electric car e2o is ready to be rolled out of its spanking new 35,000-capacity-per-year plant in Bangalore. “The technology is much more ready today. And government policy is changing. For the first time, all of this is coming together,” said Chetan Maini, chief strategy officer, Mahindra Reva.

Maini is not alone in his thinking. Carlos Ghosn, CEO of Renault-Nissan and the biggest advocate of EVs, has repeatedly said such vehicles will change the face of mobility. The company has invested almost $5 billion in its EV programme and the Nissan Leaf was launched with much fanfare in 2011. It is also widely believed that Chevrolet Volt, another EV, is the best thing to have happened at General Motors in the past decade.

Maini says one should look at the brighter side. For instance, Nissan sold more EVs in Norway than in the US. Although the country’s population is almost a sixth of the US, 5.2 percent of all cars sold (about 10,000 units) in Norway in 2012 were EVs. Why? The Norwegian government provided support such as zero import duty on EVs, assistance for charging infrastructure and permission for EVs to use the bus lane during rush traffic.
So, how is it going to work out in India? What is the government doing to make EVs a reality?

Ambuj Sharma, joint secretary at the ministry of heavy industries, has been involved in the EV vision 2020 document for the past two years, coordinating with almost 10 ministries and 30 vehicle manufacturers. He believes EVs are far too big a technology leap in the automotive business for the Indian government to not have a stake in it. Plus, he is worried about rising oil imports and increasing urban pollution. “We are importing nearly $180 billion worth of crude oil. This is going to increase every year depending on our GDP and number of cars,” he says.

If the idea is to reduce the fuel import bill, then EVs aren’t going to help much. They are at least 50 percent more expensive and most of that is because of the battery. India doesn’t make these batteries and they will have to be imported. So, instead of paying for oil, dollars will be shelled out for batteries.

“I don’t see battery prices coming down enough for an Indian consumer to be able to afford an EV. The second thing is that EVs will consume electricity. India gets 60 percent of its electricity from coal. And coal is definitely not a CO2 friendly energy,” he says.

Perhaps the answer lies in downsizing the internal combustion engine? Instead of six cylinders, there could be four, and then three, and then two cylinders. “And then put a turbocharger. We will have a much larger impact on our current account deficit and the import of oil,” says Aulbur. He has some believers among carmakers. Sources say that throughout the debate on the vision 2020 document, India’s largest carmaker Maruti Suzuki held its ground that downsizing engines and CNG are the way forward. Tata Motors believes India is not ready for EVs.

Sharma disagrees and points to the natural gas situation. Initially, CNG was touted as the solution to pollution, and much of it was to come from domestic wells/natural resources. In the past 10 years, the capacity to produce natural gas has not matched the demand for it. Natural gas is also needed for pharmaceutical and chemical industries. This is why the government has not allocated enough gas for transportation. “This situation is likely to continue for the next five to 10 years. So, if you have to import LNG, then you are back to square one,” says Sharma.

Perhaps India can leapfrog to EVs, the way it leapfrogged wireline and went straight into mobile telephony. China certainly thinks so. China has been investing heavily in EVs and battery technology. China’s entire two-wheeler industry, which adds more than 15 million units a year, is battery-powered. Late last year, China’s Waxiang Group bought A123, one of the largest EV battery makers in the US. Can India catch up with China? Aulbur doesn’t think so. “China controls 93 percent of rare earth metals and has both people who can pay for batteries in large numbers and the money to really support a largescale EV programme. Will we get that scale in India? I doubt it,” he adds.

In this context, can Mahindra & Mahindra succeed with it e2o? It is a significant improvement over its previous generation Reva: It can seat four people, can run at least 120 km on a single charge, and the lithium-ion battery recharges in just five hours. But it suffers from two drawbacks: It will have a steep upfront cost, between Rs 5 lakh and Rs 7 lakh, and there is no public charging infrastructure that can make it a mass market vehicle. A government subsidy would have been a good place to start, but Budget 2013 does not have any sops for EVs.

Maini still believes that almost 90 percent of the e2o customers would charge at home, so public infrastructure is not a problem. But then, he would say that.

The most important reason why consumers are reluctant to buy EVs is not the lack of charging infrastructure, but their high price. Hero Electric and Electrotherm, from two of India’s largest electric scootermakers, have not done well: EV scooters formed less than 1 percent of the 13 million two-wheelers sold in India in 2011.

Hybrid vehicles? Nobody makes them right now. The ridiculously expensive, imported Toyota Prius does not count.

So, while the clamour can and should, continue, the government will have to do much more to make EVs a reality.