Reforms and fiscal consolidation will be the focus of the Budget. And with several states going to polls this year ahead of the 2024 general elections, economists expect big-bang announcements to woo voters 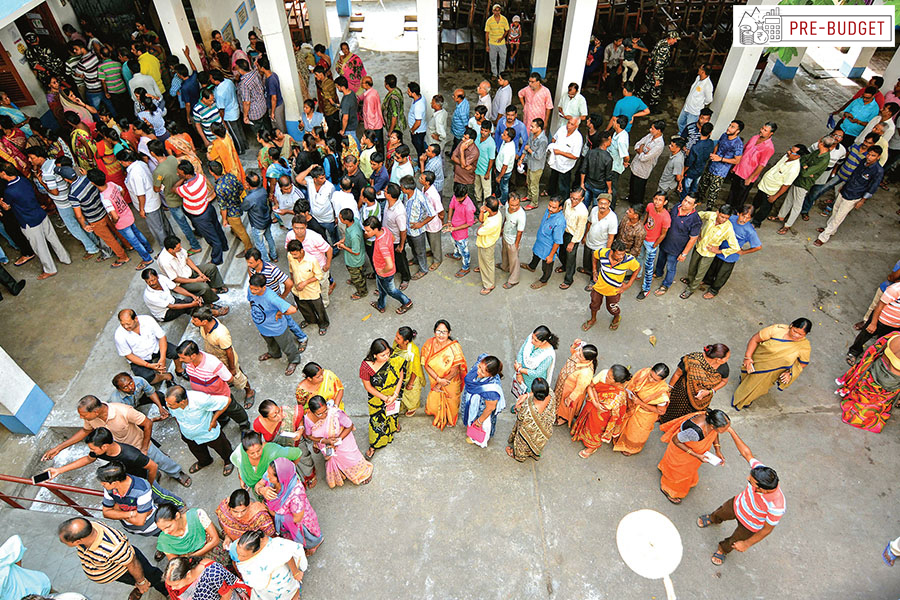 Several important state elections in 2023 will set the stage for the 2024 general elections, and this is likely to be reflected in the Budget Image: Dibyangshu Sarkar / AFP

It will be a tight ropewalk for the government to balance populist measures and rein in reforms to boost investments as this is the last full-year Union Budget before India goes to polls in 2024. However, the government will have to prioritise growth and fiscal consolidation, according to experts.

“We expect the Union Budget to be a balancing act between fiscal consolidation, reforms and high focus on revenue and capex expenditure,” says Trideep Bhattacharya, CIO-equities, Edelweiss MF.

He believes higher government infrastructure spend, indigenisation of defence, rural spend and production-linked incentive (PLI) beneficiaries may see additional growth measures in the Budget. “We surmise that stock markets would appreciate a general focus towards fiscal consolidation over medium term. In the short term, minimum/nil tinkering of tax rates would be positive from a stock market point of view and keep investor sentiment positive towards Indian equities,” adds Bhattacharya.

The key factors experts are keeping an eye on in the Budget are fiscal consolidation, reforms and growth. They are hoping for rationalisation of bottlenecks for growth like subsidies, clear roadmap for disinvestment targets and expediting PSU consolidation/privatisation. Measures to boost growth in rural economy, deepening of PLI schemes towards multiple sectors and keeping the momentum of capital expenditure going forward are some announcements analysts will watch out for in the Union Budget presented by Finance Minister Nirmala Sitharaman.

“State elections, particularly in Gujarat, where the incumbent BJP has won a record majority, will aid in policy continuity and preclude the need for any populist measures in the Budget ahead of the 2024 elections,” says Gautam Duggad, head of research, institutional equities, Motilal Oswal Financial Services.

In December, when the poll results were announced, the BJP won Gujarat for the seventh consecutive time with an overwhelming majority of over 85 percent seats. Gujarat contributes 26 seats to the Lok Sabha. Himachal Pradesh, on the other hand, continued with its tradition of rotating the government, with Congress winning 40 out of 68 seats. Indian markets traded at new highs with higher outperformance in 2022. And 2023 promises to have a busy political calendar with several important state elections, including Karnataka, Madhya Pradesh, Rajasthan and Chhattisgarh. These will set the stage for the 2024 general elections.

“On the one hand, there are a plethora of pandemic-era schemes that have overshot expenditure targets this year, which will most likely be discontinued in FY24, like excess spending on subsidies. However, FY24 also offers a mix of a busy political cycle and downside risks on growth, which would complicate fiscal consolidation,” says Aurodeep Nandi, India economist and vice president, Nomura.

Nandi expects nominal GDP growth to likely be 10.4 percent in FY23 from around 16 percent this year owing to the spillover impact of tougher economic climate globally and lower inflationary pressures. Not only does this inflate the fiscal deficit to GDP ratio, but it also means that it will be more difficult to sustain the stellar tax collections observed this year.

Sushant Bhansali, CEO, Ambit Asset Management, feels that over the last several years, the government has adopted  an approach of under-promise and over-deliver. “Budget estimates on both revenue and expenditure side are usually quite moderate and as the year progresses, tend to be revised upwards. We believe this is a sensible approach which strengthens government credibility. The Budget may witness more emphasis on rural economy and agriculture as usual, but is unlikely, in our view, to be overtly populist,” he says.

Bhansali will closely watch out for the fiscal deficit target for FY24, the budgeted capital expenditure, MNREGA allocations and infra spends. “These will be critical for not just the macro economy but shall also be closely watched by equity markets,” he says.

Analysts say the stock markets (other than fiscal deficit, revenue and expenditure estimates, and disinvestment targets) will be looking for two key things: Extension of the PLI scheme to the MSME sector as this would enable the manufacturing footprint to expand aggressively, and increasing the tax rebate benefit for consumption expenditure to create a ripple effect on the economy.

“I would be surprised if there is any big-bang spending announcement. Consistency, along with a clear trajectory to achieve 4.5 percent fiscal deficit by FY26, would be our expectations,” says Chandraprakash Padiyar, senior fund manager, Tata Mutual Fund.

Padiyar feels railways, roads and defence may be the three areas of focus, out of which railways may be the largest capex beneficiary over the next few years. “Potentially, food subsidy bill may reduce for FY24, which can provide the government additional room to spend on infrastructure development,” he adds.

Rajani Sinha, chief economist, Care Ratings, says, “The private sector capex cycle has not yet picked up in a big way, hence the government will continue with its focus on capex-led growth. The Centre’s capex push will be led by the transportation sector, including roads and railways.”

Sinha adds that with external demand weakening, it will be even more critical for the government to announce measures to boost domestic demand. In that context, any form of tax cut or exemptions to boost household spending will aid economic recovery.

As consumption spending specifically by the lower income category remains relatively weaker, there could be targeted income tax measures to support this income category. “We could also expect some measures targeted at supporting the export sector, given the expected global slowdown,” says Sinha.