MapMyIndia knows how to navigate storms and the stock markets

After coming close to selling the company and battling the odds for over two decades, the Vermas got MapMyIndia listed in 2021. Now, their venture is navigating the stock market storm better than its peers 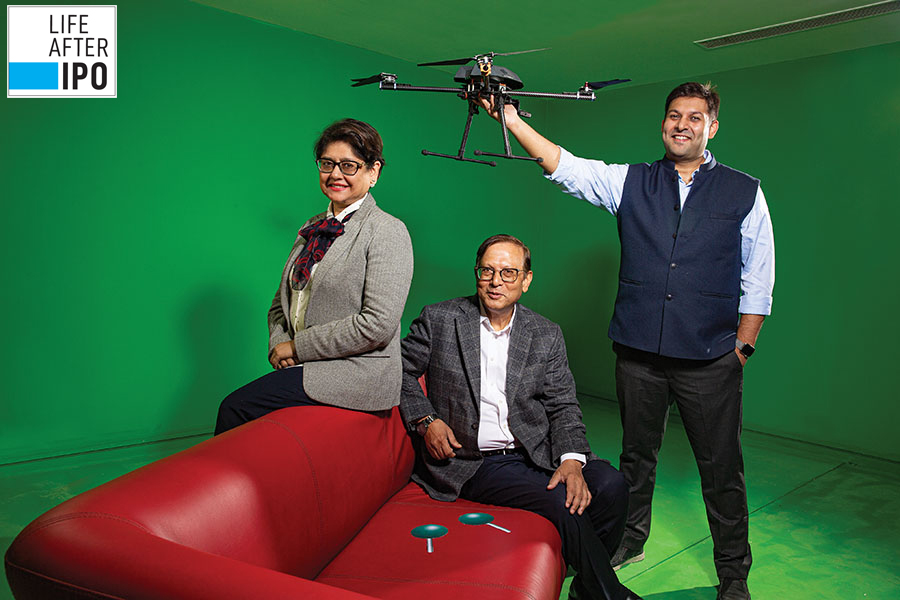 2018, New Delhi. There was an insane amount of money on the table. And for Rakesh Verma, there was every reason to yield to the temptation this time. CE Info Systems—the parent company of MapmyIndia—was co-founded by Verma and wife Rashmi from a three-bedroom apartment in New Delhi in 1995. Over the next two decades, the duo painstakingly built and profitably scaled their digital maps and location tech venture against all odds.

The biggest obstacle, in fact, was the beginning. The techies spent over a decade in the US, worked with companies such as General Motors and IBM, and came back to India in 1990. “Are you crazy to start your own venture?” was the reaction of friends, family and well-wishers. “You guys must be nuts to even think of digital maps,” was the common disbelief when the venture morphed into digital maps and location tech service and products in the late 90s. “We must have heard both the words—crazy and nuts—hundreds of time,” recalls Varma.

Back in 2018, both words came back to haunt them. There was an acquisition offer from PhonePe. Though this was not the first time Verma was entering into a sell-out discussion—Yahoo tried its luck in 2006, Japanese map publisher Zenrin expressed its intent in 2012, ecommerce major Flipkart had a strong chance in 2015—PhonePe’s bid boldly stood out. “Are you crazy?” remarked one of Verma’s close friends who got to know about the amount on offer. “Just go ahead and accept it,” was the advice. “You guys would be nuts if you refuse,” quipped one more confidant. “Who says no to so much of money?”

It was not only money, though, which made Verma think hard. The first-generation entrepreneur was feeling exhausted. “I seriously thought this was the best time to exit,” reckons Verma, explaining his mindset. After a gruelling two decades of journey—not to forget how the Indian upstart had been valiantly fighting against Google—MapmyIndia was over a ₹100-crore company by 2018. The icing on the cake, though, was an envious bottom line. The company had always been profitable, and turned cash-flow positive since 2015. It had stayed bootstrapped till 2005, and over the next 10 years, didn’t raise more than ₹150 crore. “You build a business for so long, but you can only take it to a certain level,” says Verma, explaining the grim reality. He decided that PhonePe would be the best home for his venture.

It was D-Day. Verma, along with son Rohan, went for a final meeting with PhonePe Co-founder and CEO Sameer Nigam, and signed the deal. “There was a conflicting look on his face,” recalls Nigam. Verma’s son, though, had different plans. Rohan, underlines Nigam—who was meeting the son for the first time—had a grand vision for the company and wanted it to run for the next several decades. Impressed with the lad’s ambitious plans, Nigam retracted the offer. “This was not the right thing to do. I tore down the offer,” he recalls.

Three years later, in February 2021, Nigam was about to do another thing. “And it was the right thing to do,” he reckons. The government liberalised guidelines for geo-spatial data, and Nigam knew it could be a game changer for MapmyIndia as the new norms would open floodgates in terms of business opportunity. There was one catch, though. To make most of the new rules, the Indian promoters needed to have over 50 percent ownership. Vermas didn’t make the cut, and PhonePe had 35 percent stake in MapmyIndia, which it bought from Flipkart by paying a premium in 2020.

Nigam made an offer to the Vermas. And this time he wanted a promise. Take the company to the IPO, he told them, and PhonePe will sell back some stake to help meet the 50-percent criteria. The Vermas agreed, the board of PhonePe also relented, and CE Info Systems got listed on December 21, 2021. “It was one of the best IPOs of 2021,” he says. 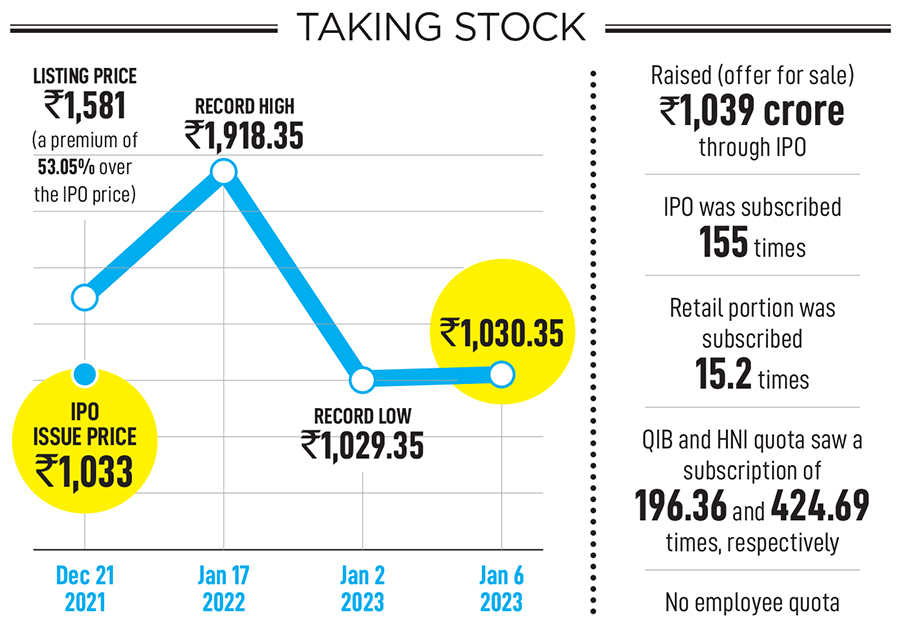 While the IPO was subscribed 155 times, retail portion, QIB (qualified institutional buyers) and HNI (high net-worth individual) quotas were subscribed 15.2, 196.36 and 424.69 times, respectively. The shares got listed at ₹1,581, which was a premium of 53.05 percent over the issue price of ₹1,033. “The real happiness lay in the fact that the market made us a unicorn,” says Verma.

There was more happiness in store. A month after listing, on January 17, 2022, the stock hit a record high of ₹1,918. This time Verma felt a different kind of emotion. “Samajh nahin aaya. Market kya karta hai, bhagwan jaane (I couldn’t understand the swing. God only knows how the markets behave),” he says. His son was fascinated. “When you just get listed, you are tempted to look at the price,” says Rohan, who was advised by many to keep his eyes away from the stock movement. “You feel good when it goes up, and you feel bad when it goes down,” he says.

A year later, on January 2, 2023, the stock hit a new low at ₹1,029.35. Rohan, who happens to be the chief executive officer, knows the scrip doesn’t reflect the reality. “We are just a little-over-a-year-old company,” he says, underlining that the fundamentals of the business are strong. For 25 years, he claims, MapmyIndia has outcompeted Google. “One day, the market will look at us from this lens,” he says. In spite of being a seasoned entrepreneur, Verma got perturbed for a while. During one of his conversations with a banker, who played a part in the IPO process, he expressed his anguish. The banker smiled. “Look at the context Mr Verma,” he said. “There is a carnage in the market,” he underlined. “And you have performed brilliantly so far,” he reckoned.


Also read: CarTrade is zero-debt, has cash reserves and is profitable. Why is it's stock getting battered?


Meanwhile, Nigam is confident about the prospects of MapmyIndia. “I don’t think people have understood the value that this company can unlock,” he says, pointing out the profitable track record, steadily increasing operating revenue and zero debt on the balance sheet. Commenting about the turmoil in the stock market, he reckons that the correction is part of the market cycle. In a lot of the big-name IPOs that happened last year, he says, people were riding the premium that the market valuations offered. “There was a crazy amount of FII (foreign institutional investor) money that was floating around,” he says, adding that many rode the market upside and had nothing to do with the business potential. “There is a correction, and some of the startups got hit disproportionately,” he says.

There is silver lining, though. “There are IPOs that have actually outperformed the global index,” says Nigam. 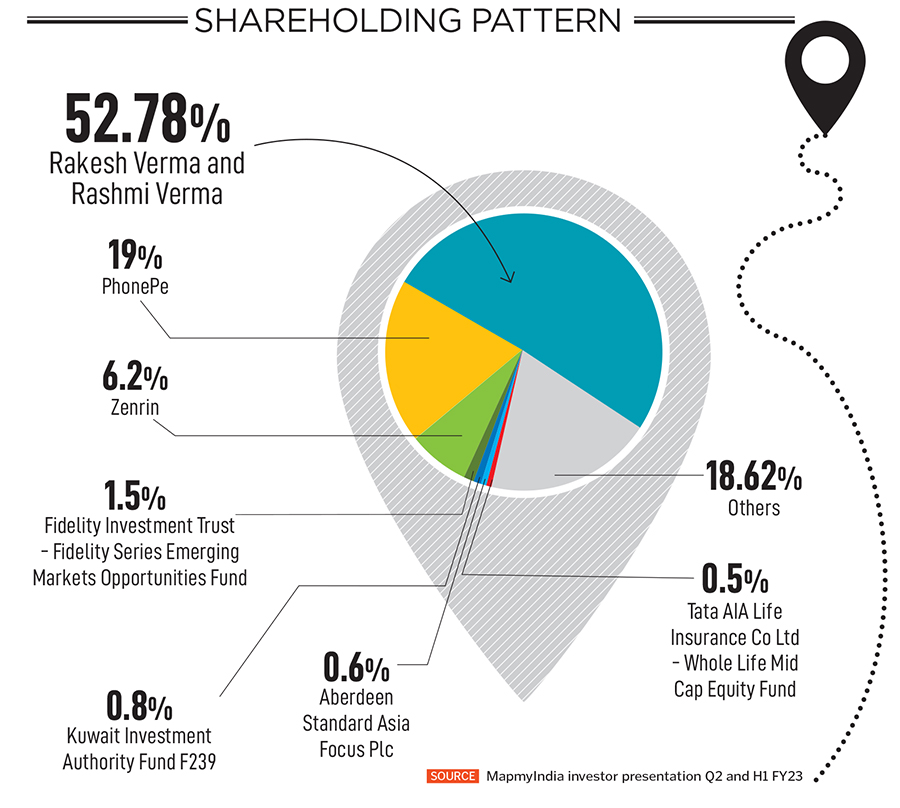 Decoding the behaviour of the Indian retail investor, Nigam reckons that people in the country are used to more financially-sound companies with a long track of profitability. VC (venture capital)-backed startups, on the other hand, rarely meet that requirement because they keep investing into the new lines of businesses. Over the last year or so, it has been a two-way learning for both markets and listed startups. One thing, though, which new-age companies have understood, is that for the markets, profit is a real thing. “It’s not a mythical object. It can’t always be someday in the future,” he says.

Vermas, for their part, reckon that they are mapping the future in a sustainable manner. “It’s a marathon, and we are creating a long-term value,” says Rohan. Any disconnect between the price and the performance or the potential of the company will take care in the long term if the company keeps performing quarter after quarter. “We still have the conviction, and we are on the right track,” he adds..