With listing at 75 percent premium and a record high the day after, Indigo Paints made a stunning debut in 2021. Two years later, the stock has plunged below the issue price. Can Hemant Jalan continue to paint the town red? 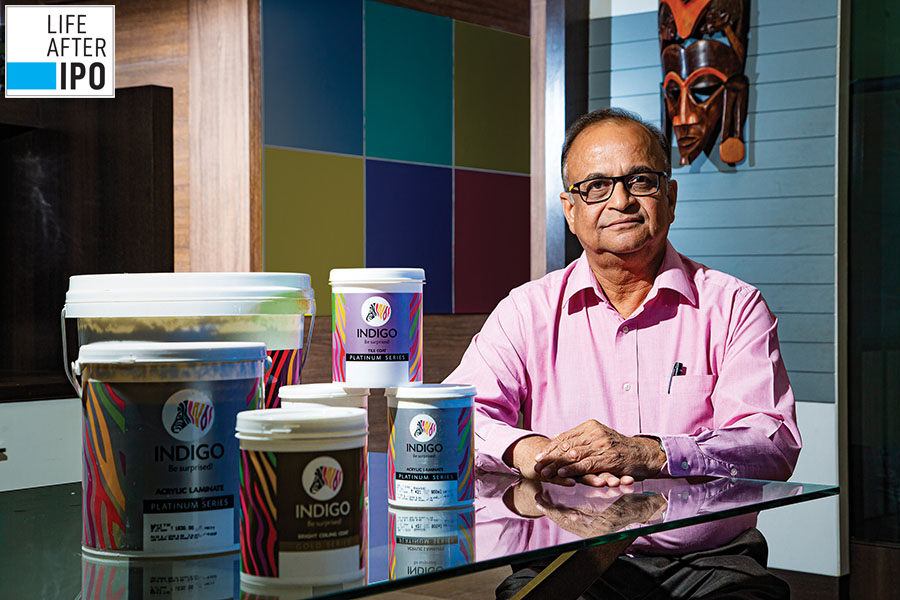 The ball was hit out of the park. And the speed at which the ball, or call it the news, travelled, looked like it would paint the town red.

“It was a little over the top,” confesses Hemant Jalan, who was startled with the way the debut stock of Indigo Paints zoomed. “Actually, it was beyond expectations,” reckons the chairman and managing director. Started by Jalan from a rented factory in Rajasthan in 2001, Indigo Paints was making its public market premiere after two decades, with an issue price of ₹1,490.

The stock made a staggering entry. “It got listed at ₹2,607.5, a premium of 75 percent,” says Jalan, an IIT Kanpur graduate who ran his venture of chemical manufacturing for a decade till 1995. “By end of the day, the stock was at 100 percent,” recalls Jalan, who came close to bankruptcy in 1995, quit his business, joined Sterlite Industries, and in 2001 was again back to doing what he professes was “always in his blood”—entrepreneurship.

Back in Mumbai, at Taj Lands End, the blockbuster listing and the entrepreneur were the talk of the town.

Jalan had hosted a party in the evening to express his gratitude towards well-wishers, stakeholders and friends. Uday Kotak was the first one to take the stage and turn the limelight on the founder of the freshly listed entity. “Hemant has scored a triple century,” was how India’s first billionaire banker started his speech.

The cricketing analogy was apt. Indigo Paints had been listed at a PE ratio of more than 100, the issue was subscribed more than 100 times, and the stock got a premium of more than 100 percent. “So it’s a triple century,” said Kotak. “That was a great comment to come from a person like Uday Kotak,” recalls Jalan, who was overwhelmed and humbled by the way things had panned out in his journey.

The listing frenzy and delight, though, looked like a trailer. There was more in store the next day. On February 3, 2021, the stock pole-vaulted to ₹3,348, which was much more than double the issue price. Clearly, the fifth-largest paints manufacturer in India was having a wild and fairy-tale public market debut. Jalan, though, had not broken into exaggerated celebrations.

Also read: CarTrade is zero-debt, has cash reserves and is profitable. Why is it's stock getting battered?

Cut to December 23, 2022. The stock crashed to ₹1,240, a record low for Indigo Paints, which stayed bootstrapped till 2014, got funding from Sequoia the next year, and roped in cricketer MS Dhoni as the face of the brand in 2018.

The reason behind the battering of the stock—apart from the overall market correction and meltdown across global markets—could not have anything to do with the performance of the company. 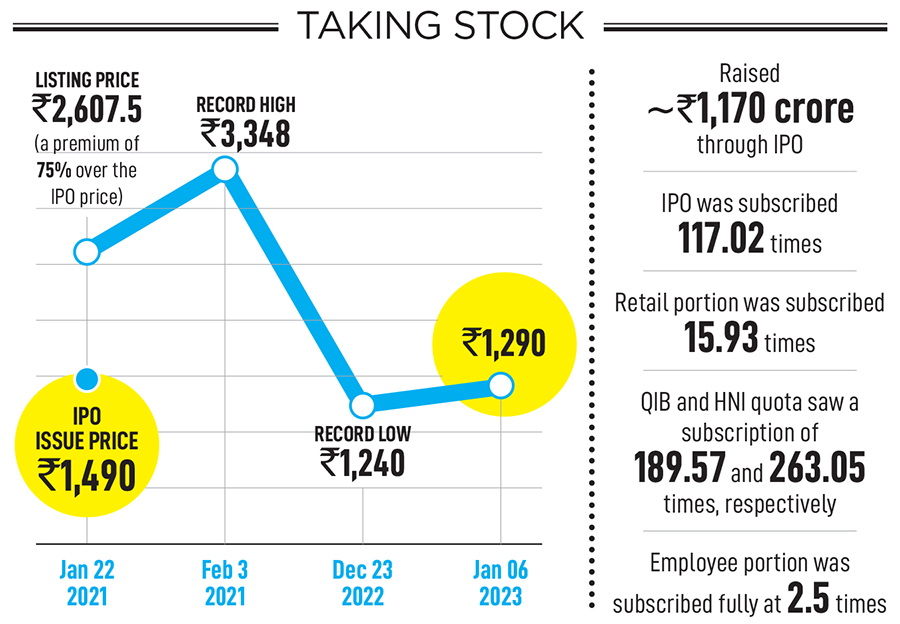 In fact, in H1 of FY23, PAT jumped 126.59 percent y-o-y. Clearly, the drubbing of the stock had nothing to do with the report card. “The issue was not that we were under-performing or poorly performing,” underlines Jalan. The company, he maintains, had been scoring consistently before and after the IPO.

Then what went wrong? What made the stock tumble? Jalan has an answer, which borders on ‘performance’ or ‘performance expectations’. He explains. In the eight-to-10-year run-up to the IPO, Indigo’s growth rate of the top line had been around 2x of the industry growth rate. “Now, our IPO happened in the midst of Covid,” Jalan says, continuing with his rational explanation. While there were severe supply chain disruptions, raw material prices for the paints industry shot by 80 to 100 percent.

The pandemic turned out to be a turbulent time for all, including the paints industry. Whenever lockdowns were declared in phases and patches, paint shops got shuttered, hitting retail sales, and trucks got stranded across the country. So, for over a year leading to the IPO, Indigo’s growth got subdued. Though it was still in line with the sector, it was no longer 2x the industry growth rate that Indigo had been posting. “I think this would have disappointed the market. They were expecting much more from us,” says Jalan, underlining the expectation pressure from the industry outperformer.

But did the founder expect such a steep fall in share price? Jalan is candid with his self-assessment. “I never viewed things as having fallen from the peak,” he says, alluding to the crash from either the listing price of ₹2,607.5 or an all-time high of ₹3,348. “I should be held responsible for the price at which we issued our shares,” he says. The peak, Jalan stresses, happened the day after the listing. “Now, that is not within my control. I don’t know why there was an investor frenzy,” he says. “I am not responsible for that,” he adds. Till November last year, the stock was trading well above the issue price. “So it didn’t bother me much,” he says, adding that at present the stock is below the issue price. “But all paint stocks have been hammered badly,” he adds.

There might be another reason for paint stocks getting hammered. Jalan explains.

In 2021, Grasim Industries announced its plans to enter the paint sector with a reported investment of ₹5,000 crore. In May 2022, there were reports that the Aditya Birla Group-owned entity is planning to double its investment to ₹10,000 crore. “This might have hit all the paint stocks,” he says. The perception that Grasim’s entry is going to shake up and destroy the profitability of the paint sector is unfounded though, believes Jalan. “But what can we do about it,” he says. Though Grasim is still a year away from entering the field, they won’t have a cakewalk. “They will realise the barriers and the toughness of the industry to make very sharp inroads,” he says.

But does the wild market swings bother the founder? Jalan uses the example of his brand ambassador Ms Dhoni to answer this. “Don’t look at the result of the match, that’s not in your hands,” says Jalan, quoting Captain Cool. In post-match interactions and interviews, Dhoni talked about what a player should do, and what one must not do. “Just focus on the ball and play it to the best of your ability. Sometimes you win, and sometimes you lose. That’s the game,” he says.

“And if you have given your 100 percent, then you shouldn’t feel bad if you lose, and you shouldn’t feel exhilarated if you win. The idea is to give your 100 percent. And that’s really the philosophy that I subscribe to. That’s all that a human being can do. And you do that, and I’m sure that sooner or later the results will come; and when the results will come and consistently come by as far as company performance is concerned, stock markets will take care of themselves. They’re logical ultimately.” 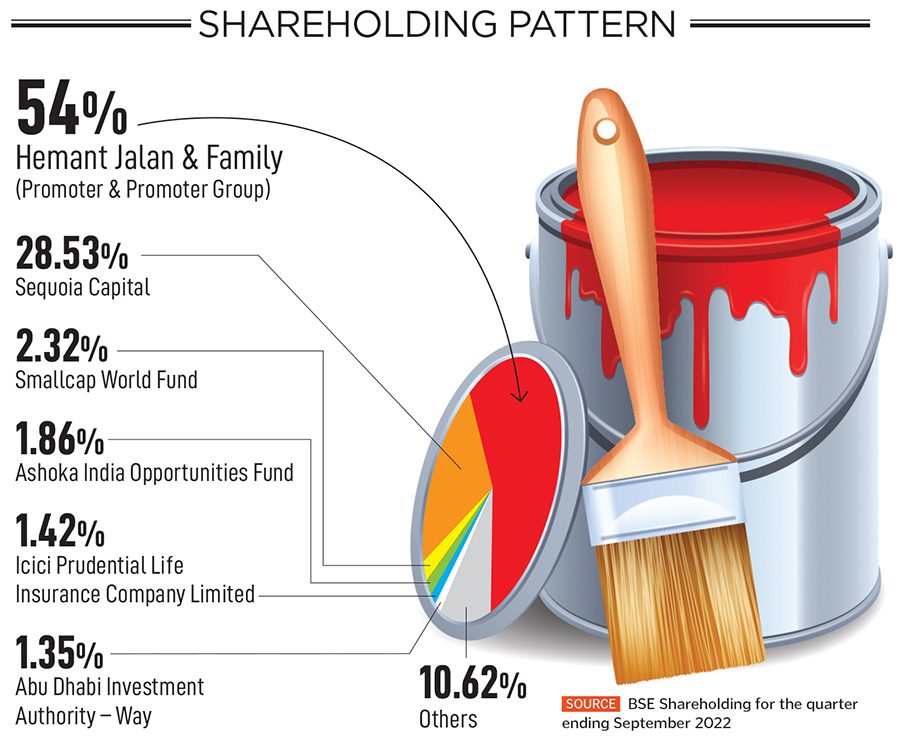 The lessons are priceless in the entrepreneurial world as well. “I don’t worry too much about the share price. It’s not within my control,” contends Jalan. He is, however, aware of the mind games that a falling stock plays. Take, for instance, the employees who have Esops, and keenly track the share price. “Though they don’t talk about it to me, I know they might be slightly disappointed,” he says. Jalan, though, is quick to add that his staff are mature enough to understand the value of long-term, and are getting used to the vagaries of the stock market.

Has Jalan got used to a public life, and public scrutiny of his company’s performance? Has his life changed after the listing? He reckons it has in multiple ways. First, the chairman and managing director now has to spare a chunk of his time in building investor relationships. Second, his free time in the evenings get exhausted by networking, business calls and everything even remotely connected with work. There is no time to relax. Third, Jalan has become a little more self-conscious. “One has to be infinitely more conscious about what information one is sharing,” he says. And finally, he is getting used to a life that is guided by quarters. Previously, he explains, the pressure was only on long-term things, and you could ignore short-term profitability and growth parameters and focus on the long term. “Now, along with the long term, short term is also equally important,” he smiles, adding a line of advice for IPO aspirants. “You must have a sound reason to go for an IPO,” he says. And if you’re a fundamentally sound company, there will always be an appetite for the stock. “Don’t worry about the wild swings, highs and lows. Just keep batting,” he says.

Tweets by @forbesindia
Handwriting still has a place in our connected world, now it's a trend on social media
MakerDAO's community strongly in favour of keeping GUSD as a part of Maker's reserve