In December, one of Golconda’s best diamonds will go under the hammer at Sotheby’s. Here’s a look at the best to have sparkled 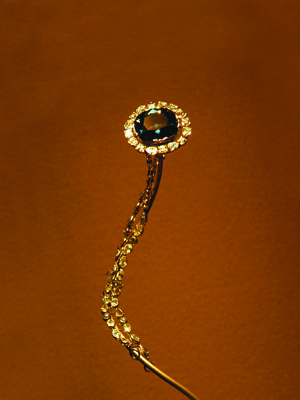 1. The Light of Golconda, the size of a quail’s egg, dates back to the 17th or 18th century. It is an exception because of its size (33.3 carats), purity and the fact that it was hand cut. It is expected to fetch about $7 million, discounting the buyer’s premium. For that amount, you could buy a handful of supercars, or a decent flat in Mumbai.

3. The Hope diamond, worth about $250 million, is believed to be from the Guntur mines of Andhra Pradesh. It is said to carry a curse, bringing ill fate to whoever owns it, because it was stolen from the forehead of an idol in India. It’s now in the Smithsonian Natural History Museum in Washington D.C.

4. The De Beers Centenary diamond is another eye-popping product of the Premier Mines. Estimated to be worth around $100 million, it was cut by a hand-picked team, assisted by engineers, electricians and security guards.

5. And then, of course, is the Koh-i-Noor. Once known to be the largest diamond in the world, it is also from Guntur. Kings through centuries have fought bitterly to own it. It originally belonged to the Kakatiya kingdom and, after changing many hands, went to the East Indian Company in 1849. It is now part of the British Crown Jewels. India has laid claim to it.

6. The Koh-i-Noor, too, is supposed to carry a curse, which is negated only when it is in the hands of a woman (Queen Victoria is ample proof of that). If a male monarch owned the diamond, it was passed on to his wife. Now, that is one practice that can well be continued, curse or no curse, isn’t it?