Debt-burdened households are behind sharp cuts in consumption spending

At this year's U.S. Monetary Policy Forum (USMPF), an annual gathering organized by the Initiative on Global Markets at Chicago Booth, academics, market economists, and policy makers discussed, among other topics, how a housing market collapse combined with a high level of household debt limits the effectiveness of monetary policy. For instance, though the Federal Reserve has lowered interest rates to help homeowners reduce their mortgage payments and avoid delinquency, banks remain unwilling to refinance mortgages on homes that are worth less than the amount owed on them. The ineffectiveness of this policy suggests that the recession and the weak recovery that followed are as much about the large debts carried by homeowners as they are about a decline in housing wealth.

Economists increasingly have recognized the role played by household debt in generating deep and prolonged recessions. Homeowners with large debts experience the sharpest reduction in net worth when a large asset such as housing loses value. This shock sets off the economic downturn, as highly indebted households drastically cut back on consumption. In theory, households with healthier balance sheets ought to pick up the slack by taking advantage of lower interest rates as monetary policy eases. But because nominal interest rates cannot fall below zero, interest rates effectively remain higher than they should be, exacerbating the recession. 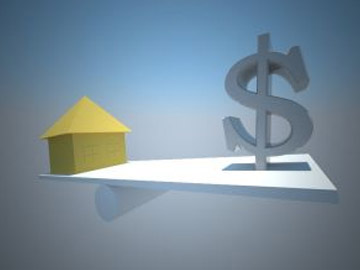 The distribution of debt - the fact that some households are deep in debt while others are not-can turn a housing shock into a grave recession, says Chicago Booth professor Amir Sufi, one of the panelists at the USMPF. If everyone carried moderate levels of debt instead, then more households would be able to refinance and fewer would default on their mortgage.The damage to households' balance sheets would not be so large as to lead to a severe recession, despite a fall in house prices.

Empirical evidence supports these arguments. A new study by Sufi with Atif Mian of the University of California, Berkeley and Kamalesh Rao of MasterCard Advisors shows that the dramatic accumulation of household debt in the United States - in combination with the decline in house prices - is the primary reason for the onset, severity, and length of the subsequent consumption collapse. The study, "Household Balance Sheets, Consumption, and the Economic Slump," is the first to show convincingly at the county and zip-code levels how a shock to households' balance sheets contributed to the Great Recession of 2007 to 2009 and the slow economic recovery that followed.

A SHAKY FINANCIAL POSITION LEADS TO DEEP CUTS
An increase in credit supply, partly because of relaxed lending standards, made it possible for more individuals and families to buy a home than ever before in the years prior to the housing crisis. This credit boom put upward pressure on home prices that, in turn, encouraged many homeowners to borrow against the increasing value of their homes.

But not all households accumulated large debts, according to a previous study by Mian and Sufi on the impact of the housing boom on household debt. Homeowners who lived in counties that experienced bigger house price appreciation borrowed more heavily than others. In particular, house prices increased more in counties where the housing supply is "inelastic," that is, in areas where houses cannot easily be built to meet demand because water bodies and hills make it more costly to expand the stock of housing.

For some time, rising house prices offset the huge debt accumulated by households in high-debt counties. But, in 2007, the housing market unraveled. The value of homes in counties with the most household debt-those in the top 10 percent as measured by households' debt-to-income ratio in 2006-fell by 30 percent. In contrast, low-debt counties- those in the bottom 10 percent-experienced almost no decline in home prices.

Within counties, the decline in auto sales was much larger in zip codes with an inelastic housing supply and a large number of subprime borrowers. These zip codes experienced the largest increase in home equity extraction during the housing boom, which is consistent with a previous finding by Mian and Sufi that households with the lowest credit scores responded more to the fast-paced rise in home values.

Taking all households together, Mian, Rao, and Sufi find that the recession would have been less severe in the absence of what they call the "household balance sheet channel," or the combined impact of high debt levels and sharp declines in house prices on consumption spending. Auto sales fell by 36 percent during the recession, but would have fallen by only 13 percent without the household balance sheet channel. In other words, if high-debt counties looked like low-debt counties, then car sales would have gone down by only one-third of the actual decline. Nonauto retail sales would have grown by 2 percent even during the recession, but instead fell by 12 percent.

THE IMPORTANCE OF DEBT
In a world without mortgages, a decline in house prices should have a negligible impact on consumption. For instance, younger households wishing to buy a bigger home to accommodate their growing families can take advantage of the lower price tag on houses. On the other hand, households planning to downsize may feel poorer because they cannot spend as much as they had hoped out of their housing capital. With both winners and losers, the overall effect on consumption would be fairly small.

However, a fall in house prices would have a significant impact on consumption if households used a substantial amount of debt to purchase a home, as many did before the housing crisis. When the housing market crashed, many mortgages were pushed "underwater," forcing households to repair their impaired balance sheets by reducing their debt and tightening their belts.

One way to reduce debt is to default on mortgage payments. Mian, Rao, and Sufi find that before the housing crisis default rates in high-debt counties were typically well below 5 percent, but shot up to almost 20 percent by the end of the recession. Because debt delinquency has serious consequences, homeowners are likely to cut back on consumption as much as they can to avoid defaulting. In addition, households who fail to pay on time will find it more difficult to buy durable goods on credit because of lower credit scores.

Even households who made their mortgage payments sacrificed consumption to strengthen their balance sheets, by reducing debts. Of the total reduction in household debt in the four years since the recession began, those who defaulted decreased their debt by $870 billion while those who did not default reduced their debt by $287 billion.

Homeowners whose mortgage debt exceeded the current market value of their homes were unable to take out home equity loans or to refinance their mortgages, important factors that reduced consumption. In low-debt counties, the total value of mortgages refinanced when mortgage rates were at a historic low in 2010 was 90 percent higher than it was three years before. In contrast, the value of mortgages refinanced among high-debt households went down by 40 percent during the same period, despite low mortgage rates.

Given the importance of household debt, Sufi says policies that can help households reduce debt-whether by helping refinance their mortgages into lower interest rates or, more aggressively, by restructuring their debt-can lead to faster economic recovery.