Understanding the Power of Networks

A surprising finding on the value of colleague networks leads to an even more remarkable revelation of how networks truly work.

Is it who you know rather than what you know that really matters? People hope that they will be rewarded for their ability and effort, but fear that rewards actually go to those with well-connected friends. That suspicion does not seem so far-fetched. Look around the office. Those who are doing well tend to be colleagues who know people who have an extensive network of contacts. Thus, it would be quite reasonable to assume that the success of a well-connected neighbor could somehow spill over to them.

Just how much of an advantage a neighbor’s network provides is the subject of Neighbor Networks, a thoughtprovoking book by University of Chicago Booth School of Business professor Ronald S. Burt. The answer turned out to be not quite what Burt expected: There is no advantage at all to having well-connected friends. 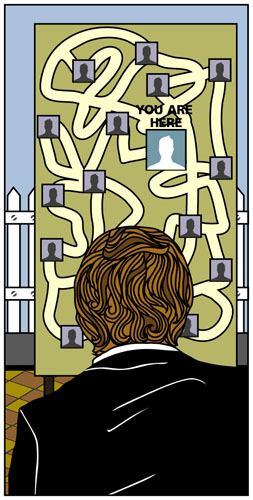 Image: Minal Shetty
Although Burt found a strong correlation between the performance of managers and their affiliation with well-connected colleagues, the relationship disappears when the manager’s own network is held constant. That is, if two people have well-connected friends, then the person who is herself well-connected performs well and the person who does not have her own network of valuable contacts does not do well. Well-connected people have their own interests and need not associate with those who contribute nothing to the relationship and only seek to use them. What really matters for performance is a person’s own network and not that of her friends.
This finding has strong implications for business policy and for understanding the process underlying the value of networks. Information and behavior are almost never observed directly and so are inferred from the way relations are structured. In particular, those who were accustomed to thinking of networks as pipes through which information travels between people might be disappointed. “We seem to have misunderstood how networks work,” Burt says.
Bridging Structural Holes
People tend to cluster into groups and communicate more frequently within rather than between groups. As a result, people within the same group develop similar views. They tire of repeating arguments and stories explaining why they believe and behave the way they do, so they make up shorthand phrases, jargon, and a whole system of phrasing, opinions, symbols, and behaviors defining what it means to be a member of the group. Over time, the tacit knowledge that is meaningful to insiders becomes more complex, making knowledge more difficult to move to other groups. Information becomes “sticky,” such that holes tear open in the flow of information between groups. These holes in the social structure of communication are what are known as “structural holes.” Structural holes present two opportunities for networks to affect the productivity of individuals and groups: brokerage and closure.
Closure is about staying on one side of the structural hole, such that the members of a group keep to themselves and are not exposed to variations in opinion and behavior. As a result, members of such a closed network think less about alternatives but are able to focus more on getting better and becoming even more efficient at the one thing that they already know how to do well.
Brokerage is the opposite. Unlike closure, network brokerage is about building connections across structural holes and taking advantage of a person’s exposure to variations in opinion and behavior.
In a corporate organization, for instance, the staff of one department typically talks more to people within their group than it does to people in other departments, such that structural holes tear open between departments. A manager who seeks to connect these diverse groups by maintaining contacts in a number of departments will be able to quickly see alternative ways to go, synthesize new ways to go, and find a broader range of ways to support an initiative, thanks to his exposure to diverse ideas and behaviors. The ability to do these things is what is correlated with higher salaries, better evaluations, and faster promotions.


Before these recent results on neighbor networks were known, researchers presumed that the benefit from bridging structural holes was driven by information flowing to managers from different people in their network, allowing managers to see various ideas and opportunities that others do not. This is an image of networks as glasses, says Burt, because they improve limited vision.
If this explanation of how networks work were correct, then it would also be true that a person could benefit by associating with well-connected colleagues, even if she herself is not, because she could easily obtain valuable information through the well-connected colleagues. However, if there is no benefit at all to having well-connected friends—as the new evidence shows—then it no longer makes sense to say that access to information is the basis for network advantage.
Seek to Be Worth Knowing
At cocktail parties, people often work the room looking to make contacts. They look at the crowd and carefully choose who to start a conversation with, hoping that this effort to “network” will yield valuable information. That is the wrong way to get benefits out of a network. “The way networks have their effect is not by getting information from people, but rather by finding people who are interesting and who think differently from you,” says Burt. Networks give people a “vision advantage” in terms of seeing and developing rewarding opportunities. But the lack of spillover from a neighbor’s network implies that this advantage comes not from having access to new information, but rather from having to juggle diverse bits of information. This is the key shift that Burt emphasizes in his book. “It is not being in the know, but rather having to translate between different groups so that you develop gifts of analogy, metaphor, and communicating between people who have difficulty communicating to each other,” says Burt.
In other words, networks are a way to develop human capital. Instead of better glasses, networks give people better eyes. Networks change who you are in the sense that a manager becomes more experienced and skillful over time at working across people with diverse views and behaviors. In the course of managing contradictory relationships, the manager develops cognitive skills of analogy and synthesis, and emotional skills for reading, engaging, and motivating colleagues. The manager comes to have an advantage in detecting opportunities to productively combine ideas and practice across groups, and an advantage in seeing alternative ways to bring the opportunities to fruition.
This argument implies that one cannot hope to get ahead of others just by finding the “right” network. “People think of their network as something they can expand, or buy a new version of, or change in some dramatic way as if it were clothing that you can take off and put on,” Burt says. A network does not give added competitive advantage independent of your effort. Rather, it allows a person to become more skillful at managing various connections so that he gains greater competitive advantage. It is what a person does with his network that counts.
In light of Burt’s findings, business programs based on the belief that associating with well-connected people brings about substantial benefits ought to be revisited. For instance, employees are encouraged and even expected to network through colleagues. Mentoring programs call on well-connected senior people to facilitate the recognition and development of promising junior people. “Onboarding” programs use well-connected insiders to ease the social integration of new hires. Businesses need to ask whether there is a value to these programs beyond the hope that benefits will spillover between adjacent colleagues in a network.
Indeed, it might not be who or what you know that creates advantage, but rather more simply, who you become by dint of how you hang out—the disadvantaged hang out with folks just like themselves, while the advantaged engage folks of diverse opinion and practice.