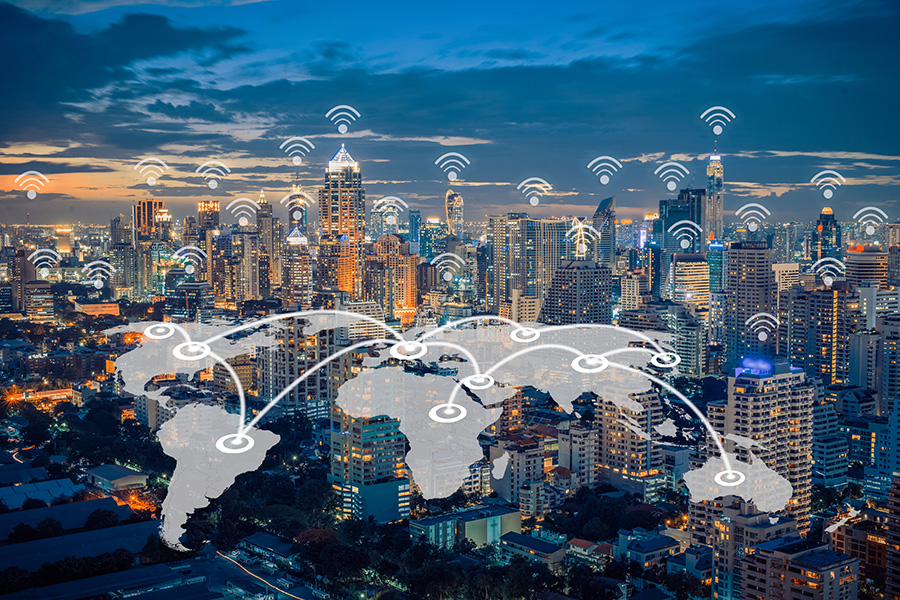 Image: Shutterstock
From the smoke signal to email, advances in communication have always had organizational consequences. In this four-part series, we look first, at what coaches and academics have learned about electronic networks; second, at what the latest research says about how to make your personal network work for you; and third, at some of the innovative ways that Chinese businesses use social networks. In this final installment, we look at how professional networks might evolve, and what impact those changes may have on the working world.

In the first three parts of this series, we looked at how online networking systems such as LinkedIn and Weibo in China are changing the way people find and do work. In the final part of this series, we’ll look at where some observers of the virtual working world think this functionality may be heading, and what consequences that might have for professionals everywhere.

Jaideep Prabhu, Jawaharlal Nehru Professor of Business and Enterprise at the Judge Business School at Cambridge University, sees both utopian and dystopian possibilities ahead for virtual networking.

“The utopian outcome is that it makes it easier to find opportunities and reduce transaction costs,” says Prabhu, co-author of Jugaad Innovation: Think Frugal, Be Flexible, Generate Breakthrough Growth.

Data analytics should help analysts identify factors that correlate with success in a particular kind of project or occupation, he says, which should help break down certain kinds of older networks that weren’t based on merit. “In the past, [business] was very insider/outsider. When you were on the inside, you had more access,” he said.

And the dystopian? “That people misuse the data or use it in some way to entrench an elite, extract rents, or manipulate people.” Prabhu points to the networking technology that made it possible to direct fake news stories to people receptive to their messages, which may have contributed to the pro-Brexit vote in the United Kingdom and the election of Donald Trump in the US.

“Although it is gloriously impossible to predict what will happen next on the Internet, networking — the connecting of people — is so core to the Net that it’s probably a good guess to assume that it will often be among the first implementations of whatever the Net makes possible. So, if (when) virtual reality becomes an expected part of our Internet experience, virtual social networking is very likely to be among the first manifestations of VR,” says Weinberger, co-author of the Cluetrain Manifesto, a series of prescient essays published in 1999 that argued the Internet would soon render traditional marketing obsolete.

Networking sites are also likely to have more opportunities to better understand their users, particularly now that they have so much data to hand, Weinberger predicts. “Now that these systems have generated so much data, machine learning can take them to the next step by discovering patterns among thousands of factors—many seemingly irrelevant—that can with some accuracy predict what and who we will find interesting,” he says.

“Tuned correctly, these machine learning engines will put information in front of our eyes that we will find important, fascinating, and stimulating of thought even if we would never have predicted it,” Weinberger adds.

And the risks? Weinberger believes that Internet services could use their machine-learning insights to advance a narrow commercial agenda at the expense of societal gains. “We should be aware of this and act to make sure the marvels of our new machines are used to advance the most human of our human interests,” he says.

Instead of today’s system, he predicts tools that will enable people to maintain a more nuanced connection with a person or an organization, not just a binary link—including your instructions on the kinds of people you would rather not hear from. At the same time, Konsynski adds, intelligent agents will make it possible for the relevant connections and information to “flock” around a particular issue.

Already, specialized services such as recruiting are beginning to incorporate artificial intelligenceinto their work. For instance, Ideal, a Toronto software company, claims that its automated screening system saves 23 hours per hire, reduces the cost per candidate screened by 75 percent, and cuts down turnover by 35 percent. However, Ideal marketers caution that there are limitations: because the Ideal system studies past hires and incorporates those insights into screening future employees, HR executives need to take care to make sure they haven’t accidentally trained their new virtual employee to make the same old latent gender and ethnically-biased decisions they might have made with a manual process.

Internal collaboration tools are also getting more useful. Already, a new AI-powered tool now offered by the popular business chat app Slack (an acronym that stands for Searchable Log of All Conversation and Knowledge), can search all the discussions inside your company about a particular issue and identify the people who talk about it most.

The project visibility that a collaborative tool such as Slack can facilitate may be speeding up business in a different way as well. In business to business communication, for example, R/GA, a New York-headquartered design firm that uses Slack, claims that being able to give the client complete visibility on the design process has made decision-making as much as 40 percent faster.

In the long run, the greater ease of networking seems likely to affect the structure of organizations, but precisely how isn’t very clear.

Andrew Odlyzko, Professor of Mathematics at the University of Minnesota and a scholar of transportation and communication network effects, said the situation reminded him of something said by Ronald Coase, the University of Chicago economist that Odlyzko quoted in his 1999 history of communications and its implications for the Internet.

In the 1930s, Coase had theorized that people form firms because it’s cheaper and more efficient to work together than separately. His theory had a revival in the late 90s when the Internet led many people to use his concept of the relationship between transaction costs and firm size to suggest that the big corporation was doomed. However, in addition to a growth in the number of small firms, the late 90s also saw a huge wave of mergers and acquisitions.  So which was it? Maybe both, Coase answered:

Bigger firms? Smaller firms? No firms at all? Two decades later, the jury is still out. However, curious readers may want to keep asking the question. One of these days, a helpful bot may overhear you and introduce you to someone who has the answer.