The bulls may not be back any time soon. Don't put your money where other mouths are 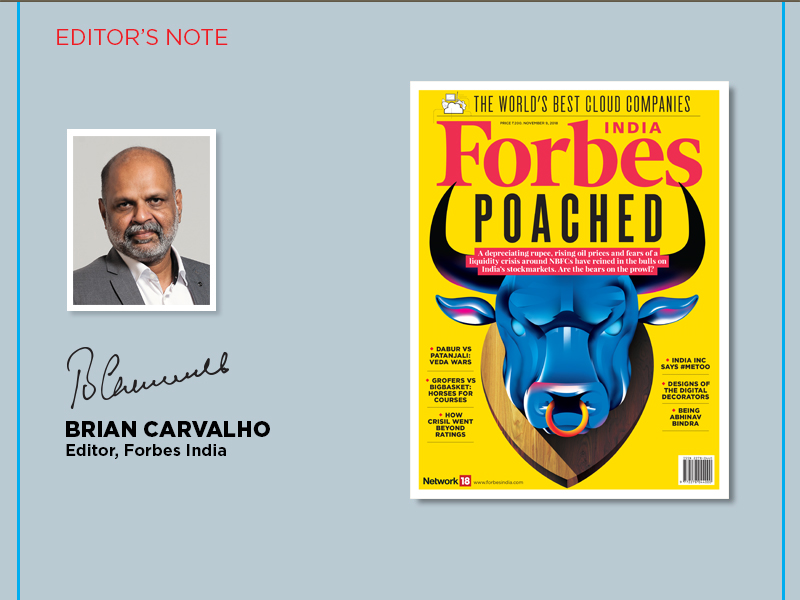 For someone who doesn’t invest in equities, the unsolicited advice over the past fortnight to do just that helped me make up my mind about one thing: If ever I was to take the plunge, it certainly wouldn’t be now.

It didn’t help that much of that counsel was to buy smaller stocks–mid-caps and small-caps that had been taken to the cleaners, many of them having lost almost three-fourths of their value in 2018. The investment logic: Valuations have taken such a hammering—although many such stocks may still be overvalued on a longer-term basis—that they now look realistic; strong earnings around the corner would also help justify the buying interest.

It’s a fair argument, you would be tempted to say but, as Forbes India’s Samar Srivastava points out in this fortnight’s cover story, improved performance isn’t always translating into higher multiples for future growth—a classic sign that signals the advent of a bear market.

Over the past fortnight, similar warning signs have been flashing brightly: Narrowing market breath, with the number of stocks declining far outnumbering those on the rise; and die-hard optimists pointing to marginal daily index gains that inevitably follow bloodbaths—or what is known as a dead-cat bounce—to indicate that the bulls are back. They’re not.

There’s another amber sign flashing that may indicate that the bulls have been reined in for now—the price-earnings multiple (PE) of one of the mainline indices, the Nifty 50. As Tanushree Banerjee, editor of The 5 Minute WrapUp, a popular newsletter from research firm Equitymaster, put it not too long ago: “The current valuation of the index—more than 22x—is rare. Over the past two decades, the NSE Nifty has traded above 22x only nine times. And when it does, buying even the biggest blue chips has come with a huge downside for long-term investors.” Banerjee wrote this in March 2017 when the Sensex was around 30,000 and the Nifty was valued over 22. At the time of writing, guess what was the Nifty P/E: Over 25. And while the benchmark indices may still not reflect the onset of a bear market, their broader counterparts do; the NSE midcap index is down by a fifth in 2018, and its small-cap cousin by a third. Read Srivastava’s piece on page 22 to see how a depreciating rupee, rising oil prices and the fear of a liquidity crisis around non-banking finance companies have conspired to spook the bulls. The short point: The bulls may not be back any time soon. The shorter point: Don’t put your money where other mouths are.

If there are investing fads–trends that are typically unsustainable over the long term—there may also be consumer fads. Remember how Patanjali Ayurved, founded by a yoga guru, took the country by storm a few years ago? Its toothpastes, natural treatments and even noodles found lakhs of consumers, many of them followers of the Ramdev school of yoga. Ramdev positioned himself as a swadeshi price warrior, threatening to send the foreign competitors in consumer care and consumer foods back home. That may not have happened, but what did happen was that it took the spotlight away from the real McCoy in natural/ayurvedic products: Dabur, a company with a 130-year legacy. Forbes India’s Rajiv Singh shines a light on Dabur’s efforts to reclaim its position as the first mover in the ayurvedic space.
Best,
Brian Carvalho
Editor, Forbes India
Email:Brian.Carvalho@nw18.com
Twitter id:@Brianc_Ed