Rushing the big white hope of the antidote

Dr Reddy's Laboratories, risk-taker and pioneer of several new drugs and R&D has its reasons for partnering with Russia, which go way beyond the vaccine. 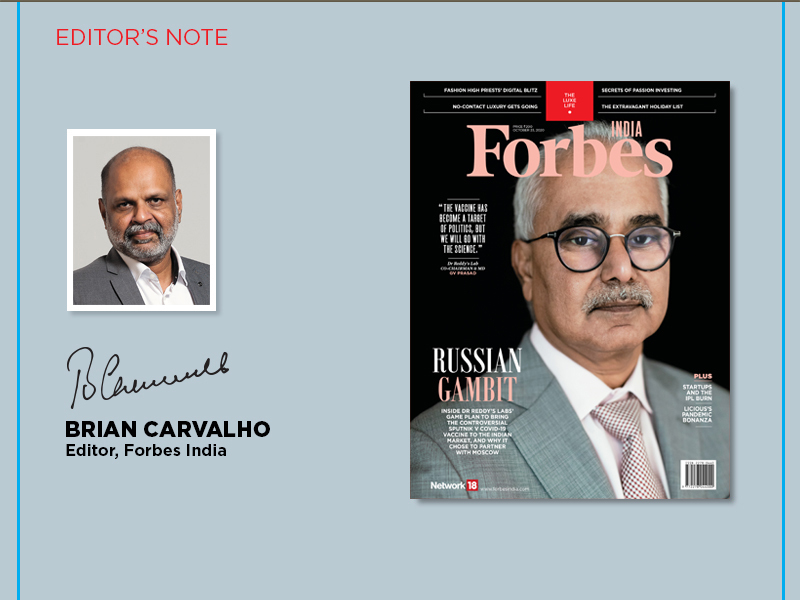 As India and the world pull out all stops to control the Covid-19 pandemic, the big white hope looms on the not-so-distant horizon: A fast-tracked launch of a vaccine to mitigate a global health crisis without compromising on efficacy and safety. The United States, on top of the heap in total cases and deaths due the coronavirus, is in overdrive, with the National Institutes of Health working with more than 18 biopharma companies to accelerate vaccine development. Across the world, from Chile to China, health authorities have either approved or are set to approve phase III clinical trials—the critical step to ascertain the efficacy and safety of a vaccine on a large group of individuals. In India, the government is gearing up to administer 400-500 million Covid-19 vaccine doses to 200-250 million Indians by July 2021. In August, the apex drug regulator, the Drugs Controller General of India (DCGI), gave the Serum Institute of India a go-ahead to conduct phase II and III of human clinical trials on the vaccine developed by Oxford University and AstraZeneca. Called Covishield, it is the first candidate to progress this far in India. Other Indian companies aiming to get there include Biological E (in partnership with Janssen Pharmaceutical, an arm of Johnson & Johnson), Panacea Biotec (with Refana of the US), Bharat Biotech and Zydus Cadila. And then there’s the relative Johnny-come-lately Dr Reddy’s Laboratories (DRL) which is betting on a partnership with the Russian government to sell the controversial Sputnik V in India. It’s controversial because the vaccine, developed by the Gamaleya Research Institute in Moscow with support from Russian Direct Investment Fund (RDIF), a sovereign wealth fund, has been approved by the ministry of health of the Russian Federation—without it having entered phase III trials! (Last fortnight, reports suggested that some 3,000 Moscow residents had taken the shot, and that over 60,000 volunteers had signed up). So how safe and effective will this vaccine be is anybody’s guess. In mid-September, DRL announced an alliance with RDIF to distribute 100 million doses of the vaccine in India, once it receives the regulator’s go-ahead. For its part, DRL is no stranger to risk. It was a pioneer in attempting to discover new drugs, and had one of the highest annual R&D spends in Indian pharma. But when success proved largely elusive for its candidates in the long journey from lab to market, it opted for a more pragmatic strategy of sharing development risks with global counterparts. The vaccine gambit is, however, different. As GV Prasad, co-chairman & managing director of DRL, tells Manu Balachandran who has penned this fortnight’s cover story, there’s not much to be spent in investments, and “nobody is going to profiteer from the vaccine”. DRL has its reasons for partnering with Russia, which go beyond vaccines. To know more about the triggers for the alliance, and DRL’s special relationship with Russia, ‘From Russia, With Love’ is a must-read. Six months of Covid-19-induced lockdowns may have taken a toll on sentiment, but the festive season is unlikely to keep consumers—at least those at the top of the pyramid with the power to purchase—shackled for much longer. As Pankti Mehta Kadakia observes in our Luxury Special, the high net worth elite are coming to terms with a no-contact shopping experience, replete with 3D body scanning and virtual showrooms. And Naandika Tripathi and Naini Thaker delve into the newfound digital world of India’s high priests of fashion. Don’t miss ‘Click for Couture’, along with much more in ‘The Luxe Life’.

Tweets by @forbes_india
Most employees retaliate if they're slighted at work
Podcast: Why is Dr Reddy's Laboratories bringing the Russian vaccine to India?