Two distinct themes emerge from a cursory glance at the rich list: Digital and health 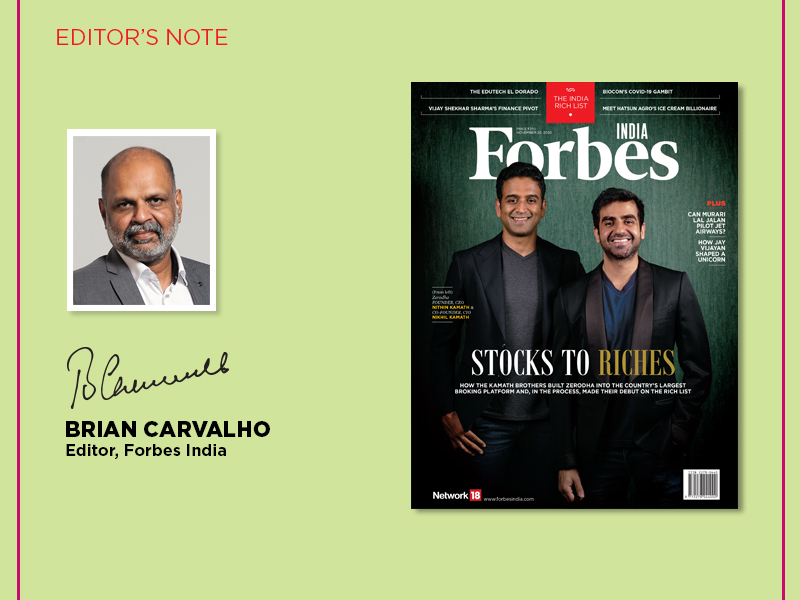 It has become a truism that the rich have got richer and the poor have lost even more of their privileges during the pandemic. The 2020 Forbes India Rich List is, at first blush, a manifestation of the rich-get-richer theme: The 100 richest of the country saw their wealth grow by 14 percent to $517.5 billion till over a year ago (the cut-off for the study was September 18). And, as Naazneen Karmali, Forbes Asia Wealth Editor and India Editor of Forbes Asia who spearheaded the study, writes: “More than half of that increase can be ascribed to one individual: Mukesh Ambani, who added $37.3 billion to his fortune—a surge of 73 percent—to a net worth of $88.7 billion.” The numero uno on the Rich List for the 13th year now raised more than $20 billion for Reliance’s digital arm Jio Platforms from investors that included Facebook and Google.

Two distinct themes emerge from a cursory glance at the list: Digital and health. Online business models that helped consumers pivot into the virtual world comprise one set of the big gainers. Take, for instance, the Byju’s-led edutech brigade, which collectively raised some $1.7 billion so far in 2020, as against just $409 million last year. The co-founders of Byju’s are up from No 72 last year to No 46, with their net worth burgeoning from $1.9 billion to $3.05 billion.

The Forbes India cover story this fortnight is on another kind of online business, a discount brokerage firm, which has emerged as India’s No 1 in terms of active users. In the process, the brothers who founded Zerodha, Nikhil and Nithin Kamath, have debuted on the 2020 Forbes India Rich List at No 90 with a net worth of $1.55 billion.

The other set of winners are drug firms, particularly those making medicines to treat the viral scourge as well as those holding out the hope of a vaccine to immunise the world. Biocon’s Kiran Mazumdar-Shaw, the biggest gainer this year, is counting on a repurposed psoriasis drug, Itolizumab, whose sales shot through the roof after it received the nod for restricted emergency use for Covid-19 treatment.

And Serum Institute CEO Adar Poonawalla, whose father Cyrus Poonawalla is worth $11.5 billion and ranked No 6 on the Rich List (a jump of six places since a year ago), is pulling out all stops to produce a Covid-19 vaccine. In the past six months, Serum has sealed five licensing partnerships, the biggest of them with AstraZeneca of the United Kingdom. While Mazumdar-Shaw’s wealth nearly doubled to $4.6 billion, Cyrus Poonawalla is 26 percent richer this year.

With humongous wealth also comes humongous responsibility. The first is of decisive leadership for business owners and CEOs, to ensure optimal economic activity, and with it employment and livelihoods. The other obligation that goes hand-in-hand is of rebuilding lives. Health crises of the past like the Spanish Flu of 1918 offer vital clues to what the super-rich can and should be doing at a time when global poverty is expected to increase in 2020 for the first time in two decades. It was, after all, the donations of billionaires like John D Rockefeller and Johns Hopkins that laid the ground for America’s health and education systems. For more on what India’s new breed of philanthropists are busy with, keep an eye out for the following issue of Forbes India.