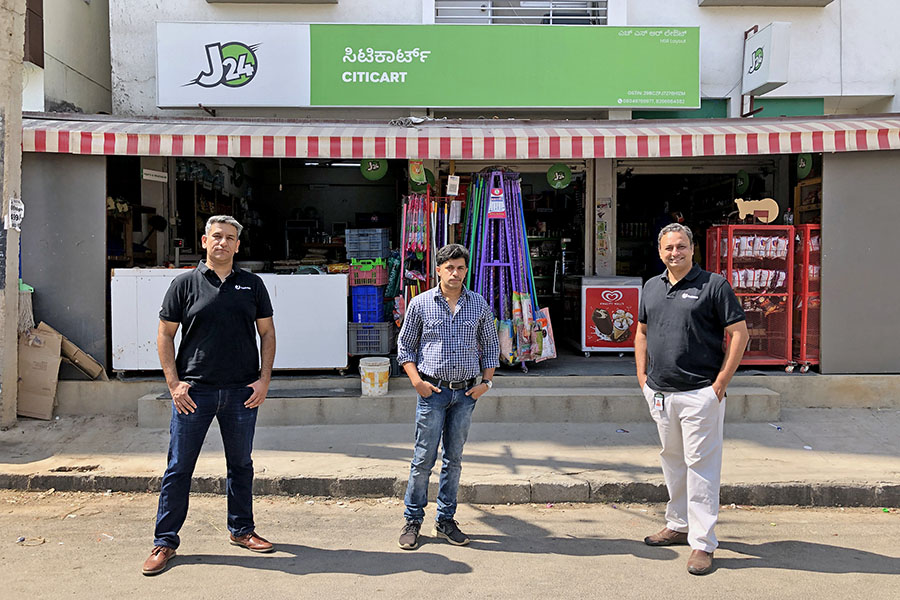 It’s 8 pm and Ramesh Sirvee has just wrapped up his day’s work. Normally, he would shut shop at 10 pm, he says, but because of the lockdown he’s had to restrict working hours at his neighbourhood grocery store in Bengaluru’s Hirandahalli area.

Earlier, even after downing shutters, Sirvee would spend another hour or so tallying the day’s sales scribbled in his khata, or ledger.

Since signing up with KhataBook, a Bengaluru-based startup that lets shopkeepers maintain a digital ledger, Sirvee has been able to save time, cut inefficiencies and, importantly, cut his pending receivables by half. So if he was owed ₹8 lakh at the end of the month by customers buying items on credit, he’s been able to retrieve at least ₹4 lakh in a week, instead of waiting for a month or longer for them to pay up. “Often I would forget who owed us what and we would never get our payment,” says Sirvee. Now with KhataBook—which he has been using for almost two years—timely reminders are sent to him as well as his customers on pending payments via SMS.

The benefit is so tangible that in little more than two years of functioning, KhataBook has been able to amass 80 lakh active business users in 5,000 cities. “No company across the world has been able to on-board so many businesses in such a short time. To give you a sense of scale, after 12 months of launch, Slack, the previous record holder, had half the number of daily active users as KhataBook had at the same point in our journey. So an Indian company now has the record for being the world’s fastest growing B2B company,” says Ravish Naresh, co-founder and CEO, KhataBook. The Tencent and Sequoia-backed startup supports 15 local languages and its customers are largely spread out in tier 2 and 3 cities.

By some estimates there are 12 million kirana stores, like Sirvee’s, across India, and they account for around 95 percent of the country's roughly $500 billion food and grocery market. While online food and grocery retail has made headway in the country, it still counts for just 0.2 percent of sales, according to consulting firm Redseer.

That’s why startups like KhataBook, as well as larger players like Amazon, Walmart-owned Flipkart and Metro Cash and Carry are wooing kirana stores.

Social media giant Facebook is the latest to swoop in on the segment with its purchase of a 9.9 percent stake in Reliance Jio for $5.7 billion. The synergy lies in the integration of WhatsApp with JioMart, a fledgling ecommerce joint venture between telecom player Jio and Reliance Retail, the country’s largest physical retailer with over 10,000 stores across 6,700 cities.

“By bringing together JioMart with WhatsApp we can enable people to connect with businesses, shop and ultimately purchase products in a seamless mobile experience,” said David Fischer, Facebook’s chief revenue officer, and Ajit Mohan, India managing director, in a statement. Reliance Industries Chairman Mukesh Ambani, in a video message, spoke about how the combine would help India’s millions of kirana stores come online. (Reliance Industries is the owner of Network 18, publisher of Forbes India.)

From buying more efficiently to selling more efficiently, companies, large and small, are helping kirana stores across the value chain. Take, for instance, Jumbotail. Set up by two Stanford graduates, the Bengaluru-based startup solves a pressing pain point—that of kirana store owners having to deal with multiple distributors for multiple products. 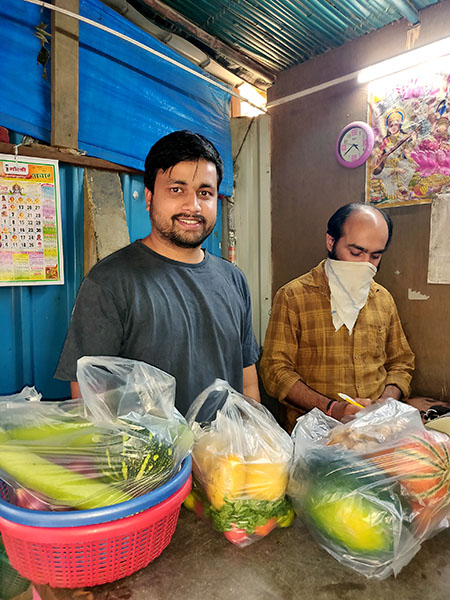 Vivek Kumar, co-founder and CEO, RaseedBook at a grocery story
Oftentimes a store owner has to deal with up to 40 distributors on a weekly basis for 40 different products from soaps to food grains. Jumbotail’s marketplace app allows store owners to buy goods at wholesale prices and get next-day delivery. “Most people start out on the supply side by aggregating, say, farmers. The challenge with that is the inherent structure of India’s food and grocery ecosystem, where supply and demand are both highly fragmented,” says Ashish Jhina, Jumbotail’s co-founder and CEO. “Instead we decided to start on the demand side by aggregating kiranas and then work backwards to stitch the whole supply chain together.”

Similarly, German B2B retailer Metro Cash and Carry, which entered India in 2003, has made kiranas a “focus segment” over the last three years, says CEO Arvind Mediratta. It allows store owners to buy wholesale goods, either online or from a store, and also offers point of sale devices, modules on how to run store operations more efficiently and simple analytics to better serve customers. “Digital is a means to an end for us,” says Mediratta. “The end objective is to help kirana stores generate more sales, more profits and more cash flows.”

Not to be left behind in the race, Amazon India launched its 'Local Shops on Amazon' programme, a day after the Jio-Facebook deal was announced. The programme, which has been in a pilot phase for the last six months, allows shopkeepers to list their products on Amazon’s website and thereby supplement their footfalls with a digital presence, says Gopal Pillai, vice president, seller services, Amazon India. Already 5,000 retailers have signed up for the programme to which Amazon has committed ₹10 crore.

Amazon has been working with small store owners since mid-2015, having launched ‘I Have Space’, an initiative where local shops receive and deliver goods in the neighbourhood on behalf of Amazon. The programme is a win-win for all, says Pillai, as the store owners earn an additional income, while Amazon improves last-mile connectivity.

“The timing is right,” says Vivek Kumar of RaseedBook, a-year-old billing and record keeping service for local businesses. “Kirana store owners have taken a beating from ecommerce players over the last few years and are ready to fight back now,” he says.

The coronavirus crisis and the consequent lockdown provided the added impetus. So much so that Kumar revived Alluzo, an app he created while studying at IIM-Indore to help students order groceries online from nearby vendors. “It worked back then because the crowd was tech-savvy,” says Kumar of his co-students, “but on graduating [in 2017] we realised that getting kiranas to sell online didn’t make sense when their backend infrastructure wasn’t in place.” So along with co-founder Ashutosh Pathak, he halted work on Alluzo and instead set up RaseedBook to help store owners with digital book-keeping and inventory management.

While the timing may be right, there are other motives too for small and big players to tie up with kirana stores. Not least, to acquire and retain customers—especially the next 400 million that are expected to come online by 2022, according to consultancy PwC.

Along with those customers comes invaluable data.

So far, FMCG brands have had to rely on information passed on to them from distributors about which product is selling or not selling from local stores. But now the companies directly liaising with kirana stores can provide brands with real-time, granular data, which can easily be monetised. At present, however, startups like KhataBook and RaseedBook are focussed on customer aggregation and not monetisation, say the founders.

So who will win the race? “Those who take a platform or ecosystem approach will come out on top,” says Jumbotail’s Jhina. “It’s cumbersome for a kirana store owner to use multiple apps for multiple needs. If you can be a one-stop shop, they’ll take to it.”

“The approach has to be wholesome and holistic,” concurs Mediratta of Metro Cash and Carry. Among other services, the B2B player also offers kirana store owners—and their customers—credit via its tie-up with fintech startup ePayLater.
Even so, the ubiquity of WhatsApp makes the Jio-Facebook combine a powerful one. “Every home has WhatsApp today. Most kirana store owners also use it,” says Roy. That makes the transition to online easier for them, he reasons, adding that other players don’t have this “advantage”.

Moreover, like Jumbotail and Metro Cash and Carry, JioMart, which piloted operations in suburban Mumbai in January, also replenishes store owners’ goods through its app. That Reliance Retail is the largest offline retailer in the country adds to its heft—enabling better bargains for store owners.

But as Mediratta points out, trust is equally important. “Unlike a B2C player [think JioMart or Amazon or Flipkart] we don’t pose a threat to store owners. We only do B2B. So the fear that we will take away their customers is not there. They have complete trust in us,” he says.

While the market may currently be big enough for several players—big and small—to coexist, in a couple of years, consolidation will be imminent. “Eventually there’ll be four to five players in the market,” says Jhina.

In the meantime, the blurring of boundaries between traditional and modern retail is already underway. On the one hand kirana stores are coming online while on the other ecommerce players are getting ever more hyperlocal and closer to the customer.

Local is indeed the new global.

Tweets by @forbesindia
Instagram wants its influencers to make more money
Photo of the Day: When airports turn quarantine centres