The show must go on(line)

With venues shut, artistes are moving to digital events and finding new audiences 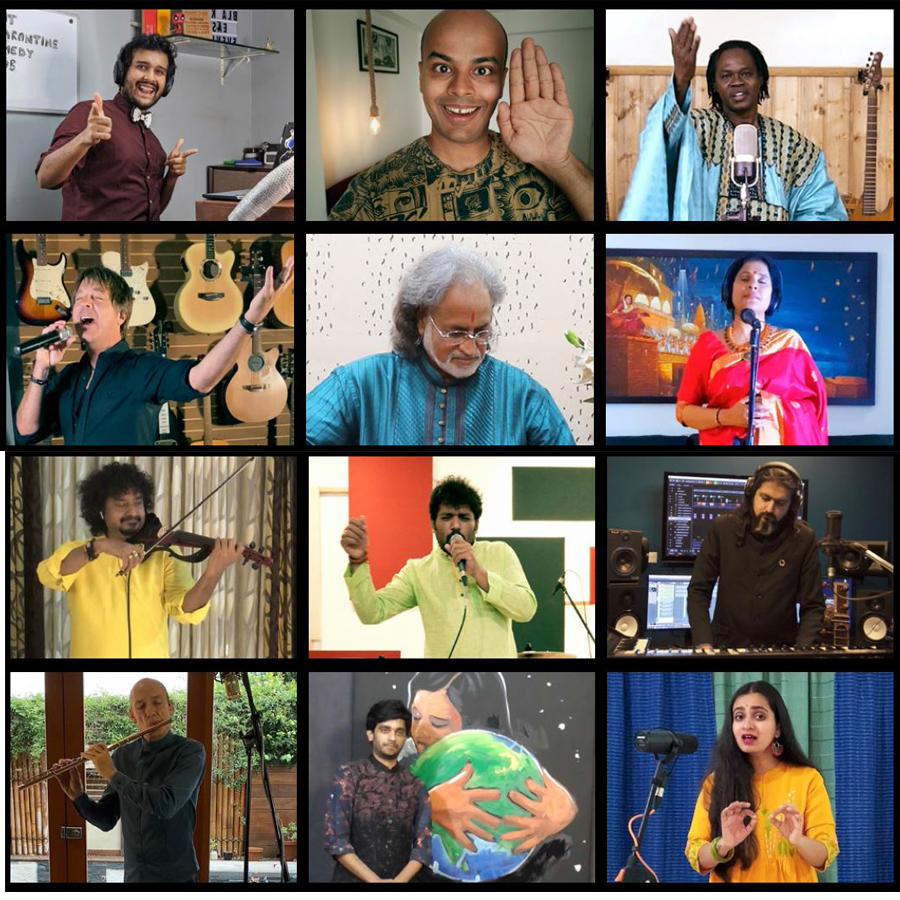 In early March, before the country went into lockdown, Only Much Louder (OML), an artiste and event management company, cancelled The Circuit, a comedy festival scheduled for March 7 to 15 that was to travel to Mumbai, Delhi and Bengaluru. Within a month of its original plan, OML took The Circuit online. The show, conducted on online ticketing platform PayTm Insider’s Zoom interface from April 22 to 26, didn’t just get an audience that logged in, but also recreated the atmosphere of watching a live show where the audience laughed at a joke and everyone could hear each other. “It is the artiste’s choice to keep the audio and video of their attendees switched on or not, to give a better effect of a live crowd. The feedback is going to the artistes and within the participants in real-time; it’s not too different from going to an event other than the fact that you’re sitting at home. You can see and hear the other participants,” says Shreyas Srinivasan, CEO, PayTm Insider.

While an online event can’t completely make up for the energy, laughter, cheering and applause of a real-life event, in a locked-down world, technology is helping entertainment come as close as it can to the real thing; a world where live performances, mass gatherings and sporting events are set to be on hold until the end of this year or perhaps even longer.

“It is going to take time to go back to normal and as a social responsibility we should not open any live entertainment till next March,” says Ramani Iyer, co-founder of One Page Spotlight, a digital platform founded two years ago. On Earth Day, April 22, it organised a 60-minute concert, Ricky Kej Live, featuring 40 musicians, including five Grammy award winners, from six countries. “Companies like ours need to make sure artistes are engaged and are being able to make money online,” he adds.

Programmed by Ricky Kej, and keeping the theme of Earth Day in mind, the artistes performed from their homes and the songs were later mixed with the sound, and the concert was created and recorded. A bit more work was done to create an experience that gave the effect of a live concert. “You get the feel of a live concert,” says Shilpa Ramesh Ramani, co-founder, One Page Spotlight. “In the middle of the concert, Kej actually said, ‘I can’t hear you guys’. He’s waiting for applause,” she adds.

OML successfully monetising the digital version of The Circuit—The Roast, one of its most popular acts, got an audience of 250—is just one of the examples of how things might continue for a while. “Not only have we found fans to pay for tickets, but it’s also nice to see that brands are opening up for this,” says Gunjan Arya, CEO, OML. Tickets were emailed to audience members with a code that could be used to dial into the Zoom call.

PayTm Insider, which averages over 100 events per week on its platform, is also the exclusive ticketing partner for some of the largest events in India, including four Indian Premier League (IPL) teams, which comprise its biggest sources of revenue. The platform saw most of its live music concerts and comedy shows in March cancelled, including the Lil Flea in Mumbai. It then quickly moved to launching a platform for digital events, which allowed companies to list, create and manage digital events on the platform as OML did for The Circuit.

The events are accelerating, and Insider helps provide access to people from across the country to events via Zoom or an interactive video option on the platform, besides taking care of the ticketing and ticket security (ensuring only ticket holders attend the digital event). “We think a lot of real events will now become digital events,” says Srinivasan. He and his team are also building tools to further improve the platform, and enable artistes to manage video conferences easily.

Besides, he adds, “We are getting interesting formats that did not exist as real events, but can only be created as digital events." He explains, for instance, the Bandersnatch concept of a play where the audience chooses the sequence of events and it proceeds accordingly.

Events where a large audience plays Ludo King, Housie and dumb charades are also among the many other games coming up on PayTm Insider.

Digital events also lower the barriers to taking events global. For instance, OML took one of its biggest properties, the Bacardi NH7 Weekender online, where various artistes’ performances from around the globe are live-streamed through Instagram. While The Weekender gets a footfall of 1 lakh in Pune and Shillong, it got over 110 lakh unique views online. Though the event was free on Instagram, the artistes were paid. “Paying artistes is very important. Bacardi NH7 Weekender was built with their very necessary participation. And finally, it always helps the ecosystem. Our job is to grow the pie instead of simply taking a slice out of it,”says Arya.

They also provide interactivity, where people can leave comments and feedback on the performances. For instance, Tomorrowland Live, already in week 5, has been using Zoom to reach a global audience and its social media to increase interactivity, making it one of the most successful digital events, as it was on the ground.

Sporting events too are looking at virtual realities. Says Dhaval Ponda, global head, media and entertainment services, Tata Communications, “The live events industry has been disrupted. Not only the cadence of the sports event, but also the way interaction takes place, and the way sports events will take place for quite some time. All the sports federations are looking at ways to adapt to, and also exist in, these situations.”

Tata Communications does live video broadcast for a majority of global sports. Due to the Covid-19 pandemic, sporting leagues being cancelled or being played without spectators, virtual or via a simulator, have become common. “We are in talks with 90 percent of the sporting leagues globally. A majority of those are looking at carrying out events behind closed doors,” says Ponda.
Sportsmen, too, are working from home. For example: A virtual race with racers sitting at home and competing on a simulator. Through this, sporting federations are able to reach out to not only their existing audiences, but also a wider one that is interested in the novelty of the sport.

To broadcast the same, Tata Communication uses remote production. Ponda explains: “Suppose a race is going to take place at Phillip Island in Australia, and the core broadcast production team is in Barcelona. Within milliseconds, the live video is transported from Phillip Island to Barcelona where a team of 250 people, sitting at home, create broadcast-produced feed that goes out globally to all their rights-holding broadcasters.” 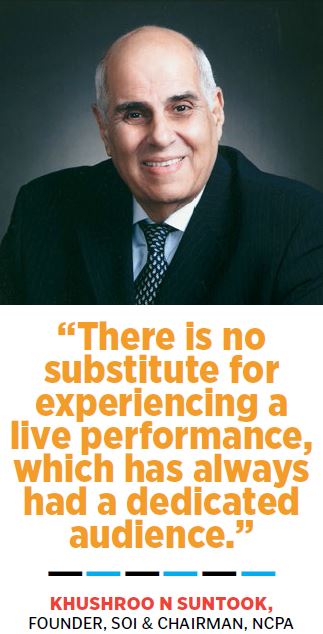 In a traditional scenario, the 250 people would’ve travelled to the location of the race, incurring costs of travel and logistics. Through remote production, not only does the cost go down, it becomes simpler and the money saved can be invested in technology and R&D.

While several entertainment firms have been streaming recorded performances for free, they are also helping artistes engage with the community with workshops and chats. “The intent is to spread positivity through art in these unprecedented times,” says Khushroo N Suntook, founder of the Symphony Orchestra of India (SOI) and chairman of the National Centre for Performing Arts (NCPA), in Mumbai.
The centre has been streaming performances, and has conducted a live Kathak dance workshop on World Dance Day on April 29; for International Jazz Day, it streamed videos featuring 70 artistes from the largest jazz hubs globally, on April 29 and May 1. SOI also released its first online recording of Air by Karl Jenkins on its Facebook page.

Globally, drive-in theatres and drive-in leagues are seeing a revival. It allows for community viewing while maintaining social distancing, as the audience is confined to their own vehicles.

The return to live venues will be a slow and gradual process. Experts believe that while some people might try and return to the pre-Covid-19 form of entertainment, a more cautious audience will maintain social distancing standards. Srinivasan says, “Till there is no vaccine, there’s going to be a risk of being at an event with anything above 50 people.”

Performance venues like the NCPA are putting measures in place. “Social distancing and hygiene will continue being the priority post the lockdown. Deep cleaning of venues is an important part of our operations,” says Suntook. “The cancellation of performances does come at a cost but more than the economics, it is culture that has had to take a backseat.”

An entire industry will also have to change its way of working to create content, be it for cinema or television. “Now to be able to plan an entire industry around it, is a mammoth task,” says Arya of OML.

She cites the example of a show in the West where an entire episode of a courtroom drama was shot remotely and then stitched together. The entertainment industry globally is likely to see innovations like these, to start creating content under appropriate conditions. “The first thing that is likely to start is the shoot, because there you can control the environment. That will be the most immediate measure before large-scale events come back,” says Arya.

Another major change is likely to be the rise of private viewings. The audience might see empty seats between two individuals—as in the case of airplanes—apart from the staff maintaining hygiene and being tested regularly.

Because all said and done, as Suntook says, “While virtual entertainment has helped people remain connected to the arts and artistes they admire in these times, there is no substitute for experiencing a live performance, which has always had a dedicated audience.”