Has Tapad Cracked the Code of Cross-Device Advertising?

Advertisers love Tapad because it can track and target you across your desktop, tablet and smartphone. Privacy advocates and Congress? Not so much 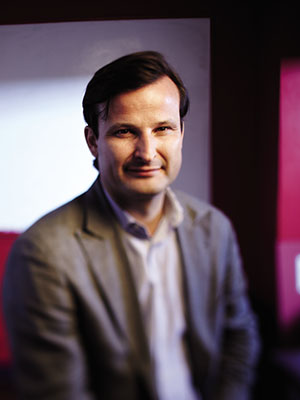 Tapad is having a growth spurt. From a modest corner office, the digital advertising startup has encroached on the entire 20th ﬂoor of a building in Manhattan’s Chelsea neighbourhood—with the exception of a walled-off chunk in the centre, taken up by a lighting company. Co-founder and CEO Are (“Ah-ree”) Traasdahl needs the space: He has hired 44 people in the last year, 10 in just the last month. The squatter demands $65,000 to move. “New York real estate,” sighs Traasdahl, 40.

Growing pains are Traasdahl’s badge of honour. Thumbplay, his mobile-app store that predated the iPhone, expanded from sales of zero to $100 million in less than three years. With Tapad he’s piloting another rocket ship.

Tapad professes to solve a problem that has long plagued online advertisers: How to track and target the same consumer across multiple devices—desktop computers, smartphones and tablets. Such ‘retargeting’ is easy to pull off on a desktop. Just add cookies—bits of code that tag visitors—to a website and advertisers can follow prospects with pitches as they circumnavigate the web. Visit a website that sells cutlery and you might be stalked by ads for knives and forks. Because such ads show only to those who’ve visited a brand’s website, they boast a click-through rate of up to three times that of banner ads, says AdRoll, a San Francisco retargeting company.

But cookies can track on only one device. The trail goes cold when you leave a desktop and use a phone. Digitally agnostic users can switch screens 27 times in an hour, says a recent study, leaving marketers in the dark. Using algorithms, Traasdahl says he can show them the light.

Today Tapad has 160 clients, including Audi, American Airlines and TurboTax, serving 2 billion ads each month across 18,000 online publishers. With $1.2 million in sales in 2011 and $8.2 million last year, Tapad should notch a small proﬁt on $25 million in 2013. An imposing roster of digital advertising vets—including AppNexus CEO Brian O’Kelley and former DoubleClick CEO David Rosenblatt—have invested $8.3 million, along with venture funds like FirstMark Capital and Avalon Ventures.

They have had a slightly scary ride. Tapad muscled through a year of failed sales meetings. Its burgeoning success risks irking Congress, regulators and privacy advocates.

Traasdahl grew up in a small town near Trondheim, Norway, 250 miles north of Oslo. An only child—his father taught high school English and his mother physical education—he showed an early affinity for moneymaking. At age 8 he used Legos to attach a motorised lock to the door of his room, requiring entrants to insert a krone (14 cents) if they wanted in. “It was a 100 percent margin business,” Traasdahl smiles. He gave up when his mother stopped collecting his laundry.

In high school he covered soccer games for a national newspaper. He sold his own help desk software to local businesses while attending the Norwegian University for Science & Technology in Trondheim. After a brief stint consulting, he joined an Oslo startup that ran text-based voting campaigns for TV shows. When it sold to Telenor, the Norwegian telecom giant, he moved to New York City in 2003 to start a US unit.

The entrepreneurial virus ﬂared again. Leaving Telenor in 2004, he launched Thumbplay, an early app store that sold music, ringtones, games and videos on mobile phones. Working in a windowless office in Midtown, he and a co-founder put in 100-hour weeks for a year, striking licensing deals with record labels and carriers.

Customers were slow to catch on. As his cash ran dry, Traasdahl dumped his last $90,000 into online banner ads on popular sites like MySpace and Metro Lyrics. Customers jumped—and spent big money on Thumbplay’s library of content. For every $5 spent acquiring a user, Thumbplay gained $30 in revenue. That helped land $7.5 million from SoftBank Capital.

The company surged, raising another $42 million in venture funds. Exhausted, Traasdahl gave up as CEO in 2008 to spend time in Florida with his wife and newborn son. Hit hard by the rise of iOS and Android, Thumbplay saw its meteoric streak fade. The company sold to Clear Channel for less than what investors had put in.

Traasdahl found his next venture at the Consumer Electronics Show, where he saw 100-inch internet-connected TVs alongside 12-inch laptops and 3-inch smartphones. Folks were using all three—but advertisers couldn’t shadow them.

Within days Traasdahl and a team of ﬁve, including co-founder and CTO Dag Liodden, were honing algorithms to track consumers across different devices. By crunching 150 billion data points—from cookies, cellphone IDs (which link individual phones to app downloads and web browsing), wi-fi connections, website registrations, browsing history and other inputs that Traasdahl won’t divulge—Tapad looks for commonalities that link one device with another.

If a tablet and a laptop share the same Wi-Fi network, for example, that’s a positive sign. So are browsing patterns—say, two devices share a history of visiting sports websites. Each correlation nudges higher the likelihood that the same person owns both devices. Based on those probabilities, Tapad clients serve potential customers a barrage of ads across platforms. A target might see one ad on a work computer, another on the mobile web on the commute home and a third while sitting with a tablet on the couch.

Now to ﬁnd believers. For nearly a year Traasdahl couldn’t persuade a single brand. “We said we would even pay them to run a campaign with us,” he recalls. Big problem: Agencies and marketing departments are often split into mobile, desktop and TV ad divisions. All three had to be corralled.

In August 2011 he ﬁnally heard “yes” from a US wireless network. Tapad ran a month-long campaign that increased its click-through rates by 300 percent. That let the carrier calibrate its marketing budget, since it knew which devices, used at key times, correlated with a transaction.

“This is an incredibly valuable planning tool,” says JiYoung Kim, senior vice president at Ansible, a mobile marketing agency with clients like Microsoft, J&J and Intel. She’d been sceptical: “There’s an element of black-box IP to how they do what they do, requiring a leap of faith.”

As for pricing? A $1 million deal might include $700,000 for ad-buying, with $300,000 for Tapad. Depending on results—new registrations or sales targets, say—the company may pocket more. Or it might keep its fees low to entice a bigger spend.

Success breeds scrutiny—not just from competitors like Drawbridge. “No one gave marketers the right to follow you across your devices,” says Jeff Chester, executive director of the Center for Digital Democracy in Washington, DC. The Senate Commerce Committee may force advertisers to adopt ‘Do Not Track’ technology, requiring web browsers to offer an easy opt-out.

Traasdahl protests that Tapad doesn’t collect data that can be used to pinpoint someone by name. It includes opt-out buttons in all its ads. Still Tapad has a privacy lawyer in Washington.

Meantime, it’s expanding like crazy. With sales offices in Miami, Los Angeles, Detroit, San Francisco and Chicago, Tapad is opening another outpost in London this year. Traasdahl hopes to hook Asian advertisers next year. That pesky hanger-on in New York? Still there.

Tweets by @forbesindia
How Anoop Bhaskar Led the Rise of UTI Mutual Fund
Book Wave: A Memoir of Life After the Tsunami