When the blind lead the blind, to success 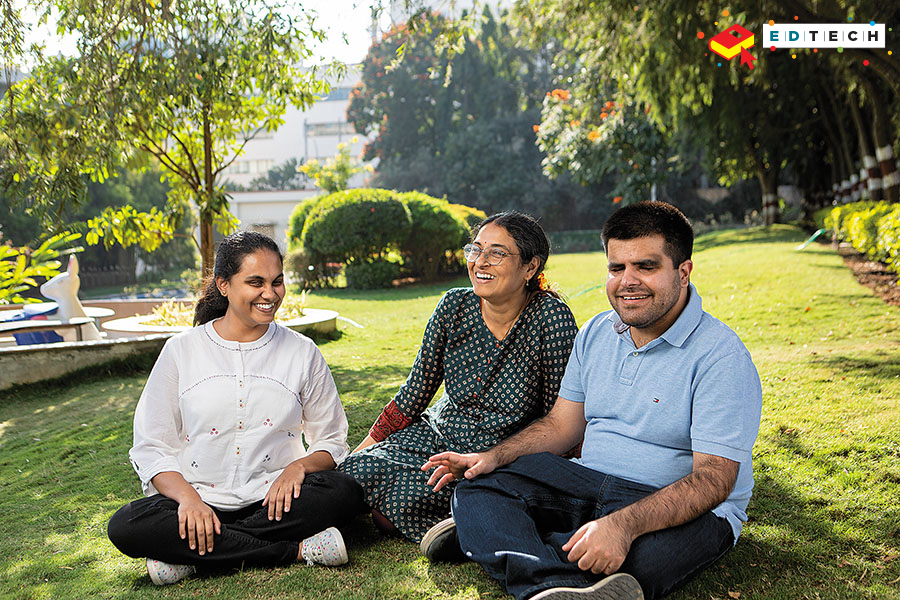 It was a moment of pride for Vidhya Y when, in 2017, the 24-year-old became the first visually impaired student to graduate from the institute with a master’s degree in Digital Society. But her happiness was short-lived. Despite being a gold medalist, no company was willing to hire her. “They would ask me things like: Do you know how to use a computer? And I would tell them that I read through a screen reader. Then the employers would not be interested in asking me any further questions,” recalls Vidhya. She decided to use this setback as an opportunity, and create jobs for others instead.

After a lot of research, Vidhya, along with Supriya Dey—an IT professional, who was doing research at IIIT-B—and Amit Prakash, a professor at the institute, realised that the problem started at the school level itself, where visually impaired children were discouraged from taking up science and mathematics because there were no means to learn these subjects.

Vidhya had to take up commerce in classes 11 and 12, though she insisted on continuing with maths. She later studied for a bachelor’s degree in computer application. “While I understood the theoretical bits of it, the problem was that most of the concepts were being taught on the drawing board. The teaching method for science was also entirely dependent on diagrams, and I couldn’t grasp those,” she says. Hence, she had to put in a lot of effort to find external help.

“The crux of the problem,” says Dey, “has two parts to it. The first is that visually impaired students are not being taught maths and science beyond class 7 because there is no accessible content available. The second problem is that teachers in schools for the blind are visually impaired themselves and have never studied these subjects.”

After Vidhya and Dey gathered qualitative data from government schools, Vision Empower was incubated in IIIT-B in 2017 to make maths and science subjects accessible to visually impaired schoolchildren. They decided to focus on three kinds of interventions: Providing content for schools for the blind, training teachers at these schools, and developing relevant technologies. For instance, the company provides study material in a tactile form so that students can feel the relevant objects with their hands and learn about them.

Vision Empower is supported by Microsoft India in a joint project to implement Digital Literacy and Numeracy as a prerequisite for the Computational Thinking curriculum for students with visual impairment. Vidhya is currently a Research Fellow at Microsoft Research working with Senior Researcher, Swami Manohar's team.

Vision Empower has tied up with nine schools in Karnataka, and are providing them with textbooks in Kannada and English. “While the process has been slow, we have received some great feedback, since now every child has a science and maths textbook. Earlier, if there was one book for any text, it would be with the teacher,” says Dey.

Vision Empower has also developed a compact Braille book reader that converts ebooks to Braille. “While a similar concept is available abroad, it costs between $3,000 and $5,000. For us the challenge is to make these technologies affordable for the masses,” says Dey.

Although the reader is at a prototype stage, the company is hoping to get CSR funds to help it reach the masses. Along similar technological lines, Vision Empower is working on Tactile Audio Gallery that can help users identify elements of a picture by providing a tactile feel of it along with relevant information through audio content.

While Vision Empower is focusing on making school-level education more inclusive for visually impaired children, Kartik Sawhney thought of doing it for college students. “When I went to enroll in a coaching class for the JEE exams, I was told, ‘I don’t think you’re fit to study science’,” recalls Sawhney.

This, along with many more similar experiences throughout his school life, taught him to be self-sufficient. When Sawhney graduated from Stanford University in 2017 with a degree in computer science, he decided to set up iSTEM to make science, technology, electronics and maths courses more inclusive at a university level, not just for the visually impaired but for students with all forms of disabilities. The core idea was, “why not provide institutes and businesses with a framework to support their students and employees with disabilities using technology,” he says.

Even if visually impaired students get admission into the colleges, “they probably won’t graduate, because they don’t have access to any content and ebooks, nothing at all. And it’s not that universities don’t want to help, they just don’t know how to do it,” says Sawhney.

iSTEM has created a network, of students, institutes and private corporations including Microsoft, Intel, Morgan Stanley, XRCVC, IIT Delhi, and IIT Kanpur to make university and office campuses more inclusive. For instance, it provides technologies for optical character recognition (it helps convert digital books into formats that can be read with screen readers), real-time captioning of images and videos for the hearing impaired, and a volunteer service.

Vision Empower decided to focus on providing content for schools for the blind, training teachers at the schools, and developing relevant technologies

For the last three years, iSTEM along with Vision Empower, Vision Aid, XRCVC and IIIT-B have been organising hackathons with teams that include sighted and visually impaired participants, as well as members from corporate partners. For instance, the Inclusive Stem Confluence 2020, which included a 24-hour hackathon and workshops, took place at IIIT-B in January.

“The main purpose behind this event was to make industry professionals see the abilities of people with disabilities, and engage with them. Only when this happens, will the hiring pipeline open up,” says Sawhney. “There is a dearth of talent when it comes to people with disabilities, not because they are smart, but because of the training they have received.” Since these hackathons started, the number of participants have been growing, from about 50 in 2019 to 100 this year.