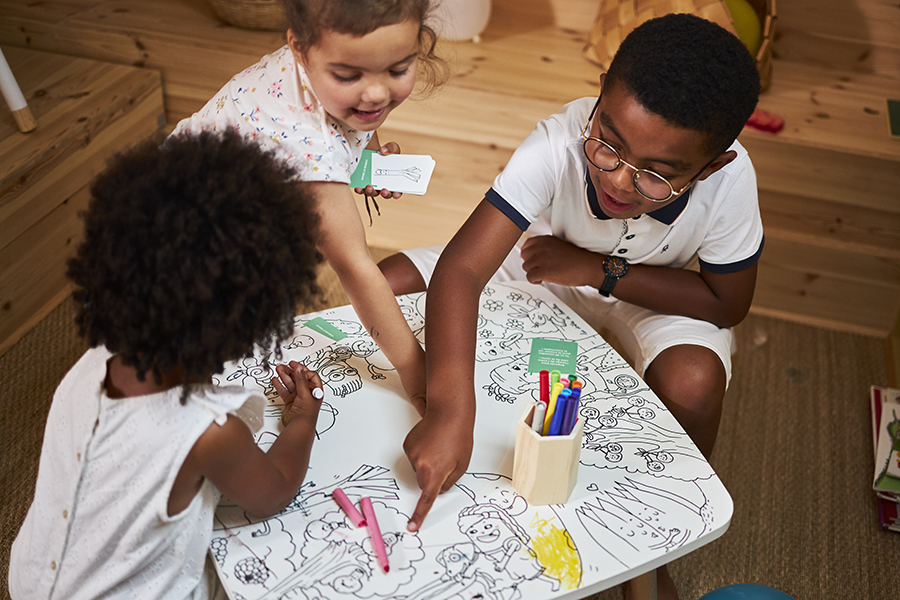 What if, instead of being considered a "no-no," children were encouraged to color on the furniture? Then erase their work with a sponge and start again? That's the concept of "Coloritable," an eco-friendly, "infinite" coloring table imagined by two entrepreneurs from Lille, France.

"Don't scribble on the table!" How many kids dream of not being reproached for going over the lines of their coloring sheet and onto the table? Imagine if they could be totally free with their pencil strokes, even on the immaculate white walls of the living room. With this new kind of coloring table, kids just might get their wish... and parents won't have to scold or scrub afterwards.

Designed by the Lille-based start-up "Les drôles de Bouilles," the "Coloritable" is available at a unit price of €99.50, measures 40 cm high and has four "usable" sides. Aimed at 2-10 year olds, it has been designed so that children can color in total freedom and indulge their creativity and autonomy, in a spirit that recalls that set out by the famous Italian educator Maria Montessori in the method that bears her name. The creators of the "Coloritable" have also worked with early childhood professionals to consolidate this educational dimension.

The coloring trays (that simply have to be put on the table) have been designed around the universe of several characters: Nico the ecologist, Bree the wildlife protector, Jamy the scientist and Zack, their faithful little dog.

"We created amusing characters that children can identify with, to accompany them. We imagined three buddies to evolve alongside them, awaken their curiosity and stimulate their imagination," explains Martin Duretz, co-founder of Les drôles de Bouilles, in a release.

"Marine Carron, the illustrator who gave life to these "funny bouilles" and to the different universes, imagined a line adapted to different reading levels according to the age of the children," adds co-founder Thibault Bale.

And if your child suddenly gets bored with their work, no worries there either. A simple wipe down and the table will be as good as new... As long as you follow the instructions and use water-based markers!

In addition to its playful and educational aspect, this coloring table also has the advantage of being eco-friendly, since it is made of wood from sustainable forests and materials produced exclusively within the European Union. The tables are designed in France and produced in Portugal. All of this is delivered in recycled cardboard packaging.

The project also has a charitable dimension: for every 50 tables sold, a "Coloritable" is donated to a children's hospital.