Travel: In Dubrovnik, Croatia, where the walls tell tales

The Walls of Dubrovnik in Croatia are an example of the old world's need for, and fascination with, stone fortifications 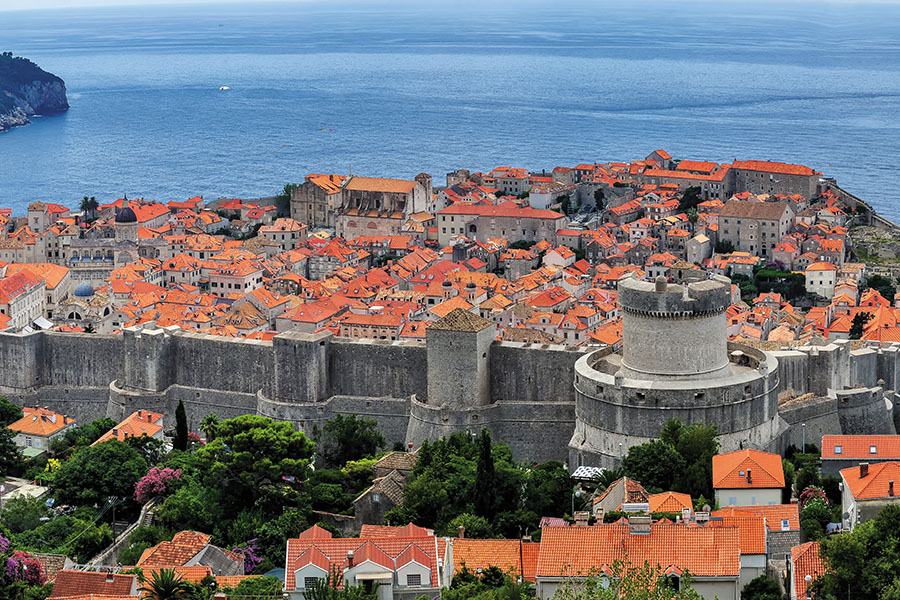 The walls in Dubrovnik go on for almost 2 km around the old town. They rise up 80 feet from the ground.
Image: Karl Allen Lugmayer / Shutterstock

Ever since the world discovered Dubrovnik, things have not been the same for this beach destination on the Dalmatian coast, fondly known as the ‘Pearl of the Adriatic’. Or for Croatia, for that matter. And then came Game of Thrones. Things only got more frenzied, with fans of the immensely popular television series thronging its narrow cobblestoned lanes in search of their favourite filming locations, and specialised guided tours mushrooming almost overnight across town. On any good day in high tourist season, it is almost impossible to find a quiet spot inside the old town or walk into a restaurant for dinner without prior reservation. If tourists who drive up or fly down to Dubrovnik are not enough, over 800,000 cruisers hop off at the port every year for a day’s worth of wander.  None of this is to say that I dislike this pretty town in the southern tip of Croatia, located nearly 600 km from the capital city of Zagreb and washed by the blues and greens of the Adriatic Sea. Dubrovnik’s fame and status as a Unesco World Heritage Site are utterly justified. We are in Dubrovnik just after the madness of the summer months has somewhat subsided, and we have the luxury of sitting in silence by the harbour late at night, with a view of the city’s night lights and in the company of cats that strut around like they own the city.

Despite the rich history of the region, Dubrovnik’s museums are fairly uninspiring. However, the War Photo Limited gallery—a permanent space showcasing the devastating 1990s war in Yugoslavia—is a sucker punch to the soul, with compelling images of the horror and futility of war. We stroll along the Stradun, the pedestrianised promenade (officially called Placa)—it is lined with lively cafés and pubs, new souvenir shops and old churches—that cuts through the heart of the old town. But what I have looked forward to the most are the walks along the city walls. And so early one morning, we line up for tickets to the Dubrovnik City Walls—locally called ‘Dubrovački miri’—and find ourselves at the lower Pile Gate (pronounced Pile-uh), one of the main entrances to the walled city, complete with drawbridge and padlocks. It is one of the three spots from which to begin the walk, and after taking some local advice, we get there when it just opens for the day. 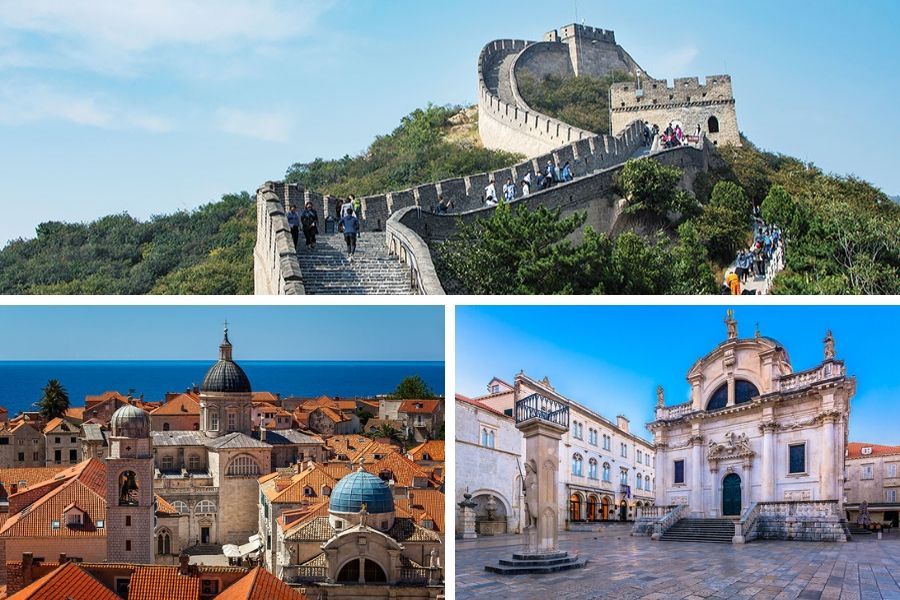 The Great Wall of China receives more than 10 million tourists every year; the Stradun promenade is lined with old churches; view during walks along the walls
Image: Shutterstock

Dubrovnik’s protective ramparts have been destroyed and repaired many times since they were first built in the 9th century. What exists today are from the 15th century, when they were finally reinforced to guard what was then called the Republic of Ragusa. By then, Ragusa was free from Venetian rule, but faced the threat of invasions from the Ottoman Turks. The walls go on for almost 2 km around the old town, and include a complex of watchtowers and citadels looking out on to the sea, from where pillaging pirates too posed a threat. The walls rise up 80 feet from the ground, with a width of 5 to 10 feet on top, and getting there involves climbing a series of steep steps. This is only the beginning, since the walls have more than 1,000 steps going up and down throughout its length. People are only allowed to walk in the counter-clockwise direction, which means there is no shoving or squeezing past anywhere on the trail. Once I recover from the initial bout of huffing and puffing, I can see why this is the recommended starting point. The Stradun stretches out in front of us, with the bulbous Onofrio fountain right below. Before the walk, we had filled our bottles with cool drinking water from this fountain, built in 1438 to mark the end of the aqueduct network. Moments later, I can spot the Lovrijenac fortress occupying a small island nearby. Also known as St Lawrence Fortress, or as the Gibraltar of Croatia, this fortress was built in the 11th century on a rock, to prevent the Venetians from using it as a vantage point in their plan to conquer the city again. This citadel on the sea is now open to visitors who want to view the spectacle of the old City Walls from a distance and not just walk on them, and also hosts the annual Dubrovnik Summer Festival. https://www.forbesindia.com/article/forbes-lifes/winter-is-coming-game-of-thrones-lives-on-in-northern-ireland/55793/1 Throughout the world, and through the ages, expansive stretches of walls have been used as strategic means of fortification and defence. One of the oldest such examples is the Unesco World Heritage Site of the Dún Aonghasa ruins on the Aran Islands in Ireland, dating back to about 700 BC. While many great cities from Jerusalem to New York have been walled at some stage of their history, it is the Great Wall of China that is undoubtedly the superstar of city fortifications. 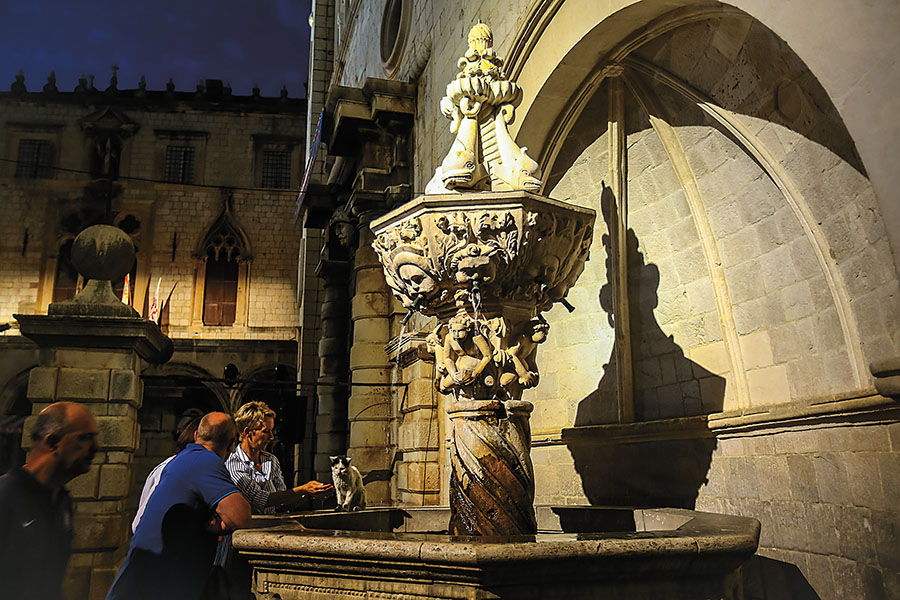 The Onofrio fountain which was built in 1438

Said to be one of the greatest man-made structures ever, the Great Wall is actually a series of numerous walls running contiguous or even parallel to each other, and was built through the course of 2 millennia across northern China. To this date, there are conflicting estimates about its length, varying from 2,400 km to 21,000 km (although contrary to urban legend, it cannot be seen from the moon). Although it is believed to have been first built more than 2,000 years ago, roughly in 221 CC, the version that exists today is from 1368-1644, the time of the Ming Dynasty. It crests over hills and encompasses rivers, with moats and ditches for additional safety. More than 10 million tourists tramp up and down these fragile walls every year, most of them in the popular Badaling section. The Great Wall may have been a symbol of the might and grandeur of Chinese emperors, but the one in Dubrovnik was meant only to keep outsiders away. Along the 2 km stretch, there are three more bastions, with the Minceta tower at the highest point and overlooking the town, Fort St John, Fort Revelin and Fort Bokar and guarding the open sea and harbour. All through the undulating, curving line of the City Walls, the dazzling views of the Adriatic Sea are a constant companion. There are a few cafés along the way, and after 45 minutes of the walk, with over an hour to go, we stop at one of them for a refreshing glass of orange juice. 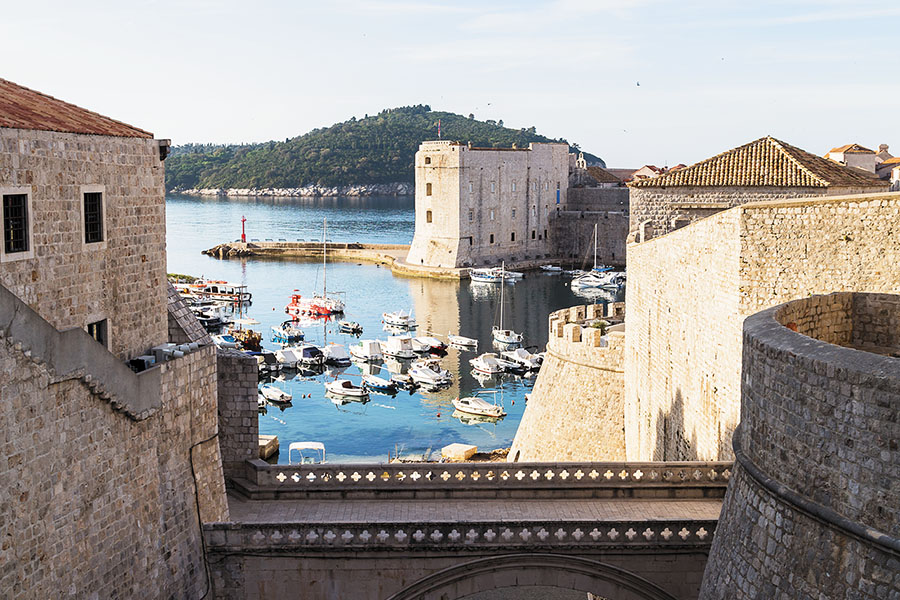 View of the Adriatic Sea

Incidentally, orange—the colour, not the fruit—is another recurring theme on this walk. Once we get inland, the sea continues to shimmer at a distance, but the primary vista is that of the terracotta tiles of roofs in the old town. Known as Kupe Kanalice—from their original hometown of Kupari in Croatia—these handmade clay tiles have been traditionally used since the Middle Ages. During the 1990s’ war that tore Yugoslavia asunder, Dubrovnik was bombed by the Yugoslavian People’s Army in 1991, destroying more than 400 buildings in the old city. Later, the Institute for the Restoration of Dubrovnik assessed the damage and helped rebuild them. The modern technique used to make these tiles gives them a bright and uniform orange colour, which stands out in the midst of the older and fading terracotta roofs of varying colours as yet another poignant reminder of the war. By the time we walk around towards the Minceta Tower, close to the end of the trail, the sun is blazing down and we are glad to have caught a cool hour on these bare stones. The Croatian flag is fluttering in the wind from the top of this fort, but we are sweating and sore; there is only so much wall that I can take, even if it comes with picture postcard views. Back on the limestone street of Stradun, we cool off with more water from the Onofrio fountain before heading on for an early lunch. Later, much later in the evening, mildly rejuvenated from a long nap, we drive up to the top of Srđ hill to catch the sunset along with dozens of other tourists who have likely taken the cable car up. As the sun begins to descend on the Adriatic, painting the sky orange and pink, the lights in Dubrovnik’s old town begin to twinkle. I can see small boats bobbing up and down at the harbour, while Lokrum island, a popular day trip destination goes dark. I trace the white line of Dubrovnik’s City Walls, once again admiring how they have withstood the test of time and tide.

Tweets by @forbes_india
Squadcast: A SaaS startup that keeps IT systems up and running
The huge investment opportunity in Edtech