Jemimah Rodrigues, 22 and a frontline batter for the Indian cricket team, on humility and how to handle success at a young age 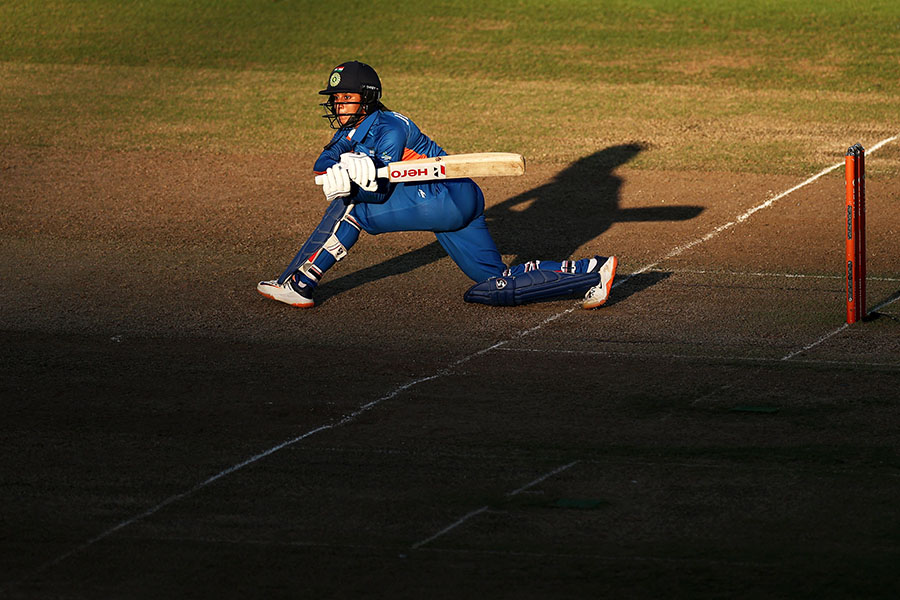 (File) Jemimah Rodrigues of Team India plays a shot during the Cricket T20 - Gold Medal match between Team Australia and Team India on day ten of the Birmingham 2022 Commonwealth Games at Edgbaston on August 07, 2022 on the Birmingham, England. Image: Ryan Pierse/Getty Images

Q. When you were young, you used to play both cricket and hockey. When did you pick the former?
Growing up, I was really good at both cricket and hockey. There were days I would go to the hockey ground in the morning, finish my match, change, have a little lunch my mum made, and go on to the cricket ground. But once I started touring with the cricket team, the schedules for both sports were clashing, and I had to make a choice because it was difficult to adjust. My dad made me sit down one day and told me, "It's your choice, and we'll back you no matter what." Since I reached a higher level in cricket than hockey—playing the inter-zonal as opposed to the state level in hockey—I went ahead with cricket. It was a difficult decision for an 11-year-old, as I loved both sports. But, turns out, it wasn’t a bad decision after all.

Q. Who were your mentors and role models in those early years, and what were some of the key lessons that you learnt from them?

I think my mentors would be my mum and dad only. My father is still my coach, and he has been working on my skills from my childhood till now. There’s one thing that the two of them taught me while growing up. They tell me that no matter what level you reach, it’s not just you who got you there. First, it’s god, because he has given you the talent and the grace to do it, and then it’s the people he has used around you. There have been so many people who have come across my path to help me who I am today. I can’t take credit for my achievements. This lesson has stayed with me forever and helped me stay humble.

Q. In your early years, when women’s cricket wasn’t popular, what were some of the challenges you faced, and how did you overcome them?
Growing up, I never knew women’s cricket existed. I used to play purely for the love of the sport. My dad was my coach, but, at one point, he said, 'how long can I give her throwdowns, she needs to know what a proper net session is, only then will she get better'. But at that time, it was difficult for me to get into academies—I had gone with my brothers to an academy, but they rejected me because, first, I was a girl and, second, I was tiny. That hurt me a lot because till then, I didn’t know you had to be a boy to play cricket. A few months later, I had gone to watch my brothers play a school game. That’s when their coach said there would be a girls’ selection at Shivaji Park. I immediately went back home to Bandra, got ready, and my dad, holding my kitbag in one hand and me in the other, took me to Shivaji Park. When people saw me, they started laughing because I was an 8-year-old among 24- and 25-year-olds. But I did extremely well and got selected. At that time, there was a boys’ under-10 tournament at the same club, and the coach asked me to play for the team. In the semis, I played against the club that had earlier rejected me and I did really well. And ever since I have been part of their under-12 team.

Q. You debuted for the national team at 17, and at 22, have played and scored runs all over the world. When someone has success at such a young age, how does s/he stay rooted to the ground?
It’s a journey. There was a point no one followed women’s cricket, but now it’s in the limelight. But I always go back to what my mum and dad taught me when I was young, that it’s not me, but a multitude of factors and people around me who have helped me achieve whatever success I’ve had. At the same time, I know there’s a lot more to achieve, both for women’s cricket in India as well as for me personally. We still have to win many more World Cups. The journey has just begun.

Q. Playing international sports is as much about the body as about the mind. How do you build mental resilience?
Life makes you mentally resilient. I’ve had a lot of highs but an equal number of lows. Credit goes to those low moments that make you so strong. You become stronger after every fall. I once listened to a podcast where someone said, “Maturity isn’t someone who never falls or makes a mistake. Maturity is someone who knows how to pick themselves up after a fall.”

I was dropped from the ODI World Cup team earlier last year. It was an eye-opener for me. It changed the way I practised. I put myself in challenging situations during my practice. For example, I started batting on difficult pitches, where the pitch was damp or the ball was turning square. When you do well under such difficult conditions, it gives you the confidence to do well in international matches, where the wickets were better. If I hadn’t been dropped, I wouldn’t have done that. That setback made me stronger and better. When you have that approach, you will find ways of getting out of tough situations. When your back is against the wall, you go back to the basics and prepare really hard. It’s during these times that the focus also changes—you realise the result is not in your hands but preparing well is.

Also, I surrounded myself with the right people that helped me stay sane. There were times I felt low and dejected. At those times, it’s nice to know you have friends and family who believe in you.

Also read: Virat Kohli Is One Of The Best Cricketers On Earth. He's Great For Cricket: Brett Lee

Q. You’ve played under a few captains till now. What are some of the leadership lessons that you’ve learnt from them?
All the captains that I’ve played under are unique in their own ways. Mithali Raj is very calm, Harmanpreet Kaur is exactly the opposite—she’s aggressive, and she gets the best results when she is so. Smriti Mandhana has a bit of both. If there is one thing I’ve learnt from all of them is that everyone has their own style of leadership. When you back that, you get the best results. Often, there is a tendency that if we see a really good leader, we tend to follow them and repeat their methods. But that shouldn’t be the case. If you’ve been given the role of a leader, do what you do best. Find that style of yours and bring it to the table.