As companies adopt enterprise collaboration platforms, experts feel the now-ubiquitous mode of communication will need to have a refined version 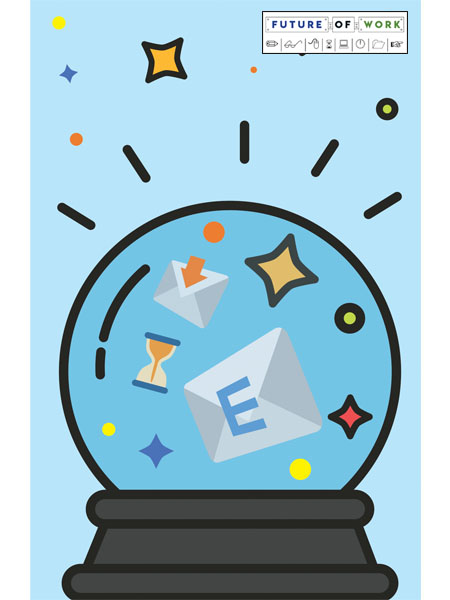 Image: Shutterstock
Like many scientific and technological firsts, the beginnings of the now-ubiquitous email is one that is mired in claims and controversies. Computer engineer Ray Tomlinson is widely believed to have sent an electronic message from one computer to another perched next to it at the Massachusetts Institute of Technology in 1971, and introduced the ‘@’ symbol as part of email id. Shiva Ayyadurai, an India-born American scientist and entrepreneur, on the other hand, claims he created the email in 1978 for the University of Medicine and Dentistry of New Jersey while attending a summer programme there; he was 14. Ayyadurai received a copyright in 1982, the year the word became a part of the English language.

Although the jury may still be out on who is the rightful claimant, what is certain is the widespread adoption of the email over the following decades, and the way in which it has revolutionised the way we work. “Twenty-five years ago, email disrupted the way we worked and communicated by bringing with it, unimaginable changes, allowing us to work remotely, communicate freely, and bringing down costs exponentially,” says Mitch Young, vice president and general manager, Asia-Pacific-Japan, ServiceNow.

But in 25 years, it has also become one of the most misused enterprise technologies, he adds. Originally meant to replace static messages that could be left on the same computer, “email is being deployed for purposes it was never designed or intended for—to get things done, share and collaborate, and as a communication tool”.

Last year, 269 billion emails were sent across the globe every day; the number is likely to increase to over 333 billion by 2022, according to Statistica. In 2012, a McKinsey report said, average employees spent about 28 percent of their time a week managing email. A 2015 ServiceNow research raised it to 40 percent. That amounts to 104 work days in a year.

Less is more
French information technology company Atos Origin started the digital well-being movement in the late 2000s when an internal study found that only 15 percent of emails received by employees every day were important. In 2011, it announced an initiative to become a zero-email company, and in 2012 launched Zen, an enterprise social network collaboration platform on which they could chat, contact their counterparts in other markets and collaborate on projects. By 2016, it had cut emails by about 60 percent. “The email scourge is driven by poor communication, misunderstood requirements, competing priorities and unrealistic deadlines,” says Rohit Talwar, CEO of Fast Company, a professional foresight firm.

Could fewer emails get more work done? Kleiner Perkins’ 2018 Internet Trends report found that popular enterprise collaboration platform Slack cut email usage by 32 percent in organisations, reduced the number of meetings by 23 percent, improved the time-to-market for development teams by 23 percent and led to a 10 percent increase in employee satisfaction. Slack is used by about 5 lakh organisations around the world, with 70,000 paying for its services.

The changing nature of companies, as they open up to the gig economy, work-from-home options, flexi-timing and the rise of millennials in the workforce, are also calling for newer and more efficient ways to collaborate. Young believes that as “millennials hit the workforce, they will become a force for change and demand a better way of doing things, a way that they are used to in their home lives”.

What’s the alternative?
Moushumee Basu Roy, head of SAP SuccessFactors India at SAP India, emphasises the importance of ‘team workspaces’ where “all conversations, files, and tasks are automatically stored and updated, creating an easy-to-use repository for all future references”.

Some of the major players in this market are Facebook, Microsoft Corporation, IBM Corporation, Slack Technologies, Atlassian Corporation, Salesforce.com, and Jive Software. In 2018, the global enterprise collaboration market is likely to be worth $34.57 billion, growing to $59.86 billion in 2023, according to Markets and Markets, a US-based B2B research firm.

In India, several companies have adopted such platforms to cut email usage. In the 10 companies in the startup, public relations and fintech sectors that Forbes India spoke to, Slack, Facebook Workplace (FW), Microsoft Teams and WhatsApp were the most commonly used platforms.

India is among the top five markets for Facebook Workplace, with 800 Indian companies using it in 2017. “Facebook at work is a known devil. For a global organisation like ours, new business opportunity traverses markets. Simply posting a requirement on FW allows our global workforce to jump in with ideas,” says Arpana Ahuja, executive vice president, strategy and market development, Weber Shandwick India. “That is not to say it cuts out the need for email. We need it to connect the dots with clients, and there is some daily communication that happens on email.” Globally, 30,000 organisations use FW.

San Francisco and Mumbai headquartered Flock claims to be different from US-based global bigwig and direct rival Slack. Created by Bhavin Turakhia, Flock aims to differentiate itself by being user friendly. “Slack was built as a messenger for the engineering department [of the game development company, Tiny Speck, renamed Slack Technologies] and so it’s designed for a tech-savvy audience,” says Ninad Raval, vice president, product and design. Flock provides 200 productivity application integrations, while Slack provides 1,500.

As of September 2017, five years after it was launched, Slack claimed to have 6 million daily active users. Flock, which started in 2014, has 135,000 weekly active users and adds 8,000 new teams every month; it includes clients such as Starbucks, Victorinox, Accenture, and Princeton University.

Most enterprise collaboration platforms have free and premium tiers, where about 50 to 60 percent functionalities are free. Flock was completely free so far, but it will soon roll out a paid model. Microsoft’s collaboration software offering, Teams, recently started a free version to compete with Slack.

“In the next decade, these tools will evolve and become far more ubiquitous. Then, as humans get replaced by machines, and focus more on creative tasks, newer group productivity tools will also start to emerge that have far more seamless connectivity between constantly changing business applications, workflow management, and the team’s communication requirements,” says Talwar.

Crystal ball gazing
Talwar predicts the virtual personal assistant, which adapts to user requirements, will play a big role in information management and delivery in the future. “Computing may disappear from our environment, and we will command everything by voice, gesture and thought control,” he says. 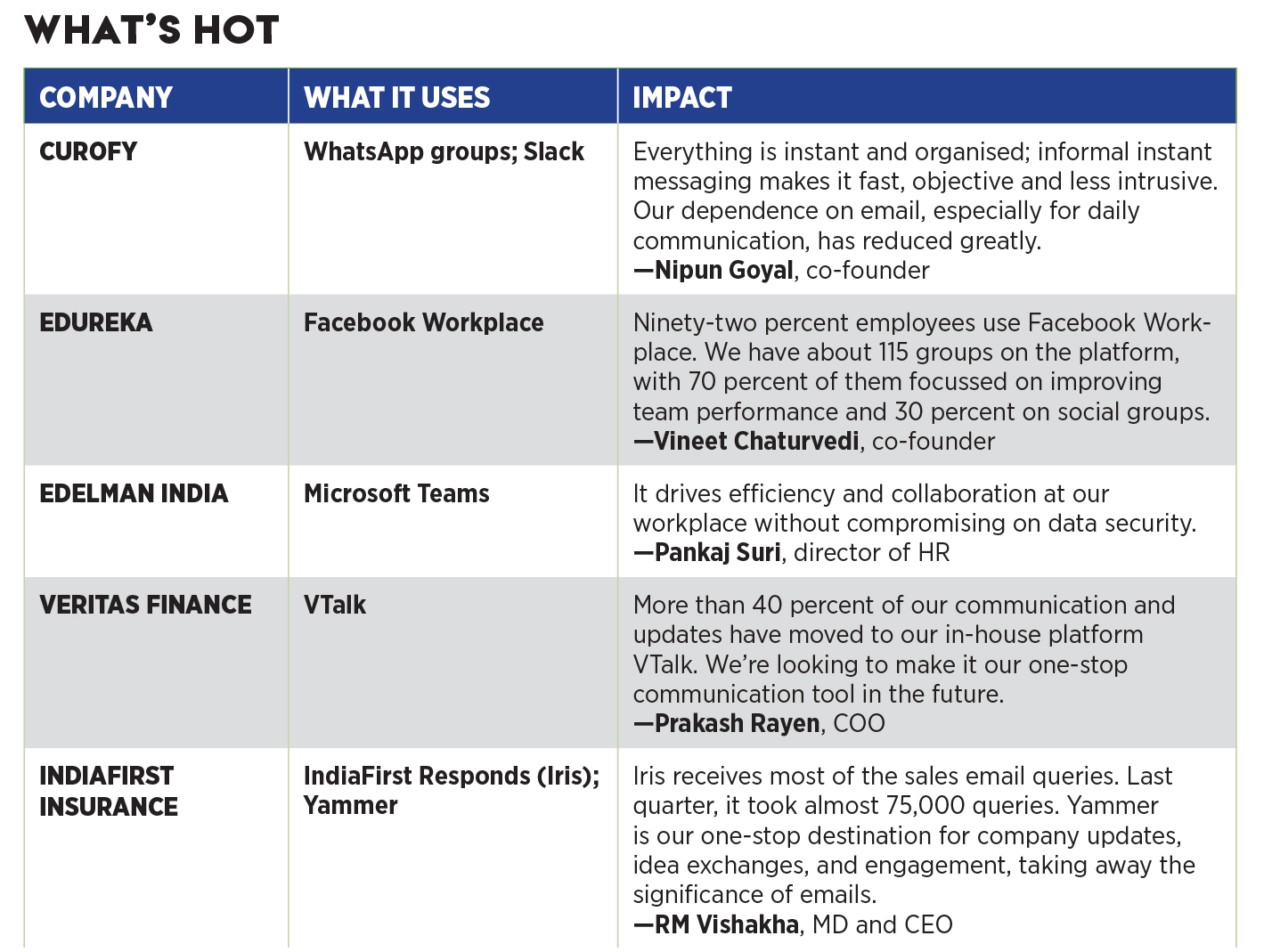 According to Krishnamurthy Shankar, executive vice president and group head, Human Resource Development, Infosys, 50 percent of all email is follow-up and reminders, and a virtual workbench will take care of that. “Artificial Intelligence (AI) and reminder bots will give you a status update on the progress of the tasks allotted and do away with a cluster of emails,” he adds. A virtual workbench would allow people to work together, and tap into the activity of other teams.

“In the future, workflows will be automated. Cloud-based platforms enabling intelligent automation, smart machines and AI will remove busy-work [mundane, repetitive work] and free up employees to do higher value work,” says Young of ServiceNow. “I don’t believe there’s a ‘silver bullet’—one killer app that will replace how we use email in its entirety. I believe it will be a combination of things that can be integrated and adapted for best use, on a single system of record.”

“Enterprise collaboration platforms should serve as hubs or connectors, bringing together the digital workplace. This approach offers best-in-class collaboration apps for most common needs, but allows users to bring in their own apps, as long as they meet some minimum pre-defined requirements [of security and data backup],” says Basu Roy.

Industry insiders feel the email may morph into a more refined version of its current self. “Automated workflow management capabilities, conversational emails written by chat bots and information dissemination emails read out by bots, the concept of ‘pay per use email’ are what the future of email could look like,” Basu Roy says.

Talwar says the biggest contributor to the death of email will not be a specific technology. Instead, he adds, its use will dwindle thanks to better training in communication, collaboration, project working, dispute resolution, problem solving, scenario thinking, and accelerated learning in the future.

But Rajendran Dandapani, business solutions evangelist at Zoho Corporation, remains bullish. “I have a strong feeling that emails will have the last laugh. Like a cockroach, detestable as an analogy it might be, emails seem to have the perfect mix of capabilities and limitations to withstand a complete nuclear fallout. They will survive, and thrive. They will remain the glue between a vendor and consumer, between disparate companies using various tool stacks, and between customers and service providers. It will evolve, surely.”