Arriving in perfect shape is critical for the young Olympian 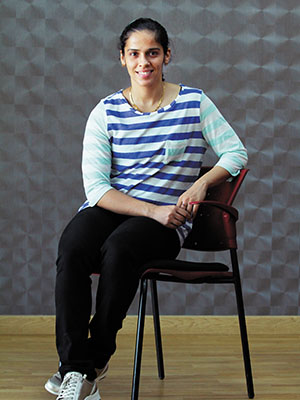 The human body isn’t equipped to handle some of the stresses and strains that travel puts it through: The lower pressure inside airplanes, cramped seats (and sitting for long periods) and quick adjustments to different temperatures, languages, cultures, cuisines, customs—oh, and did we mention messed up body clocks?

No, it isn’t easy being a global citizen.

Just how tough is it, and how does one cope with it? Forbes India asked Saina Nehwal who plays high-pressure, competitive badminton the world over. Arriving in top shape is critical for her. How does she get to her destinations razor-sharp and alert? She shares some helpful insights.

The organisers of the 2004 junior national championships in Goa are unlikely to forget one particular 14-year-old for a long time. Not just because she showed on court why she’d become India’s pre-eminent shuttler in the decade to come; it was also because she had them worried sick off it. Having flown in from South Korea, Saina Nehwal, then a rising star of Indian badminton, went AWOL right after landing at Dabolim airport at 11 am.

When she finally emerged after five hours, Nehwal revealed where she had been: In bed, sleeping. And that’s been the world No. 7’s routine for years now, as she frequently shuttles between countries, continents and time zones. This is how she shakes off her travel stupor.

“If I’m playing abroad, I normally reach the city two days before the first match. The minute I reach, I am off to sleep for at least three to four hours,” says Nehwal, who played nine international tournaments in an injury-marred 2013. Once refreshed, she starts off with some light exercises. It’s only on the next day that she puts her body through the entire cycle of training. This regime of rest and incremental rigour helps the 24-year-old control an out-of-sync body clock and ensure that the stress of long flights doesn’t get the better of her agility.

Nehwal goes back to 2006 to emphasise just how important this recovery routine is. The morning after she won the Philippines Open, she was off to play in the Indonesian Open. The journey from Manila to Jakarta was a tedious route via Singapore. Once she reached her destination, Nehwal went to the venue directly and played her first match. “I lost to a newcomer despite winning a tournament the day before,” she says.

In a schedule where matches and travel run in loop, Nehwal’s laptop is a permanent fixture in her backpack (where books—she likes short stories and comics—and movie DVDs also jostle for space). Sometimes, she logs on to YouTube to check out her opponents the night before a game. On other occasions, particularly during  layoffs and long flights, she plays a few rounds of Fruit Ninja before sinking into her seat and plugging into music.

Not all journeys end in a breeze, such as the ones at Singapore’s Changi airport. Reaching Odense to play in the Denmark Open has often been far more challenging than beating top players at the tournament. “We travel from Copenhagen to Odense by train, but have to wait at the airport for a few hours. There are hardly any facilities beyond the lounges and the weather is harsh even within,” says Nehwal.

Despite such complaints, she manages to keep her focus on the job. “Yes, travel stresses us out, but, in the end, we have to forget about the rigour,” she says. For a champion like her, it’s all about being match-ready in the mind.