Barcelona is the only major city in Europe to have forbidden short-term private room rentals, even as it continues to allow the renting of entire apartments, so long as the owner of the property holds the appropriate license 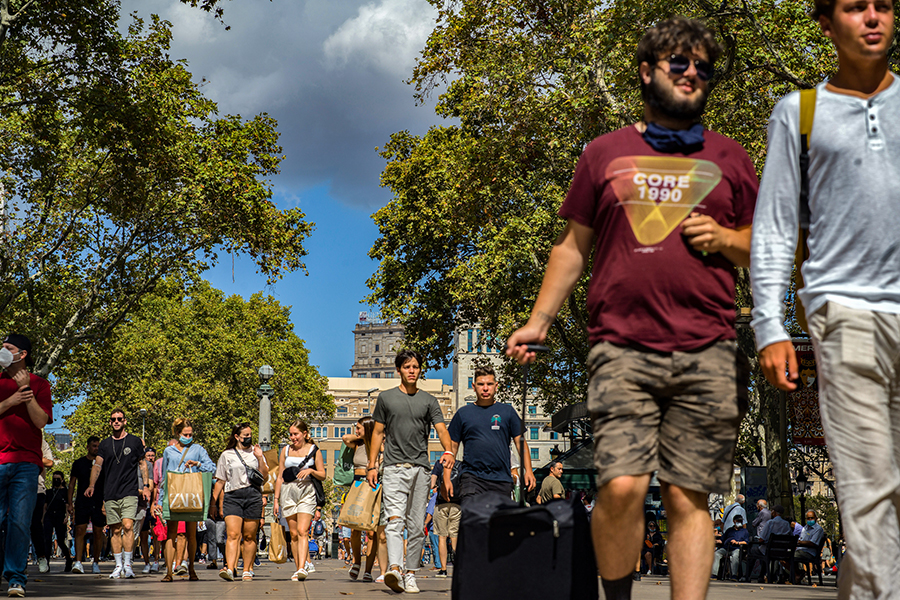 Tourists stroll along Las Ramblas, the popular street in the heart of Barcelona, on Sept. 17, 2021. A new rule prohibiting short-term private room rentals is taking a significant proportion of home-sharing options off the market. Image: Samuel Aranda/The New York Times

It has been a busy summer for Lucas Ezequiel Hernández, a 29-year-old designer who lives with his brother in central Barcelona. In June, he listed the extra bedroom in their apartment on Airbnb, and for more than two months, hosted a steady stream of tourists at a rate of 40 euros (about $47) per night. But by the end of August, a couple of weeks after a new ban on short-term, private-room rentals had taken effect, he was reconsidering his options. “I think I’m going to cancel the reservations that I have,” said Hernández, who added that he had used his rental earnings to help fund the launch of his fashion brand. “I can get problems by renting on Airbnb, so I think I’m not going to do it anymore.” The ban, which took effect Aug. 6, sets Barcelona apart as the only major city in Europe to have forbidden short-term private room rentals, even as it continues to allow the renting of entire apartments — so long as the owner of the property holds the appropriate license. The new rule has added fuel to Barcelona’s already heated debate over how to support the local economy and safeguard residents’ quality of life following the rapid growth in tourism in the decade before the pandemic hit. Critics maintain that the crackdown on accommodations has resulted in unjustifiably heavy fines for hosts and cut out an important source of income for many residents. But the city government says that restricting private tourist accommodation is one of the few effective tools that it can deploy to rein in excessive tourism and address the city’s housing problems.

“We are very happy that people come to Barcelona and enjoy Barcelona because we love our city and we want to share it — but we need rules and we need balance,” said Janet Sanz, Barcelona’s deputy mayor and the driving force behind the crackdown. “People in Barcelona can still rent out a room for a year to a student coming from abroad,” she added. “But for less than 31 days, it’s such a tricky market to regulate that, from now on, we have to stop it.” Airbnb maintained that its rentals do no harm to the city, and that half of its hosts in Barcelona rely on the income to pay their bills and stay in their homes. “In Barcelona, the absence of clear rules for hosts who share a room in their home has no impact on our business, but we are concerned about the negative impacts of City Hall’s proposals on local families,” said Patrick Robinson, Airbnb’s head of policy for Europe, the Middle East and Africa. “We are confident that we can work with the authorities on a better way forward.”

The beginnings of a problem

When Airbnb arrived in 2009, Barcelona had no specific regulations governing private rentals to tourists, but interest in the service was evident: By the middle of 2016, there were some 20,000 listings of both private rooms and entire apartments in Airbnb’s Barcelona section, according to data from Inside Airbnb, which tracks listings in cities around the world. The hosts in Barcelona were operating in a kind of “gray market” in those early years of growth: It was not explicitly legal, nor was it clearly forbidden. But as tourist numbers grew, so, too, did the sense among many in Barcelona that the city was nearing its capacity for visitors. In the summer of 2014, anti-tourism protests erupted in the Barceloneta neighborhood, where locals had grown frustrated with the noise and raucous behavior of visitors who had come to party. Anti-tourism graffiti sprouted up, sometimes in popular tourist spots, and in 2017, a group of left-wing activists vandalized an open-top bus filled with tourists. Many residents — as well as some at City Hall — pointed the finger at Airbnb. Airbnb maintains that private room rentals have little to no effect on the availability of local housing, as people who rent out private rooms live in the same property. But a study published last year in the Journal of Urban Economics found that Airbnb activity in Barcelona has increased rents by 7% and housing prices by 17% in the neighborhoods that have the highest levels of activity on the platform. In the average neighborhood, the effects were a 1.9% increase in rent and a 4.6% increase in housing price.

Robinson of Airbnb said that the company has cooperated with the city in regulating the activity on its platform. He added that Airbnb requires hosts to agree to allow certain personal details — including their name, address and national identification number — to be shared with authorities, and said that more than 7,000 rule breakers have been removed because of Airbnb’s collaboration with City Hall. “Airbnb has always reminded hosts to follow local rules before they list on the platform,” Robinson said. “We also provide hosts with clear information about the latest regulation in Spain.” As for the ban on short-term private room rentals, Airbnb questioned whether the new regulation affected rentals to business travelers or other types of nontourist visitors, and said that it was impossible for the company to distinguish between such types of guests. But a company spokesperson said that Airbnb would remove any private room listings from the platform if City Hall officially requested it do so. Sanz insisted that there are no exceptions to the law, including for business travelers. She added that the city is gathering the information it needs to make its official takedown request for short-term private room rentals. More broadly, Sanz said, one of City Hall’s biggest complaints with Airbnb is that the company continues to allow new hosts of apartments to declare themselves “exempt” from the law that requires them to have a tourist license, without asking them to provide any evidence to that effect. She said that Airbnb has taken down illegal listings that have reappeared on the platform, sometimes days later. She worries that the same will happen with room rentals. “This is a major problem that we have now, and we have been having it with Airbnb for the past several years,” Sanz said. She added that such problems have put tremendous pressure on City Hall, which now spends 2 million euros (about $2.3 million) per year to inspect Airbnb listings and enforce the city’s rules on home-sharing and tourist apartment rentals. Sanz said that the city has found that many hosts are professionals who are “speculating” on the housing market, not individuals looking to cover their basic needs.

Manel Casals, general manager of Barcelona’s hotel association, welcomed the ban, saying that Airbnb is “a concern for cities everywhere” because it deprives local governments of taxes, disrupts residential areas, and fails to ensure adequate health and safety standards for guests. “It will help Barcelona to prohibit this,” he said, adding that the city’s hotels do not consider Airbnb a competitor as they serve a different customer base. But Airbnb hosts such as Martha Ruiz were disappointed with the ban. Ruiz, who lives near Barcelona’s Collserola Park, stopped taking reservations for short-term guests following the imposition of the ban in August. “I don’t know what they are doing, why they want to prohibit it,” said Ruiz, an Airbnb host since 2017. “They can regulate, yes — but not prohibit something that isn’t doing any harm to anyone.” Hosts who violate the city’s rules risk attracting the attention of inspectors, and sanctions start at 6,000 euros (about $7,017). Plenty of fines have already been imposed: Since 2016, City Hall has initiated more than 9,000 legal proceedings against hosts who were breaking the rules. Sanz said that a crackdown on private room rentals will begin soon. Policymakers across Europe will no doubt be watching how things play out in Barcelona, which is a member of an association of nearly two dozen European cities — including Amsterdam, Paris and Prague — that are lobbying European leaders to support their efforts to regulate tourist rentals.