Banks, asset managers and insurers in recent days pledged to use trillions of dollars to achieve net-zero emissions targets as pension funds and other big investors move to divest trillions more from the fossil fuel industry 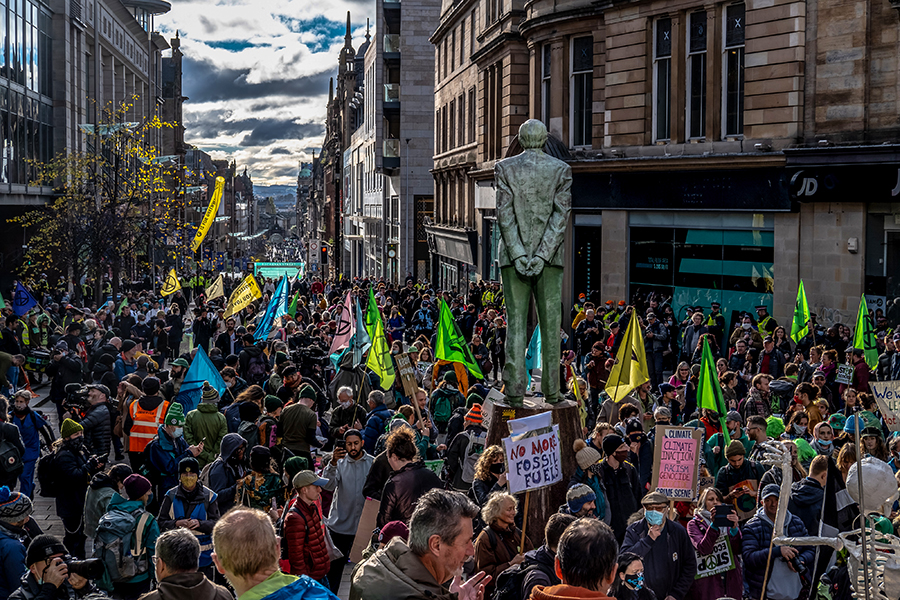 Demonstrators calling for action on the climite crisis march in Glasgow, Scotland during the COP26 Summit, Nov. 3, 2021. Leaders of the world’s biggest financial firms, including some who made pledges here in Glasgow, are making largely speculative claims about the unintended consequences of a rush to transition away from fossil fuels; Image: Andrew Testa/The New York Times

Big business finally seems to be taking the climate crisis seriously. After years spent lurking on the sidelines, CEOs of the world’s largest banks, companies and investment firms this week took a spot at the center of the debate at COP26.Banks, asset managers and insurers in recent days pledged to use trillions of dollars to achieve net-zero emissions targets as pension funds and other big investors move to divest trillions more from the fossil fuel industry.Yet some leaders of the world’s biggest financial firms — including some who were part of pledges made at the climate summit in Glasgow — are warning that the rush to rapidly transition away from a carbon-intensive energy system could unleash unintended consequences that would jeopardize the world’s economic recovery in the near term.While some of their concerns are so far largely speculative, they suggest that less investment in fossil fuel production could send energy prices soaring and that divestment could make it harder to monitor dirty energy production.Speaking at a conference in Saudi Arabia last week, Stephen Schwarzman, CEO of private equity firm Blackstone, said the growing number of institutional investors pledging to divest their holdings from fossil fuel companies was making it harder for oil and gas producers to finance production.“If you try and raise money to drill holes, it’s almost impossible to get that money,” Schwarzman said, adding that an energy shortage could lead to “real unrest” around the world. It is a sentiment that has been echoed by other executives in recent weeks, as U.S. oil prices hit $85 a barrel, a seven-year high.Jamie Dimon, CEO of JPMorgan Chase, said in an interview that the world should be transitioning to a decarbonized economy “right now.” But he cautioned that while less money was being invested in fossil fuels, therefore tightening the supply, it was important for banks to keep funding conventional energy production.“You’re not going to get rid of oil and gas consumption tomorrow,” he said.And Larry Fink, CEO of BlackRock, said that if fossil fuel production was reduced too quickly — before clean energy was abundant — it could cause energy prices to spike, disproportionately harming developing economies. “That’s going to create a more polarized, divergent world, and the emerging world can’t afford it,” he said in an interview.“Divestitures are not getting us to a net-zero world,” Fink added. “It’s just making it worse.”Despite the chieftains’ concerns, there is still ample money available to fossil fuel companies. In the six years since the Paris Agreement, banks have facilitated almost $4 trillion of financing for fossil fuel companies, including $459 billion worth of bonds and loans for oil, gas and coal companies this year alone, according to Bloomberg.At the same time, it is also true that more and more pension funds, university endowments and philanthropies are pledging to divest their holdings from dirty energy production. Last year, New York state’s $226 billion pension fund became among the largest to make such an announcement. Entities worth some $40 trillion have now committed to divest their holdings from fossil fuel production.There is little to suggest that the pledges to withdraw investment from fossil fuel businesses are affecting short-term energy prices. And with oil prices high once more, more investment could be on the way.“Just because some foundations and universities are divesting, that’s not why these companies don’t have capital,” said Raj Shah, president of the Rockefeller Foundation, which last year committed to divest its $6 billion endowment from fossil fuels.Shah pointed to a confluence of other factors that were roiling the energy market. The sudden rebound in global economic activity during the second year of the COVID-19 pandemic created a spike in demand for energy. Years of underinvestment in conventional power while prices were low left oil and gas producers with short supply. And supply chain disruptions are convulsing almost every industry, including the energy business.“There are always cyclical spikes, and we’re right now getting energy pricing,” Shah said.A Blackstone representative declined to make Schwarzman available for an interview. Yet he is hardly alone in sounding the alarm about the unintended consequences of the corporate world’s growing embrace of environmental, social and governance concerns, a broad set of considerations that includes everything from pledges to improve race relations to commitments to divest from fossil fuels.The top analyst covering commodities at Goldman Sachs, Jeff Currie, also warned that “divestiture by investors for ESG reasons compounded an already growing underinvestment problem,” adding that he believed energy prices would continue to rise until there was abundant clean power.David Solomon, CEO of Goldman Sachs, said last month that his firm would continue funding fossil fuel companies, stressing that not doing so would lead to much higher prices. “We have to balance good public policy with the short-term implications, and that’s why it is a transition,” he said. “If we’re too aggressive in the context of how we direct capital to the private sector, that can be more inflationary.”To supporters of the divestment movement, attributing high energy prices to the push to reduce funding of fossil fuels is a cynical attempt to undermine what they say is an important part of the solution to the climate crisis.“Blaming divestments for high prices and energy shortages is really a red herring,” said Ben Cushing, who runs the Sierra Club’s Fossil-Free Finance campaign. “The reality is that oil and gas are volatile global commodities and exist in a global market that is in flux for a lot of different reasons.”Henry Fernandez, CEO of MSCI, a financial services company that offers ESG products, suggested that finance firms were blaming environmental and social concerns for high energy prices in order to excuse lagging performance.

“The asset managers are under pressure not to support oil and gas investments, and they know that the transition is difficult and entails risks, and that they may underperform,” he said. “So they are pointing to ESG as the culprit so they can take a breather. That is not what the world needs.”And still, fossil fuel production will be with us for years to come, and senior banking executives are adamant that it is in the world’s best interest that major financial firms continue to support it. Without investment from large institutional investors, they say, many fossil fuel companies could be taken private, leading to less transparency and accountability, and potentially higher emissions.“We can’t have simple edicts like: No more fossil fuels. It’s just not practical,” Bill Winters, CEO of Standard Chartered, said in an interview with Bloomberg Television last month. “We’re going to be dependent on fossil fuels for the next 15 or 20 years, unless there’s some miraculous technology breakthrough.”Dimon said more coordination was needed to manage the global transition from a carbon-heavy economy to one in which clean energy is abundant.“There are so many ways to reduce CO2, but you’ve got to do it intelligently,” he said. “Banks should do their part. Plus we need thoughtful government policy.”Fink of BlackRock echoed the call for a more deliberate approach to the global energy transition, including efforts to ensure that developing countries had access to cleaner sources of energy and became less reliant on the burning of coal for power.“We need to create a realistic plan for a pathway to decarbonization,” he said. “There’s not enough long-term planning on how to get there.”

Tweets by @forbesindia
Can carbon capture really save the world?
Uber is losing big money, as China cracks down on Didi