Can carbon capture really save the world?

It is a permanent solution, unlike the planting of forests which can release their carbon by rotting, being cut down or burning in a warming planet 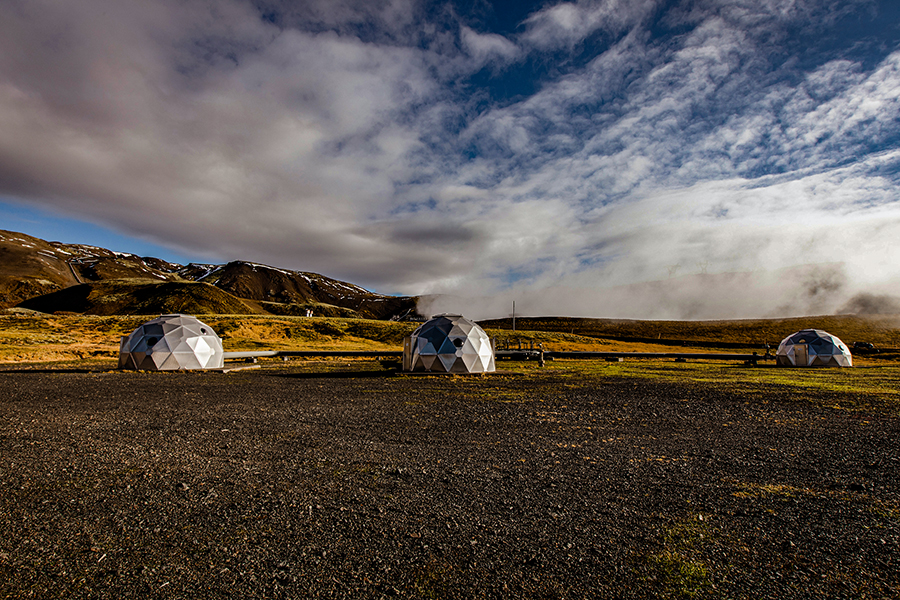 Steel igloos cover injection wells that the Icelandic start-up company Carbfix uses to inject carbon dioxide into the earth outside Reykjavik, Iceland, on Oct. 6, 2021. Carbfix has discovered that its CO2 mix will chemically react with basalt and turn to rock in just two or three years instead of the centuries that the mineralization process was believed to take; Image: Sigga Ella/The New York Times

Stephan Hitz paused from his work operating an odd-looking machine in an otherworldly landscape in Iceland and reached for a “Star Wars” analogy to explain his job at the frontier of climate technology.“I feel like I have come from the Dark Side to become a Jedi warrior,” he joked as he braced against a chill wind blowing across the treeless stretches of cooled lava and distant volcanoes.The 37-year-old service technician from Zurich spent nine years working in the aviation and marine industries before joining Climeworks, a Swiss startup that is trying to undo the damage caused by such heavily polluting industries.“It does give you extra satisfaction to know that you’re helping the planet instead of damaging it,” he said.

Hitz and his small team of technicians are running Orca, the world’s biggest commercial direct air capture (DAC) device, which in September began pulling carbon dioxide out of the air at a site 20 miles from the capital, Reykjavik.As the wind stirred up clouds of steam billowing from the nearby Hellisheidi geothermal power plant, a gentle hum came from Orca, which resembles four massive air-conditioners, each the size of one shipping container sitting on top of another.Each container holds 12 large round fans powered by renewable electricity from the geothermal plant, which suck air into steel catchment boxes where carbon dioxide, or CO2, the main greenhouse gas behind global warming, chemically bonds with a sandlike filtering substance.When heat is applied to that filtering substance it releases the CO2, which is then mixed with water by an Icelandic company called Carbfix to create a drinkable fizzy water.Several other firms are striving to pull carbon from the air in the United States and elsewhere, but only here in the volcanic plateaus of Iceland is the CO2 being turned into that sparkling cocktail and injected several hundred meters down into basalt bedrock.Carbfix has discovered that its CO2 mix will chemically react with basalt and turn to rock in just two or three years instead of the centuries that the mineralization process was believed to take, so it takes the CO2 that Climeworks’ DAC captures and pumps it into the ground through wells protected from the harsh environment by steel igloos that could easily serve as props in a space movie.It is a permanent solution, unlike the planting of forests which can release their carbon by rotting, being cut down or burning in a warming planet. Even the CO2 that other firms are planning to inject into empty oil and gas fields could eventually leak out, some experts fear, but once carbon turns to rock it is not going anywhere.Orca is billed as the world’s first commercial DAC unit because the 4,000 metric tons of CO2 it can extract each year have been paid for by 8,000 people who have subscribed online to remove some carbon, and by firms including Stripe, Swiss Re, Audi and Microsoft.The rock band Coldplay recently joined those companies in paying Climeworks for voluntary carbon credits to offset some of their own emissions. The firm hopes to one day turn a profit by getting its costs below the selling price of those credits.The problem is that Orca’s output equals just three seconds of humanity’s annual CO2 emissions, which are closer to 40 billion metric tons, but Orca has at least shown that the concept of scrubbing the air clean and putting carbon back underground has moved from science fiction to science.Tarek Soliman, a London-based climate change analyst at HSBC Global Research, said the launch in Reykjavik is not the sort of “quantum leap” that would prove the technology can reach the scale and cost required to have a real impact on climate change.“But it is a step in that direction,” Soliman said. “Given that direct air capture has been seen by many people as a nonsense, this is something you can see and touch that puts it on a pathway to credibility.”Christoph Gebald, Climeworks’ co-founder, is adamant that the technology can grow into a trillion-dollar industry in the next three or four decades, a goal that he says would be helped if the United Nations climate conference in Glasgow, Scotland, called COP26, sees most nations commit to net zero emissions by 2050.“That would be a dream outcome from Glasgow, along with decision-makers recognizing that any approach that leads to net zero must include carbon removal as well as emission reduction,” he said from Zurich.Gebald, a soft-spoken 38-year-old, began working on DAC with a fellow German, Jan Wurzbacher, while they were studying mechanical engineering in Switzerland. They formed their company in 2009, but Gebald said their big breakthrough was the release of the U.N.-led Intergovernmental Panel on Climate Change report in 2018, setting out the need for reaching net zero emissions by 2050 if global warming was to be kept to 1.5 degrees Celsius. Crucially, it also produced the first scientific consensus that some emissions would be too hard to eradicate so all viable paths to “net zero” would rely on removing some previous emissions.Gebald said machine-based solutions may have to carry half that workload because the potential for most nature-based options are limited by a shortage of arable land.Getting from 4,000 metric tons a year to 5 billion metric tons quickly enough to help limit climate change may seem fanciful, but there is an intriguing comparison with the world’s first commercial wind farm, which opened in 1980 on Crotched Mountain in New Hampshire.That project consisted of 20 turbines with a combined output of 600,000 watts. Forty years later, in 2020, the wind capacity installed around the world was 1.23 million times larger, at 740 gigawatts.Increasing Orca’s annual output at the same rate would yield a CO2 removal capacity of 5 billion metric tons by around 2060.“That is exactly what climate science asks us to do to achieve climate targets,” Gebald said.The challenge will hinge on reducing costs, which Gebald said are now about $600 to $800 a metric ton. Increased output could bring those costs down to $200 to $300 a metric ton by 2030, and $100 to $150 somewhere around 2035, he said.DAC would already be competitive if it received the subsidies that helped electric vehicles and solar panels deploy and flourish, Gebald said.A fundamental difference from wind and solar power is that they were ultimately driven by the profit motive because once subsidies had helped to make them competitive they were producing a valuable asset: cheap electricity.DAC’s main “output” — helping to save the planet — must instead rely on government supports such as emission credits and taxes on carbon emitters, hence the importance of meetings such as the Glasgow conference. 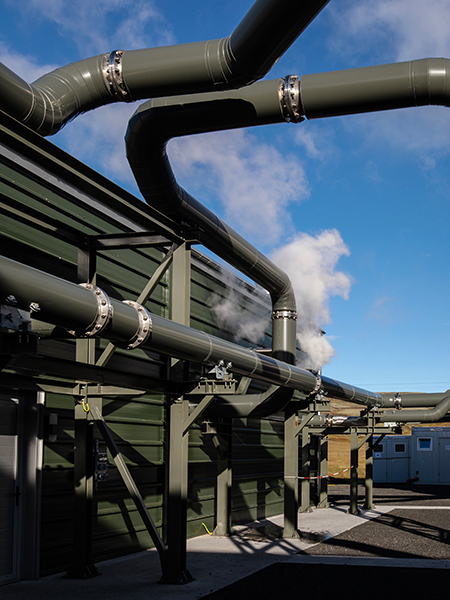 Orca sucks air into large containers where a sand-like filtering material extracts the carbon dioxide, outside Reykjavik, Iceland on Oct. 6, 2021; Image: Sigga Ella/The New York TimesWhile Hitz and his team are monitoring Orca to hone their next plant, which will be 10 times larger and is expected to launch in two to three years, Gebald acknowledged that in many ways Orca, meant to operate for a decade, has already achieved its goal. “We know that the technology works, so the main experiment with Orca really was testing the market interest in carbon removal, and we’re very happy that already a large share of the lifetime capacity of the plant has been contracted.”Carbfix is busily exploring how to adapt its mineralization process to other types of rock and how to use seawater at sites that are short of fresh water.Carbfix was launched as a research project in 2007 after prodding by the then-president of Iceland, Olafur Ragnar Grimsson, who had been told by a local scientist that Iceland’s highly porous basalt could mineralize CO2 without creating any seismic problems.Grimsson consolidated his role as Orca’s “fairy godfather” shortly after ending his 20 years as president in 2016, when he was walking through the bar of a luxury hotel at that year’s U.N. climate meeting in Marrakech, Morocco.“I happened to overhear this American investor sitting at a table loudly boosting this new Swiss company that he said had the technology to pull carbon straight out of the air,” he said.“So I stopped and said ‘Hey, in Iceland we know how to turn that stuff into rock!’” He put Gebald together with Carbfix “and bingo, that was the missing link.”Despite that lucky accident, Edda Aradottir, the chief executive of Carbfix, said she is not confident that the latest U.N. climate conference will do enough to help “negative emission technologies” live up to their potential.“Somehow it seems that these events rarely achieve what they set out to do,” she said.Grimsson is also downbeat about Glasgow, saying “the problem is that COPs are primarily about finding ways to reduce emissions.”That is fine, he said, but “we also have to destroy some of the carbon that is already in the air. If we don’t start doing that very, very quickly we are never going to succeed on climate change.”

Tweets by @forbesindia
What to do about Facebook, and what not to do
Can climate pledges lead to rising prices?