Charlie Watts, bedrock drummer for the Rolling Stones, dies at 80

While some rock drummers chased after volume and bombast, Watts defined his playing with subtlety, swing and a solid groove 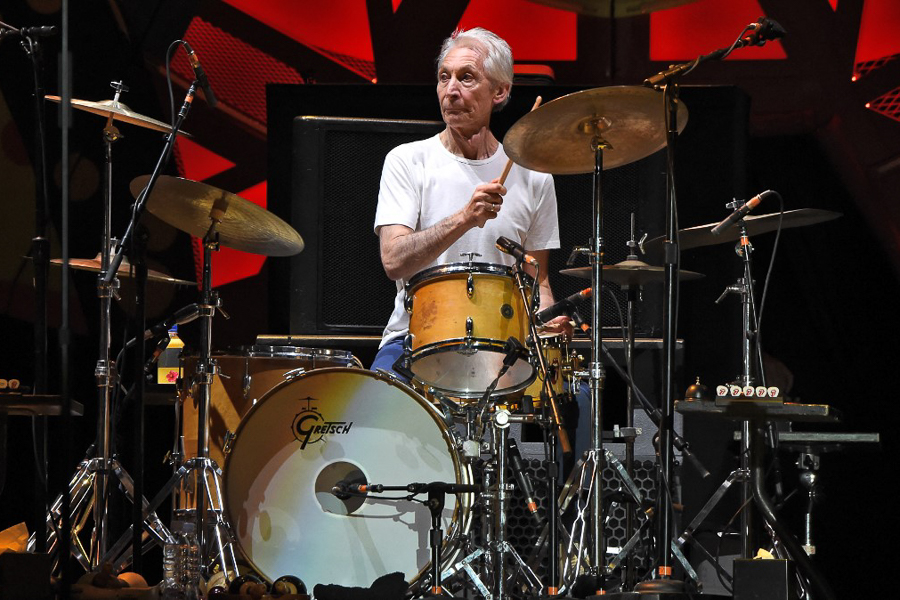 Charlie Watts, whose strong but unflashy drumming powered the Rolling Stones for over 50 years, died on Tuesday in London. He was 80. His death, in a hospital, was announced by his publicist, Bernard Doherty. No other details were immediately provided.  The Rolling Stones announced earlier this month that Watts would not be a part of the band’s forthcoming “No Filter” tour of the United States after he had undergone an unspecified emergency medical procedure, which the band’s representatives said had been successful.

Reserved, dignified and dapper, Watts was never as flamboyant, either onstage or off, as most of his rock-star peers, let alone the Stones’ lead singer, Mick Jagger; he was content to be one of the finest rock drummers of his generation, playing with a jazz-inflected swing that made the band’s titanic success possible. As Stones guitarist Keith Richards said in his 2010 autobiography, “Life,” “Charlie Watts has always been the bed that I lie on musically.”  While some rock drummers chased after volume and bombast, Watts defined his playing with subtlety, swing and a solid groove.  “As much as Mick’s voice and Keith’s guitar, Charlie Watts’ snare sound is the Rolling Stones,” Bruce Springsteen wrote in an introduction to the 1991 edition of drummer Max Weinberg’s book “The Big Beat.” “When Mick sings, ‘It’s only rock ’n’ roll but I like it,’ Charlie’s in back showing you why!”  Charles Robert Watts was born in London on June 2, 1941. His mother, the former Lillian Charlotte Eaves, was a homemaker; his father, Charles Richard Watts, was in the Royal Air Force and, after World War II, became a truck driver for British Railways.  Charlie’s first instrument was a banjo, but, baffled by the fingerings required to play it, he removed the neck and converted its body into a snare drum. He discovered jazz when he was 12 and soon became a fan of Miles Davis, Duke Ellington and Charles Mingus.  By 1960, Watts had graduated from the Harrow School of Art and found work as a graphic artist for a London advertising agency. He wrote and illustrated “Ode to a Highflying Bird,” a children’s book about jazz saxophonist Charlie Parker (although it was not published until 1965). In the evenings, he played drums with a variety of groups.  Most of them were jazz combos, but he was also invited to join Alexis Korner’s raucous rhythm-and-blues collective, Blues Incorporated. Watts declined the invitation because he was leaving England to work as a graphic designer in Scandinavia, but he joined the group when he returned a few months later.  The newly formed Rolling Stones (then called the Rollin’ Stones) knew they needed a good drummer but could not afford Watts, who was already drawing a regular salary from his various gigs. “We starved ourselves to pay for him!” Richards wrote. “Literally. We went shoplifting to get Charlie Watts.”  In early 1963, when they could finally guarantee 5 pounds a week, Watts joined the band, completing the canonical lineup of Richards, Jagger, guitarist Brian Jones, bassist Bill Wyman and pianist Ian Stewart. He moved in with his bandmates and immersed himself in Chicago blues records.  In the wake of the Beatles’ success, the Rolling Stones quickly climbed from being an electric-blues specialty act to one of the biggest bands in the British Invasion of the 1960s. While Richards’ guitar riff defined the band’s most famous single, the 1965 chart-topper “(I Can’t Get No) Satisfaction,” Watts’ drum pattern was just as essential. He was relentless on “Paint It Black” (No. 1 in 1966), supple on “Ruby Tuesday” (No. 1 in 1967) and the master of a funky groove on “Honky Tonk Women” (No. 1 in 1969).  Watts was ambivalent about the fame that he achieved as a member of the group that has often been called “the world’s greatest rock ’n’ roll band.” As he said in the 2003 book “According to the Rolling Stones”: “I loved playing with Keith and the band — I still do — but I wasn’t interested in being a pop idol sitting there with girls screaming. It’s not the world I come from. It’s not what I wanted to be, and I still think it’s silly.”  As the Stones rolled through the years, Watts drew on his graphic-arts background to contribute to the design of the band’s stage sets, merchandise and album covers — he even contributed a comic strip to the back cover of their 1967 album “Between the Buttons.” While the Stones cultivated bad-boy images and indulged a collective appetite for debauchery, Watts mostly eschewed the sex and drugs. He clandestinely married Shirley Ann Shepherd, an art-school student and sculptor, in 1964.  On tour, he would go back to his hotel room alone; every night, he sketched his lodgings. “I’ve drawn every bed I’ve slept in on tour since 1967,” he told Rolling Stone magazine in 1996. “It’s a fantastic nonbook.” Watts and his wife had a daughter, Seraphina, in 1968 and, after spending some time in France as tax exiles, relocated to a farm in southwestern England. There they bred prizewinning Arabian horses, gradually expanding their stud farm to over 250 horses on 700 acres. Information on his survivors was not immediately available. Doherty, the publicist, said Watts had “passed away peacefully” in the hospital “surrounded by his family.”  Watts’ true love remained jazz, and he would fill the time between those tours with jazz groups of various sizes — the Charlie Watts Quintet, the Charlie Watts Tentet, the Charlie Watts Orchestra. Soon enough, though, he would be back on the road with the Stones, playing in sold-out arenas and sketching beds in empty hotel rooms.  He was not slowed down by old age, or by a bout with throat cancer in 2004. In 2016, drummer Lars Ulrich of Metallica told Billboard that since he wanted to keep playing into his 70s, he looked to Watts as his role model. “The only road map is Charlie Watts,” he said.  Through it all, Watts kept on keeping time on a simple four-piece drum kit, anchoring the spectacle of the Rolling Stones.  “I’ve always wanted to be a drummer,” he told Rolling Stone in 1996, adding that during arena rock shows, he imagined a more intimate setting. “I’ve always had this illusion of being in the Blue Note or Birdland with Charlie Parker in front of me. It didn’t sound like that, but that was the illusion I had.”

Tweets by @forbes_india
Will Tesla share its self-driving system with other manufacturers?
A look into Yatharth Group's covid journey with Mr. Yatharth Tyagi