Over the past week, tens of millions of people have downloaded Signal and Telegram, making them the two hottest apps in the world 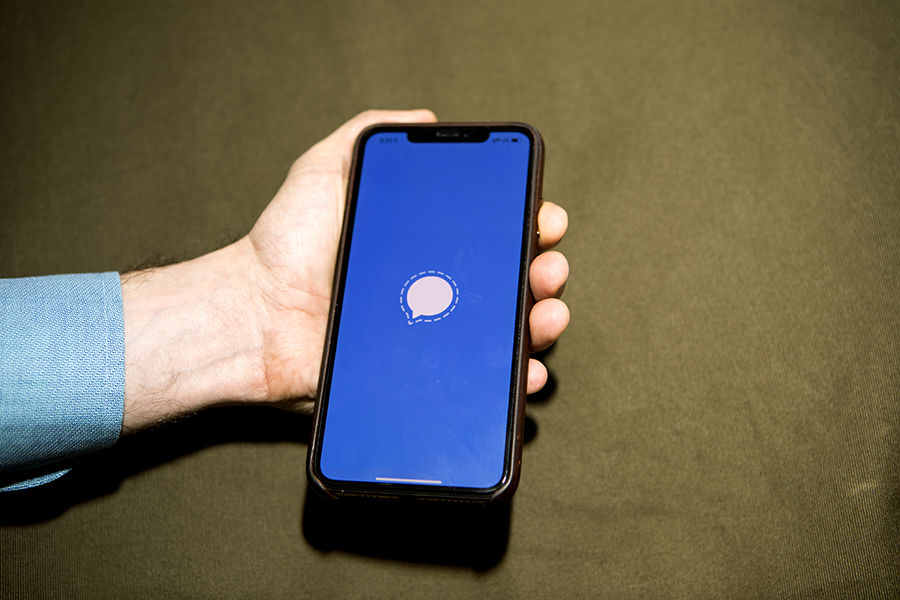 The messaging app Signal, which allows messages to be sent with "end-to-end encryption," on a phone in Shanghai, China, Feb. 26, 2019. The encrypted messaging services Telegram and Signal have become the world’s hottest apps over the last week, driven by growing anxiety over the power of the biggest tech companies and privacy concerns; Image: Giulia Marchi/The New York Times

Neeraj Agrawal, a spokesman for a cryptocurrency think tank, has typically used the encrypted messaging app Signal to chat with privacy-minded colleagues and peers. So he was surprised on Monday when the app alerted him to two new users: Mom and Dad. “Signal still had a subversive shine to it,” said Agrawal, 32. “Now my parents are on it.” On Telegram, another encrypted messaging app, Gavin McInnes, founder of the far-right Proud Boys group, had just announced his return. “Man, I haven’t posted here in a while,” he wrote on Sunday. “I’ll be posting regularly.” And on Twitter, Elon Musk, the billionaire entrepreneur, also weighed in last week with a two-word endorsement: “Use Signal.”

Over the past week, tens of millions of people have downloaded Signal and Telegram, making them the two hottest apps in the world. Signal allows messages to be sent with “end-to-end encryption,” meaning no one but the sender and receiver can read its contents. Telegram offers some encrypted messaging options, but is largely popular for its group-based chat rooms where people can discuss a variety of subjects. Their sudden jump in popularity was spurred by a series of events last week that stoked growing anxiety over some of the big tech companies and their communication apps, like WhatsApp, which Facebook owns. Tech companies including Facebook and Twitter removed thousands of far-right accounts — including President Donald Trump’s — after the storming of the Capitol. Amazon, Apple and Google also cut off support for Parler, a social network popular with Trump’s fans. In response, conservatives sought out new apps where they could communicate. At the same time, privacy worries rose over WhatsApp, which last week reminded users in a pop-up notification that it shares some of their data with its parent company. The notification set off a wave of anxiety, fueled by viral chain messages that falsely claimed that Facebook could read WhatsApp messages. The result was a mass migration that, if it lasts, could weaken the power of Facebook and other big tech companies. On Tuesday, Telegram said it added more than 25 million users over the previous three days, pushing it to over 500 million users. Signal added nearly 1.3 million users on Monday alone, after averaging just 50,000 downloads a day last year, according to estimates from Apptopia, an app-data firm. “We’ve had surges of downloads before,” said Pavel Durov, Telegram’s chief executive, in a message on the app on Tuesday. “But this time is different.” Carl Woog, a spokesman for WhatsApp, said that users’ privacy settings had not changed and that rumors about what data is shared were largely unfounded. “What’s not changing is that private messages to friends and family, including group chats, will be protected by end-to-end encryption so that we cannot see them,” he said. The rise of Telegram and Signal could inflame the debate over encryption, which helps protect the privacy of people’s digital communications but can stymie the authorities in crime investigations because conversations are hidden. Telegram has been particularly popular for those on the far right because it mimics social media. So after Facebook and Twitter limited Trump on their services last week and other companies began pulling their support from Parler, far-right groups on Parler and other fringe social networks posted links to new Telegram channels and urged people to join them there. In the four hours after Parler went offline on Monday, one Proud Boys group on Telegram gained over 4,000 new followers. The flood of users to Telegram, which is based in Dubai, and Signal, which is based in Silicon Valley, goes far beyond just the American far right. Durov said that 94% of Telegram’s 25 million new users came from Asia, Europe, Latin America, the Middle East and North Africa. Nearly all of Signal’s new user adoption is coming from outside the United States. As of Wednesday, the company said it was the No. 1 app in 70 countries on iOS devices and in 45 countries on Android devices, with India being one of the biggest areas of new user growth. For both Signal and Telegram, new installations came from users in Indonesia, Mexico, Brazil and dozens of other countries, data from Apptopia shows. Fears over WhatsApp’s privacy policies have driven Telegram and Signal’s popularity. While there was no meaningful change to how WhatsApp handles users’ data, people immediately interpreted the app’s privacy notification last week to mean that it was infiltrating all kinds of personal information — like personal chat logs and voice calls — and sharing that data with businesses. WhatsApp quickly said people were mistaken and that it could not see anything inside of encrypted chats and calls. But it was too late. “The whole world now seems to understand that Facebook is not building apps for them, Facebook is building apps for their data,” said Moxie Marlinspike, the founder and chief executive of Signal. “It took this one small catalyst to push everyone over the edge of making a change.” The fervor has been such that on Tuesday, Moses Tsali, a Los Angeles rapper, released a music video for his song, “Hit Me On Signal.” And Musk’s endorsement of Signal last week sent publicly traded shares of Signal Advance Inc., a small medical device maker, soaring from a roughly $50 million market value to more than $3 billion. (The company has no relation to the messaging app.) Some world leaders have also urged people to join them on the apps. On Sunday, the Twitter account of President Andrés Manuel López Obrador of Mexico talked about his new group on Telegram. By Wednesday, it had nearly 100,000 members.

Tweets by @forbes_india
Photo of the Day: Hands that feed the world
Donald Trump is impeached, again. What now?