Magnetic resonance imaging (MRI) is typically used by medical professionals to visualize the internal structures of the human body. By using MRI to study the brain, Ming Hsu, assistant professor of marketing at the University of California, Berkeley's Haas School of Business, found a method to characterize how the different regions of the brain function in concert to enable people to anticipate and respond to competitors' behavior.

Hsu’s ongoing work to understand how people behave and learn in these complex social and strategic settings is at the forefront of the emerging fields of neuroeconomics and neuromarketing, merging traditional economic models with new mental models of behavior. 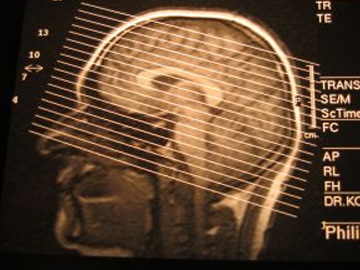 In the paper, “Dissociable neural representations of reinforcement and belief prediction errors underlie strategic learning” (PNAS: Proceedings of the National Academy of Sciences of the United States of America, January 2012), Hsu and co-authors Lusha Zhu and Kyle Mathewson, both at the University of Illinois at Urbana-Champaign, studied how brains of participants responded to outcomes that were determined jointly by their own action and the actions of their opponents.

For example, imagine two companies engaged in a bidding war for oil. Strategic thinking requires that the companies must not only consider how much supply is available but anticipate how the competitor will bid. Hsu used economic models to look at how the brain uses the history of an opponent’s action to build a mental model of what other participants in the market are doing to arrive at their behavior.

“We are able to observe how brain responses fluctuate over time dynamically in response to choices and contingencies that participants are faced with,“ says Hsu. “That means we look not just at the static structure but at how the brain responds over the course of decision making.”

During scanning, participants were asked to play a multi-strategy, economic investment game. Two players were randomly matched at the beginning of each round and competed for a prize by selecting an investment. The player who invested the most won the prize but, regardless, both players lost the amount they invested. The goal of the investment game, therefore, was to invest one unit more than the opponent. Investing more than that merely wasted the extra units invested, and investing less resulted in losing the prize. Of course, the opponent was trying to do the same thing.  By considering the opponent’s beliefs and likely moves, the participants learned to maximize their financial reward. The researchers examined neural responses during the game to track how an opponent’s change of behavior affects the other player.

The researchers focused on two types of learning processes. So-called “reinforced-based learning” (RL) operates through trial and error. In contrast, more sophisticated “belief-based learning” requires decision-makers to anticipate and respond to the actions of others. The researchers computed the areas of the brain where activity tracks these two types of learning. In addition, they discovered that the prefrontal cortex is an area that processes learning about others’ beliefs. The same area also predicts an individual’s propensity to engage in either belief learning or simply RL.

Hsu says that the same neural processes involved in this type of competitive strategic decisions are likely involved in other types of economic and consumer decisions. By studying decision-making processes in the brain, marketers may improve upon traditional surveys and market research methods to predict consumer behavior.

“We can use neuroscience as a supplement to standard research practices,” says Hsu. “For example, in addition to conducting focus groups or surveys of consumers, we can one day look at neural responses of consumers and understand how their brains react to, for example, advertising campaign and promotions.”

Tweets by @forbesindia
Here's Where You Can Drive As Fast As You Want
Sudhir Sethi: The Venturepreneur