Are productivity increases contributing to social inequality?, asks Jim Heskett. At what point does inequality become a threat to democracy? What do YOU think?

Inequality seemed to have been the byword of the year for 2013. Studies documented increases in the gap (or in a few studies, the opposite view) between rich and poor. Headlines, at least in the United States, typically focused on the share of wealth and income accumulated by the top .1 percent or 1 percent of the population. Attention also focused on the fact that people in the bottom 20 percent were not just in low-paying jobs. Unusually large numbers that wanted jobs had none and hadn't had paying work for months.

Couple that with the following: How many times in the past twelve months have you read or heard the comment by managers in the private and especially the public sectors that, "We need to do more with less?" The underlying assumption, of course, is that greater productivity will cure whatever ails an organization. Something good will come from it, either for an individual organization, a community, or an entire economy. Does that assumption hold? 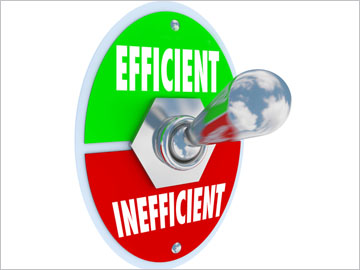 Image: {Shutterstock}
Increased productivity from whatever source—investments in technology, better methods, or just more effort—without compensating growth will naturally lead to fewer labor inputs (and jobs) per unit produced. For example, in the US employment has increased much more slowly than either improved productivity or growth in the economy. One result may be the structural unemployment associated with long periods without a job and the obsolescence of skills that occurs with increasing rapidity in an information economy.

These concerns are not new. Jeremy Rifkin raised them in 1995 in his book, The End of Work. More recently, Jaron Lanier concluded that job-destroying productivity leading to inequality occurs when all of us contribute information about ourselves gratis on the Internet to a few high-tech entrepreneurs who get paid for the information and accumulate all its monetary value. He cites, as an example, the fact that 140,000 Kodak employees were replaced in large part by startups like Instagram (an Internet-based distributor of photos) a company with just 13 employees that was purchased last year by Facebook for $1 billion.

I've heard no one argue that the solution lies in reduced productivity. Rather the concern appears to be with how the fruits of increased productivity are distributed. Rifkin suggests that a solution lies in fostering what he calls a Third Sector, comprising the civil society. He proposes "Taxing a percentage of the wealth generated by the new Information Age economy and redirecting it into the neighborhoods and communities of the country, and toward the creation of jobs and the rebuilding of the social commons …." Lanier's solution lies in creatively using information technology to produce a blizzard of "nanopayments" to all of us who supply valuable information gratis to Facebook and other information exchanges that have expropriated value from both the employed and unemployed of our society.

Are productivity increases contributing to social inequality? At what point does inequality become a threat to democracy (and the lives of the 1%)? Is this something that market mechanisms can resolve? Or will responses like those Rifkin proposes be the answer? Or are these just 2013's issues of the day? What do you think?