Can the explosive growth in telemedicine sustain?

Telemedicine has been around in India for over two decades, but got a shot in the arm amid the coronavirus lockdown. What happens after the pandemic blows over? 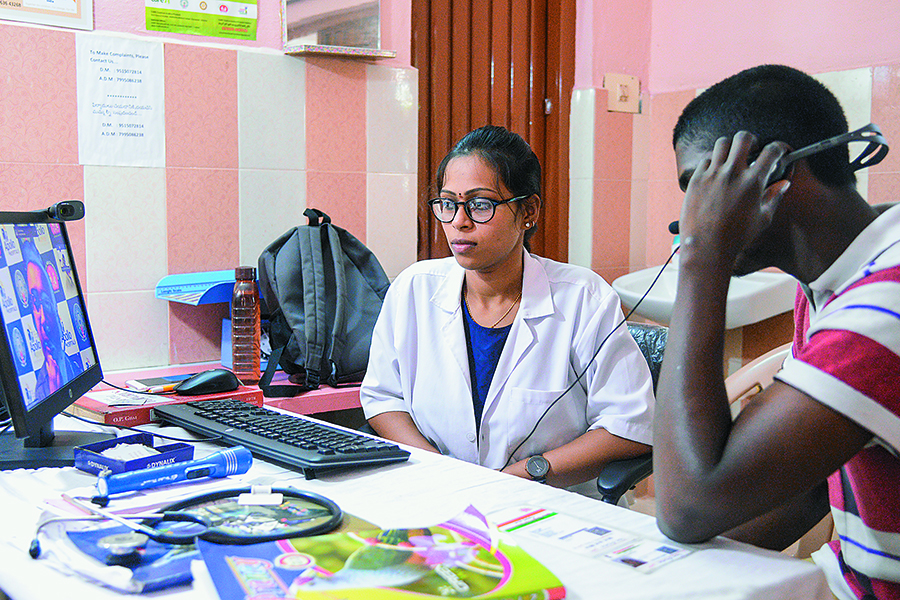 A Mahalakshmi often felt dizzy and fatigued. Then one day, about two years ago, her knees buckled and she collapsed in the bathroom. She visited several doctors in government hospitals but the problem persisted. “My main concern was always my kids. Especially my daughter… she is very young,” says Mahalakshmi, 35.

She happened to hear about “good treatment” available at an urban primary health centre in Vijayawada, her hometown in Andhra Pradesh, and popped in for a visit. When the medical officer checked her blood pressure, he couldn’t record any pulse beats in her left arms. He booked a teleconsultation with one of Apollo Hospitals’ cardiologists, who concluded over a computer screen that it was a vascular problem. He directed Mahalakshmi to a nearby cardiologist who confirmed a blockage in the artery in her left hand.

Immediately, stenting was carried out at the Guntur Government Hospital. “The pain has reduced and I am now able to do my work… My fear about my kids has gone. What else can I wish for?” smiles Mahalakshmi.

In 2016, the government of Andhra Pradesh teamed up with Apollo Hospitals to convert their urban primary health centres into telemedicine centres. Today 183 such centres in the state’s nine districts provide basic services as well as previously unattainable specialist care to poor patients like Mahalakshmi. Each centre sees more than 60 patients a day, up from seven to 10 before Apollo’s involvement.

Telemedicine has been around in India for over two decades, says Dr K Ganapathy, a neurosurgeon and one of the pioneers of telemedicine in India. He helped set up the Apollo Telemedicine Networking Foundation and Apollo Telehealth Services back in 2001 and today serves on the board of directors. The first 15 years, he says, went in “evangelising” telemedicine. It’s only in the last five years that an uptick in growth was seen, largely due to public-private partnerships like the one initiated by the Andhra Pradesh government.

“Even so, there is no doubt that in the last four months, developments in the face of Covid-19 have achieved what we could not for 20-plus years,” says Ganapathy. According to him, India was seeing 75,000 to 80,000 tele-consultations a day before the pandemic—negligible for a population of 1.3 billion. The figure is up tenfold today.

Despite the strong case for virtual care—consider India’s overwhelmed health care system with its shortage of doctors (1.34 per 1,000 people, according to the World Health Organization compared to 2.6 in the US and 1.98 in China), paucity of hospital beds and uneven access—telemedicine remained on the fringes prior to Covid-19. One of the biggest stumbling blocks was the lack of government regulations, making doctors fearful of engaging in it. Unstable internet connections, unfamiliarity with what telemedicine involved for both patients and doctors, and an absence of trust that a reliable diagnosis can be made without physical contact curtailed telemedicine’s growth.

That changed on March 25 when the Ministry of Health and Family Welfare notified telemedicine guidelines, making text, audio and video-based medical care legal. Soon after, the Telemedicine Society of India conducted an online session on telemedicine best practices, which was attended by “thousands of doctors”, says Ganapathy, a former president of the society. Many more orientation programmes and webinars have followed. Even the Insurance Regulatory And Development Authority, a regulatory body that protects the interests of insurance holders, recommended that insurance firms recognise telemedicine for reimbursement claims.

Moreover, as patients steer clear of hospitals for fear of catching Covid-19 and the lockdown places restrictions on movement, behavioural changes have been forced on patients and doctors alike. Trust barriers have been broken and inhibitions shed. Some of these changes would have taken years to materialise, says Prasad Kompalli, the boss of MFine, an on-demand tele-consultation service set up in 2017. “In two years, we added 250 hospitals on our platform and around 1,000 doctors. We were growing 15 percent month-on-month. In the last three months, we have added 250 hospitals and 2,000-odd doctors. We’re now growing at 25 to 30 percent a month,” he says. Aside from patients calling in for Covid-19 symptoms, other ailments have also caused an uptick in consultations. Patients earlier used telemedicine mostly for mental or sexual health issues, which they felt awkward discussing in-person. “Now that has changed. Patients are using the service for all kinds of ailments,” says Kompalli. 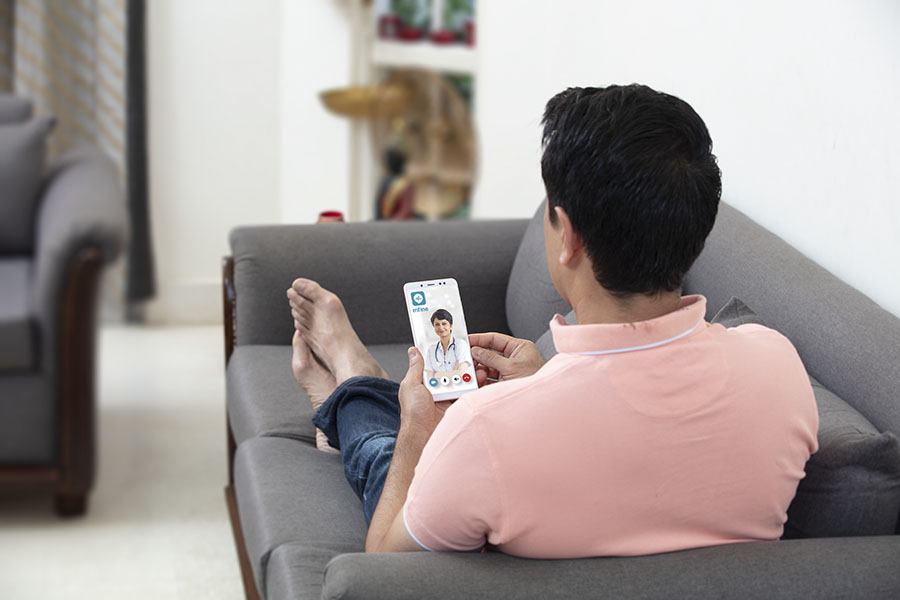 Meena Ganesh of Portea, which provides tele-consultations as part of its in-home medical care services, concurs: “Before Covid-19, patients would use telemedicine just to get a second opinion from a doctor. But since the outbreak, telemedicine has become their first point of care.” MyUpchar, a telemedicine service for tier 2 and 3 towns, has seen a 3x jump in demand, says co-founder and CEO Rajat Garg. Practo registered a 600 percent growth in tele-consultations since March, with 70 percent of users being first-timers.

The demand for tele-consultations has increased to the extent that 100-plus stakeholders, including private hospitals, healthtech startups, doctors, business leaders and public health experts—who would normally be considered competitors—came together to form Swasth. Launched in mid-June, the not-for-profit app provides free tele-consultations on Covid-19-related queries. A person must first answer a few artificial intelligence (AI)-generated questions on the app, based on Indian Council of Medical Research guidelines. The algorithm evaluates the answers to determine the person’s risk level and places a request for a consultation if needed. The app now has 2,500 doctors registered on it to provide tele-consultations. “Covid-19 has provided a catalyst for telemedicine,” says Kris Gopalakrishnan, co-founder of Infosys, and member of Swasth’s governing council.

Amazon India’s recent launch of Amazon Pharmacy in Bengaluru adds further heft to the sector, as does Reliance’s $83 million acquisition of Netmeds, an online pharmacy. Not only will Amazon Pharmacy sell over-the-counter and prescription-based drugs, it also plans to offer telemedicine and diagnostic services. Reliance has similar plans; besides through its subsidiary Reliance Life Sciences it is already in the process of setting up pathology labs.

The big question, however, is will telemedicine outlast the pandemic? Or will patients and doctors slip back into old habits once the virus abates?

“Telemedicine is here to stay,” says Shripati Acharya, partner at Prime Venture Partners, which led MFine’s $4.2 million pre-Series A financing round in mid-2018.

But it depends on several factors. First, concerns over data security must be allayed. At present, companies must comply with the data privacy laws mentioned in the IT Act, 2000. But once the Personal Data Protection Bill (2019) gets signed into law, a greater level of compliance will be necessary. For instance, adhering to principles of accountability to the patient whose data is being used, providing the right to data erasure, facilitating data audits and ensuring localised data storage. “Privacy and security of patient data are critical,” says Ganapathy. “But if we wait for a totally foolproof secure EMR [electronic medical records] system, we will never see the light of day. So I often tell my peers that let’s start and build up privacy and security as we go along. Initially, some amount of trust is required.”

Second, the business model for telemedicine providers needs to be viable. “For us, telemedicine is not our primary business. We offer it to complete our suite of in-home medical care services. So while we may acquire customers through tele-consultations, we are then able to provide them with a host of other services,” says Ganesh. But if a platform is just a marketplace that connects patients to doctors and takes a cut, then, she reckons, the cost of acquiring a customer exceeds the lifetime value to be got from her.

Platforms like MyUpchar started off by charging for tele-consultations, albeit a minimal amount, but soon waived it off. “Rural patients usually go to quacks who don’t charge for consultations; they charge for medicines. Or they travel several kilometres and go to government hospitals where, again, the services are free,” says Garg. That prompted the Delhi-based startup to include doorstep delivery of medicines with a cash-on-delivery option, which 95 percent of users prefer. “The margins we make on that allow us to offer free consultations,” he says.

Third, payment parity between in-person and tele-consultations is important to incentivise doctors. Apollo TeleHealth has worked around this by conducting regular “telecamps”, says CEO Vikram Thaploo. Five to 10 patients with, say, orthopaedic-related concerns, are brought together to tele-consult with a specialist doctor one at a time. The specialist is compensated by the hour. “Doctors are more than happy doing this. It has worked well for us,” he says.

Fourth, tardy internet connections still plague many parts of the country. “We often have to ask patients to upload a video of themselves explaining their ailment, whenever they are able to get a decent connection. Thereafter a doctor calls them,” says Garg. As the use of more sophisticated technologies like AI and machine learning in telemedicine furthers, and data sets become more robust, patient outcome will improve. MFine, for example, developed an AI-based tool to identify the sound of different coughs from patients. Users cough into their phone mic and the app classifies it as dry or wet, and if it is from the lower or upper respiratory tract. Doctors can then take appropriate action. “In this way, the smartphone becomes more than a tool for connectivity. It becomes a tool for diagnosis too,” says Kompalli.

Finally, the continued growth of telemedicine depends on the patient experience. “If there’s minimal difference between what a patient gets from in-person and tele-consultations then it’s unlikely he will slip back to normal behaviour post-Covid-19,” says Acharya. The convenience of telemedicine and the time it saves is a huge draw.

The potential of telemedicine is tremendous. And while its pace of growth may dip, as Thaploo puts it, “The train has already left the station.”

Tweets by @forbesindia
Wall Street has its worst day in months
Can these startups fix rural healthcare in India?