From mosquito eradication to Covid-19 surveillance

How Telangana-based Marut Dronetech, a startup that uses IoT, AI and drones, re-engineered its technology to fight the pandemic 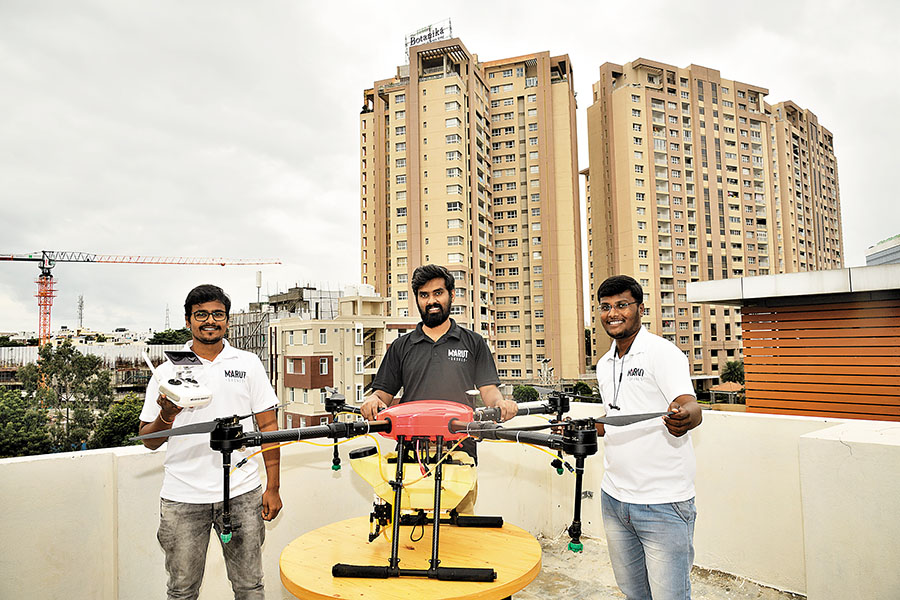 The Covid-19 outbreak has brought untold miseries to many businesses, but the healthtech landscape has grown through it, devising ingenious mechanisms and technologies to fight the public health crisis. According to DataLabs by Inc42+’s ‘India’s Healthtech Landscape In A Post-Covid-19 World Report 2020’, the size of the healthtech market in India is likely to touch $21 billion by 2025.

While the lockdowns restricted the availability of raw materials, broke the supply chain, and made labour scarce, a number of healthtech startups augmented or revamped their existing resources to fight Covid-19. Take for instance, Telangana-based Marut Dronetech’s drones that were re-engineered to help with disinfection and surveillance across 19 districts in Telangana, or Bengaluru-based Invento Robotics that launched two robots and also raised ₹2 crore in the process.

“The mosquito eradication drone was tweaked for spraying disinfectants, afforestation and diagnosis drones for surveillance and announcements, and agriculture drones for thermal scanning,” says Prem Kumar Vislawath, co-founder, Marut Dronetech. For medical deliveries, they collaborated with the emerging technologies wing of the Telangana government, Apollo Hospitals, and the World Economic Forum. “With our surveillance drones, we could do facial recognition for positive or quarantined coronavirus patients, and analytics on social distancing and mask usage to identify vectors amid crowds,” he adds.

The company has tied up with the state—where it has worked in 19 districts—free of cost. “Most of our drones are B2G-centric [business to government], so we wanted to use this opportunity to showcase how useful drones can be,” he says. “We have seen very positive feedback.”

For their coronavirus-specific models, Marut has helped the Tamil Nadu and Assam governments. “We have close to 30 requests from across India, and plan to start charging a fee.”

Of the 72 drones that Marut has, close to 52 have been deployed for Covid-19 interventions. The startup had a turnover of ₹49 lakh last year, and is looking to close this year with ₹3 crore.

“Last year, we only had four clients, one for each drone segment. This year we are looking to tie up with some more state governments, including Assam, West Bengal and Karnataka,” says Vislawath.

Although the cost for each customer varies, for Drone-As-a-Service (DaaS) the company charges about ₹15,000 per drone per day. And for its IoT and AI platforms, it has a SaaS model, for which they charge ₹500-1,000 per user per month.

Although the team of three IIT-Guwhati graduates—including Suraj Peddi and Saikumar Chinthala—started with an undisclosed seed funding that they received from Kiran Darisi and Parsuram Vijaysankar, co-founders of Freshworks, the interest in funding has increased after the pandemic. “We are in talks with a few angel investors, and we will be closing a round of funding of about $2 million in the coming two months,” says Vislawath. Read Part 1 of the series here