The NBFC—and soon-to-be bank—has minted its own processes, including a trademarked digital approach, to bring financial inclusion to millions 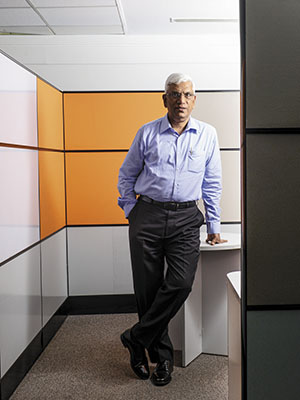 Image: Bmaximage
Janalakshmi CEO VS Radhakrishnan expects the NBFC-MFI to make the transition to a small finance bank well ahead of the March 2017 deadline

Janalakshmi Financial Services, set up in Bengaluru in 2008 by former Citibank senior executive Ramesh Ramanathan and his wife Swati, was started with a simple mandate: To run a scalable business that provides small loans to low-income borrowers in urban India. With over 5 million customers currently, borrowing on average between Rs 15,000 and Rs 50,000, it has stayed the course.

What has helped is Janalakshmi’s awareness that technology would play a vital role. To that end, the non-banking financial company (NBFC) embraced technology early in its life, deploying, among other things, a core banking software in its commencing year. This provides software modules to run most parts of a bank’s operations.

Things, though, are about to get more intense for Janalakshmi. “We have an in-principle banking licence,” CEO VS Radhakrishnan tells Forbes India. This licence, granted in September 2015, was specifically for a small finance bank; the Reserve Bank of India (RBI) is encouraging the setting up of such banks to bring financial services to the poor and underserved majority of Indians.

Radhakrishnan, 48, who joined Janalakshmi in 2007, expects the company to make the transition well ahead of the March 2017 deadline by when various regulatory requirements have to be in place.

The people behind it
Janalakshmi started life in 2000 as a division of Sanghamithra Rural Financial Services (SRFS), a part of Myrada (Mysore Resettlement and Development Agency), an NGO that worked to resettle Tibetans in India. In July 2006, it was incorporated as an independent company and in March 2008, it was registered with the RBI as an NBFC. It was formally classified as an NBFC-microfinance institution (MFI) in September 2013.

Using the nuts-and-bolts philosophy on which they built their policy advocacy organisation Janaagraha, the founders, now both 53, set up a two-tier structure with the non-profit Jana Urban Foundation, a Section 8 company, functioning as the parent company of the profit-seeking Janalakshmi Financial Services.

“I was acutely aware of the need to raise capital to fuel growth,” Ramesh Ramanathan explains on the company’s website. “I knew such capital would only come if investors were confident of the company’s profitability and continuing growth prospects, along with well-established controls and the highest standards of ethics and corporate governance.” A market-oriented company would also find it easier to attract and retain the best talent as well as move quickly to invest in strategic areas, including technology and new promising business avenues.

Also, with cities and towns projected to account for every other Indian over the next three decades, from the current one in four, the Ramanathans wanted to tap the urban play, Radhakrishnan says. The other intent was to ensure scale, again something which urban India lent itself more easily to. And also, “they wanted to do this pro bono,” he adds.

Janalakshmi can be seen as the flagship of the Jana Group, which includes Janaadhar, a low-cost housing business, and Jana Capital, which now holds the promoters’ shares, previously held by the Jana Urban Foundation. The Foundation now works on educating poor people on financial planning, and handles financial advisory for Janalakshmi free of charge. “In that sense, they have separated the heart of the intent —to help poor people—from the mind,” points out Radhakrishnan.

Puneet Bhatia, an MD and country head for India at TPG Capital, emphasises the relevance of Janalakshmi. “In India, there is a tremendous opportunity to fill the gap between what is being offered by traditional banks and what the nation’s growing population needs,” Bhatia had said in April, after the private equity firm led a $210 million (around Rs 1,400 crore) investment in Janalakshmi. That comprised $150 million in directly buying an undisclosed stake and another $60 million in buying the stake of some investors who were seeking an exit. “Janalakshmi is a pioneer of microfinance and is at the forefront of addressing this opportunity in a meaningful way. We look forward to our continued partnership with the company and helping more Indians access financial services,” Bhatia had said at the time. TPG had also invested in Janalakshmi in 2014.

Among Janalakshmi’s early investors were Lok Capital and Michael & Susan Dell Foundation, which exited in 2013 in a transaction worth Rs 250 crore, according to a press release by Unitus Capital, a reputed impact-investment bank, which has helped Janalakshmi raise funds from 2009.

“Janalakshmi has succeeded due to multiple reasons,” Eric Savage, co-founder and CEO of Unitus Capital tells Forbes India. “Ramesh [Ramanathan] is an incredible visionary, laser-focussed and relentless; embracing technology is a core part of their DNA and has allowed them to scale fast,” says Savage, adding, “[With the transformation into a small finance bank], Janalakshmi will have the ability to bring best-in-class services to the SME sector as they have already done in microfinance. This is one of the biggest market opportunities in the world.” 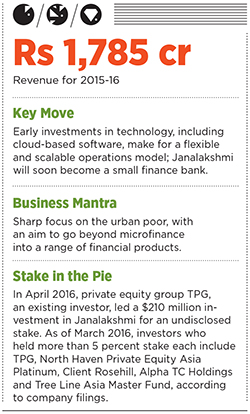 Why it is a gem
Janalakshmi has managed to keep its bad loans low because first-time borrowers form small groups of up to 25 members who act as guarantors for each other.

“Subsequently, we would like people to be individual borrowers,” Radhakrishnan says. Once a first-timer is within the system, there are opportunities to borrow larger sums in “nano loans” of as much as Rs 1 lakh and eventually become a micro-entrepreneur with loans of up to Rs 5 lakh.

In 2014, the company migrated from cash-based loans to pre-paid debit cards, and has issued about 5.3 million cards, partnering with card issuers. It disbursed Rs 10,980 crore loans in the year ended March 31, 2016, of which Rs 10,000 crore was through the cards. The cards are linked to a mobile wallet and Janalakshmi is adding a neighbourhood stores-based agency-banking system, explains Santanu Mukherjee, the company’s chief innovation and strategy officer.

There are over 340 Jana Centers in 18 states in India. It also has 850 agent locations where card holders can do most of their basic financial transactions—like sending money, for instance.

Low-income customers have, in particular, taken to the “physical touch with digital delivery” approach, which is called ‘physital’ at Janalakshmi—a term it has trademarked. “[Traditional] banks are not able to serve these people,” Radhakrishnan says. It makes more sense for them to go after the more affluent segments of urban India. “[But] we are a little bit like companies that focussed on shampoo sachets and made a business of it,” he adds.

Janalakshmi also put in a Salesforce.com-based system for its field staff, which means it gets cloud-based flexibility if and when it expands. It implemented a biometrics-based system that can tap into the Aadhaar unique ID system and also independently help customers identify themselves while doing financial transactions—Janalakshmi maintains its own database of customers’ biometrics, using all the 10 fingerprints of a borrower. Therefore, for example, a Janalakshmi card user can withdraw or send money at the agency-banking outlet by using a fingerprint, doing away with the need to remember a PIN, Mukherjee says.

All of this means, as the NBFC-MFI changes into a small bank, it is ready to exploit the entire India Stack—a combination of the payments backbone built by the National Payments Corporation of India and the many digital financial transaction capabilities that will ride on top of it.

Risks and challenges
Getting loans to such people in a viable manner “is a very people-intensive business and the physical contact with people is very important,” says Radhakrishnan. Janalakshmi employs about 10,000 field staff who get to know the borrowers and offers loans.

The problem isn’t demand: The challenge is running a sustainable business collecting Rs 1,000 every month from millions of borrowers even as it adds between 300,000 and 400,000 new borrowers every month. This is where technology plays a strong role in ensuring viability by keeping costs low.

Unitus Capital’s Savage says: “They have consistently been growing at over 100 percent per annum. This naturally creates many sticky wickets, including human resources, maintaining credit discipline and sustaining culture. It will take continued vigilance to ensure this remains the case.”

In the long run, Janalakshmi will continue to bring financial inclusion, but also look at ‘financial adjacencies’. For instance it could look at low-cost housing or public toilets but not large projects like metro rail, which will remain the domain of big banks. Says Radhakrishnan: “Over a period of time, microfinance, the way we do it today, will become less and lending to enterprises, affordable homes and public finance verticals will increase. Then it will be a more distributed business.”