While extracting Vitamin D3 from wool has been its mainstay, the firm is looking to move beyond its niche and expand into biotechnology 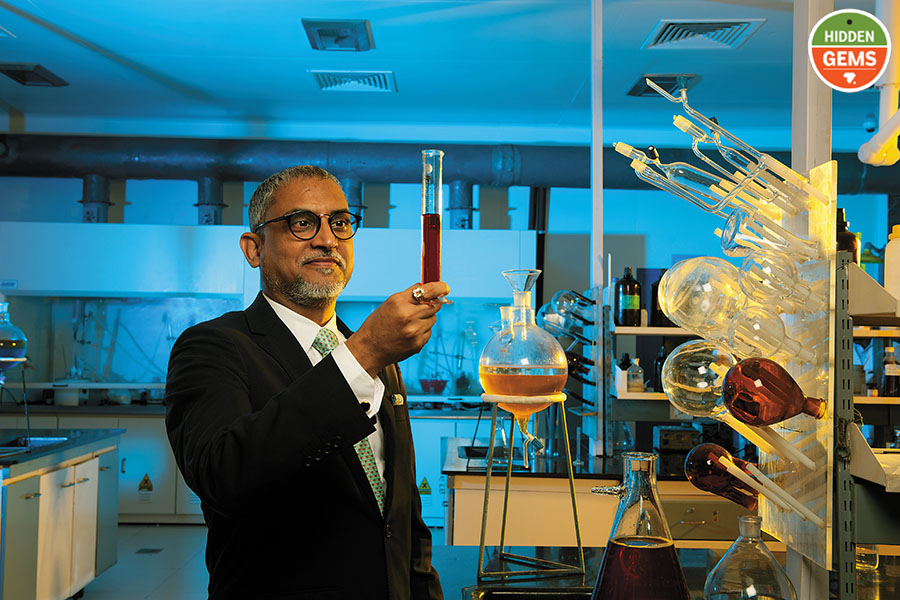 
The Vitamin D3 manufacturing market in India remains fairly unexplored due to limited raw material—cholesterol in sheep wool—and the complex procedure of extracting it. Many companies have entered and left the business, but there is one B2B Indian firm that has survived for 60 years. Fermenta Biotech, a subsidiary of Duphar Interfran (DIL), currently a ₹401 crore company, is the only home-grown maker of concentrated Vitamin D3 that is sold to pharmaceutical or food companies, which recalibrate it for their final product.

Extracting Vitamin D3 begins after a sheep is sheared. The animal’s woollen fleece is washed and the dirty water, which contains grease, is put in the centrifuge to segregate it from oil. The cholesterol in the oil is further processed with alcohol and light to draw out the chemical.

The technology to extract Vitamin D3 was brought to Fermenta (then known as International Franchise) by NV Phillips Duphar (Amsterdam) during its joint venture (JV) with Crookes Laboratory UK since the early 1960s. “In 1980, NV Phillips Duphar was taken over by Brussels-based Solvay Pharmaceutical, which then went on to become our JV partner. Fermenta was set up as a subsidiary in 1986 and started operations in Kullu, Himachal Pradesh,” says Prashant Nagre, CEO, Fermenta. The company obtains the raw material from Japanese and European companies.

Fermenta split with Solvay in 1999 and the promoters of DIL got the Vitamin D3 business. “It was only in 2004 that the company started manufacturing Vitamin D3. Today, this business alone accounts for 90 percent of the company’s total revenue,” says Nagre. The rest of the revenue comes from biotechnology products.

Although relying on one product for most of its revenue could be perceived as a risk factor, Fermenta caters to six different segments within the Vitamin D3 vertical. It not only supplies to the Indian market, but about 80 percent of its Vitamin D3 revenue comes from exports to about 50 countries in sectors such as pharmaceuticals, dietary nutritional supplements, food, animal nutrition, animal feed and rodenticides. “We are in a market where one molecule can be used in six completely different segments, each of which has a different distribution network, mindset and customer. This was both an opportunity and a challenge for us,” says Nagre who joined the company in 2009. “We have not left any aspect of D3 that has not been researched and improved upon as compared to the patents that were launched globally.” 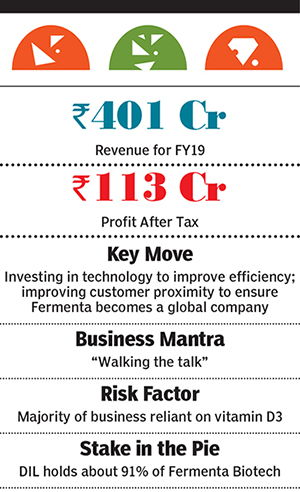 Betting on a niche product has paid off for Fermenta, as it is one of the top producers and suppliers of D3 in the world competing with Chinese and Dutch companies. “We anticipated demand after 2009-10 when the export market opened for us. We realised this is a growing market, and started putting all our resources into creating infrastructure to meet the demand.”

Fermenta ended FY19 with a turnover of about ₹400 crore with an Ebidta margin of 40 percent, up from ₹300 crore and an Ebitda of 34 percent in the previous fiscal. Profit after tax has also increased from 6 percent in FY17 to 28 percent in FY19. “Depending on our customer and the kind of products they want, price is decided. In India, for instance, we sell at about ₹1.5 lakh to ₹2 lakh per kg,” says Nagre. Fermenta had received private equity funding of ₹40 crore from Evolvence India Life Sciences Fund in 2011, which exited in December 2017. The biotech firm is now merging with DIL, its holding company, not only to save costs, but also to improve efficiency, especially in cash management.

While the focus so far has been on D3, Nagre feels that enzymes, the biotechnology segment that contributes less than 7 to 8 percent to revenues, has tremendous potential to grow. The business was set up by Fermenta during its inception and China was the largest market for the sector till 2013-14, when the latter set up a number of companies. Ever since, India lost out on business. “However, in the last two years we have reinvented ourselves, and from a turnover of less than ₹1 crore we were up to ₹12 crore last year,” says Nagre.

In order to expand its product portfolio, the company will foray into nutritional ingredients. “We have already begun our research for antioxidants, Omega 3 fatty acids, vitamins and minerals. And to expand in this market we are establishing subsidiaries and looking for some acquisitions in Europe and the US, since the market for nutritional supplements is massive,” says Nagre. The company is banking on its well-developed global supply and distribution channels to rapidly expand its footprint in the segment.

Says Sunil Shetty, leader, India pharmaceutical and life science, PwC India: “The Indian pharmaceutical industry has become fiercely competitive in the last few years. There have been a number of changes, including changing market characteristics, distributor consolidation and transformation into a more complex generic specialty pharma.”

Shetty adds that the Indian government is repeatedly raising the prices of inputs and putting the industry under stress. This might have an impact on Fermenta’s biocatalyst business, which is focussed mainly on the Indian market.

Currently Fermenta has two manufacturing units, one in Kullu and the other in Dahej, Gujarat. As part of its expansion plans, they have bought one more property in Saykha near Bharuch, Gujarat.

“The greatest challenge for us is expanding our portfolio beyond the one segment that we have been in for years now. If we ever dream of becoming a leading nutritional ingredient label, we need very rapid infusion of products.”

Tweets by @forbesindia
How Spoton Logistics made a U-Turn
Can a giant company behave like a startup?