How tea retail chain Chaayos managed to keep its brew intact by surviving chaotic months. All it banked on was safe-tea 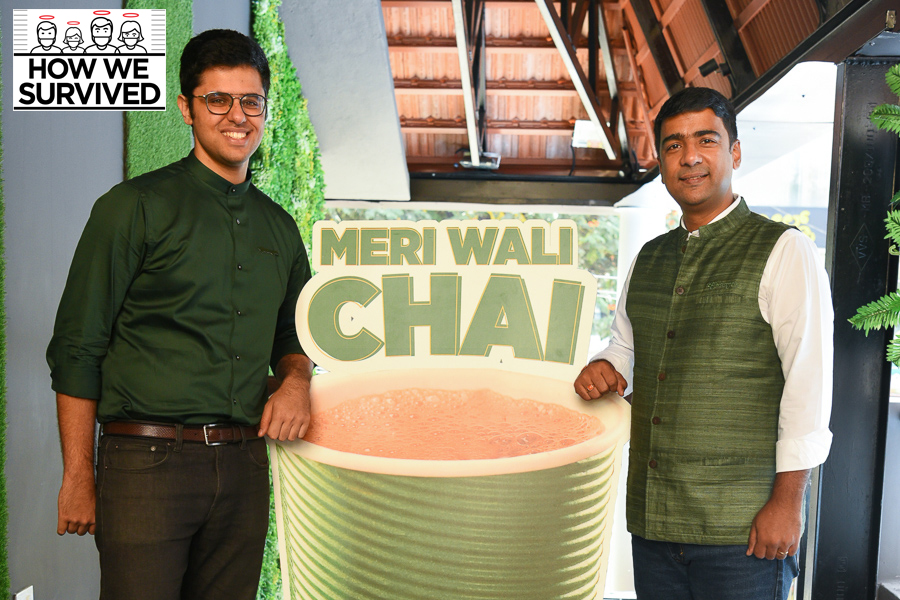 'How We Survived' is a series of stories on businesses—big and small—that innovated or pivoted during the coronavirus crisis to survive. For all the stories in this series, click here Last February—after eight long years—Nitin Saluja managed to put all the ingredients in place. The IIT-Bombay grad was finally ready to brew a perfect masala cuppa at his tea retail chain brand Chaayos, which he co-founded with fellow IITian from Delhi, Raghav Verma, in 2012. Saluja was understandably excited. “One ingredient somehow always went missing in the past,” Saluja recalls, alluding to what held back Chaayos from growing aggressively. He explains. At times, a ‘solid’ team was lacking; then there were years when the fledgling brand didn’t have sufficient outlet heft to press on the gas pedal; and intermittently, capital was elusive for Chaayos. For eight years, there was one or the other slip between the cup and the lip.

For once, Saluja thought he had cracked the missing puzzle. Chaayos reportedly raised $18.5 million from a bunch of venture capitalists (VC), including Silicon Valley-based investment firm Think Investments last February. Existing investors such as Elevation Capital, Tiger Global Management, former WhatsApp chief business officer Neeraj Arora and Hong Kong-based Integrated Capital also chipped in. The same month, Saluja went on to raise $3 million in debt from InnoVen Capital. The brand now was well capitalised; a close-knit team was firmly in place; and Chaayos was prepared for a tea juggernaut. The brand was set to cross the Rs 100-crore revenue mark in FY20; with 84 outlets in the bag, Chaayos was planning to fan out at a much faster clip; and losses too had not ballooned much (see box). “We were ready to roar,” he recalls.  A month later, in March, Covid gate-crashed into the prospective party. In April, Chaayos clocked in a mere 10 percent of pre-Covid revenue. With the pandemic raging in full intensity, there was no silver lining; the forecast for the next few months too looked gloomy; and it didn’t look like a storm in the teacup. Being in the tea retail business—especially for Chaayos which was predominantly based on brick-and-mortar outlets—didn’t seem like the right cup of tea.   Cut to December 2020. Business bounced back to 65 percent of pre-Covid level; eighty percent of the stores opened up and started clocking around 80 percent of the previous sales numbers; takeaway business has jumped from 1.5 percent in February to 5 percent; and delivery’s contribution to revenue has climbed to 35 percent. Tea has started brewing; Chaayos is back in action; and Saluja is sporting a ‘T’ sign for victory. 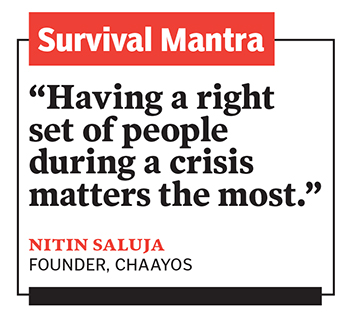 The alphabet ‘T’, it turns out, was the magical ingredient that helped Saluja tide over the Covid storm. “Both the words start with T: Tea and tenacity,” he explains. While tea is what Saluja and his team have been dealing with, the inspiration for tenacity comes from American ultra-marathon runner Dean Karnazes. ‘Run when you can, walk if you have to, crawl if you must. Just never give up’ is what he once remarked. Saluja didn’t give up.

The first survival hack, the tea entrepreneur underlines, was adding a layer of safety to everything; from operations to employees to offerings. “We called it safe-tea,” he smiles, taking a swig of warn cup of masala tea on a chilly January evening in Gurugram. North India, including Delhi-NCR, is in the grip of a severe cold wave. Saluja, though, has no reasons to complaint. Rebound in business has ensured that the winter is less of discontent. “Sit at home and enjoy a cup of safe and warm tea,” he smiles.  Back in April last year, safety was the primary concern. To allay the apprehension of consumers, Chaayos started to print body temperature of the staff on the bill. A ‘safe-tea’ promise was put in place for users. From thermal screening of the staff and consumers coming to the store to a stringent enforcement of sanitisation procedures across all outlets to a higher customer communication, Chaayos went hyper aggressive in driving home the message of safety. Automated hygiene-related information was shared with its users. “Customers took note of it, and liked it,” recalls Saluja, adding that a 20-point agenda was drafted to handle the crisis.    The comeback strategy was shaped by four factors. First was having a right set of people who believed in the vision of the company. “What matters most during a crisis is your team,” contends Saluja. Second was the speed of decision-making and execution. Very early in the crisis, Saluja recalls, the brand decided to act quickly to stock raw materials for at least three months. “It helped in navigating the uncertainty,” he says.  The third factor was the role post investment in creating a brand. Chaayos, claims Saluja, has managed to build a credible brand image over the last eight years. It came in handy during a crisis where the only things people were looking for were quality assurance and credibility. Being able to offer customised tea and maintaining consistency in taste played their part in building a brand. Also being in a business which is largely driven by impulse helped to stay insulated as compared to other F&B players who are still reeling under the losses faced due to the crisis. The last, and most crucial issue for Chaayos, was having enough capital in the bank. For an entrepreneur, who has survived multiple ‘capital punishment’ in the past, having the cushion of sufficient capital in the bank can indeed be comforting.

Chaayos, reckon industry experts, has managed to not only survive the pandemic but also a brutal tea industry. India is a nation of tea drinkers. Almost 50 times more tea is consumed in the country compared to coffee. With such a large consumption base, there is widespread offtake at homes (virtually every household makes tea) as well as out of home. “The recipe to make tea varies every few kilometres,” says KS Narayanan, food and beverage expert. There are more challenges to contend with:Lower unit value per consumer as compared to coffee; and need for more transactions per day to stay in the business.  Chaayos has managed to grow consistently. “Its top line has outpaced the bottom line. This is the most encouraging part,” says Ashita Aggarwal, marketing professor, SP Jain Institute of Management and Research. For a consumer brand, especially selling a product like tea, the business could easily turn out to be cash guzzling. The fact that it has managed to survive and grow has helped it build a credible brand in a segment where many tried, made a promising start and then perished. “It’s a credible consumer brand story,” she adds.   Five years back, in 2015 and 2016, Chaayos was a different story, though. A story where the protagonists were struggling to survive. The crux of the problem was capital. In early 2015, Chaayos was a 50-member team, had seven outlets and a revenue of Rs3.5 crore. “We didn’t have enough capital. We needed more,” Saluja recalls. The next year, though the capital problem was solved, another issue popped up. The root cause this time again was capital. Excess capital. “We started to focus on growth at the cost of everything,” he recounts. “That was my first mistake,” Saluja adds. 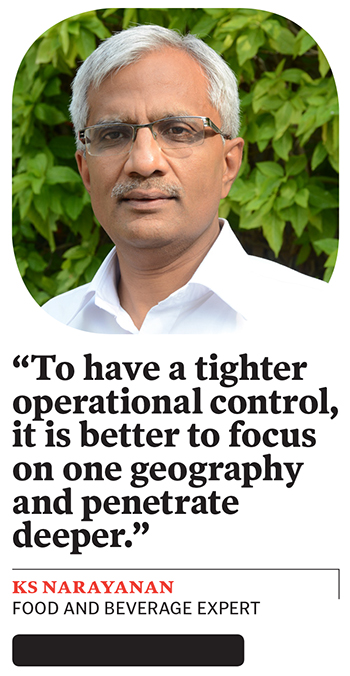 In 2016, the outlet count doubled to 19; revenue leapfrogged to Rs 10.6 crore; but something was missing—customer experience. “We were growing with our eyes closed,” he says. More stores were opened without reviewing the overall team capability, and customer experience took a backseat. In 2016, Net Promoter Score (NPS)—a metric used to measure customer loyalty and measurement—fell to a low of 17. There was another problem: Chaayos was again running out of capital. Saluja paused. For six months, Chaayios didn’t open any store. The idea was to improve NPS. “The next store was opened only when the NPS touched 40,” he recalls, sharing the biggest takeaway of 2016: Compromise on customer experience, and you lose it all. “It doesn’t matter how much capital have you raised. If you don’t have customers, you don’t have business,” says Saluja.  There was another huge learning. With every transaction, Saluja underlines, a brand gets three opportunities to screw it up. First is how to interact with the customer; second is store hygiene; and the last is the product. “We focussed on all three, and this helped a lot leading into the pandemic,” he points out. The business of tea, Saluja underlines, teaches patience, a critical attribute for any entrepreneur and any business. Covid has reinforced the priceless virtue of brewing tea, slowly and safely.

Tweets by @forbesindia
News By Numbers: One death by suicide every 4 minutes in India
5 Indian companies addressing health care needs during Covid-19