Economic Milestone: Beginning of the Downturn (2010) 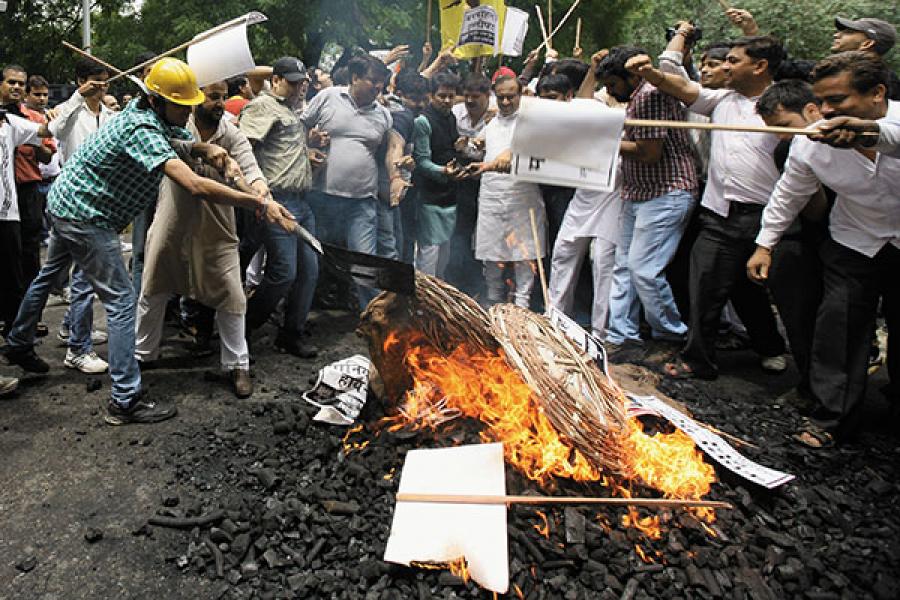 Image: Getty Images
Bharatiya Janata Yuva Morcha activists burn an effigy of Manmohan Singh in New Delhi on August 29, 2012, during a protest against the coal scam

The first decade of the 21st century saw tremendous growth and optimism in India. While the markets unleashed animal spirits, the country became an idiom for development, thanks to massive poverty reductions reflected in increased per capita income (from $300 in 1991 to $1,700 in 2011), second only to China. India also held its own during the 2008 global financial crisis that had brought most of the financial powerhouses to their knees.

However, the good work was undone in 2010 as growth tanked, inflation rose, and the current account deficit increased (to $31 billion in 2013). Just by looking at the numbers in this period, it would seem that the high growth rate in the preceding years was an aberration.

So what went wrong? As many economists observed, the main players which led to India’s upturn were also the very reasons for its downfall: Its economic and political institutions.

On the economic front, outdated land rights and even more archaic laws, the rise in cost of living, and India’s strongest industries (steel, manufacturing and auto) going through tough times meant that the pillars of the economy remained wobbly due to domestic policies that led to inflation and limited growth.

As if the economic churn wasn’t enough, India also saw some of the most politically unsettling times of the decade. It was during this period (2008-10) that a series of mega scams—2G, Adarsh, Commonwealth Games, to name a few—tumbled out of the UPA’s closet and exposed the widespread corruption.

The “policy paralysis” that set in gave birth to cronyism, especially in the management of natural resources, such as coal. By 2013, infrastructure projects worth an estimated Rs 7 lakh crore or more were held up for various reasons.

The sales figures of passenger cars can often be a pointer to the health of the economy. According to the Society of Indian Automobile Manufacturers (SIAM), car sales grew at 15.2 percent in 2005-2006; in 2012-13, it fell by 6.69 percent for the first time in a decade.

“While the slowdown was partly rooted in external causes, domestic causes were important as well,” says Prachi Mishra, senior economist at the International Monetary Fund. “The post-financial crisis stimulus led to strong consumption which, coupled with supply constraints, led to higher inflation. Monetary policy was tightened despite external headwinds to growth. The consequent slowdown was across the board.”

Things have started to look better, but only slightly. The new government has its work cut out.

Tweets by @forbesindia
Mid-air luxury making a comeback?
Not Quite National