PD Mundhra recounts how he started eClerx, a knowledge process outsourcing company, when the industry was still nascent 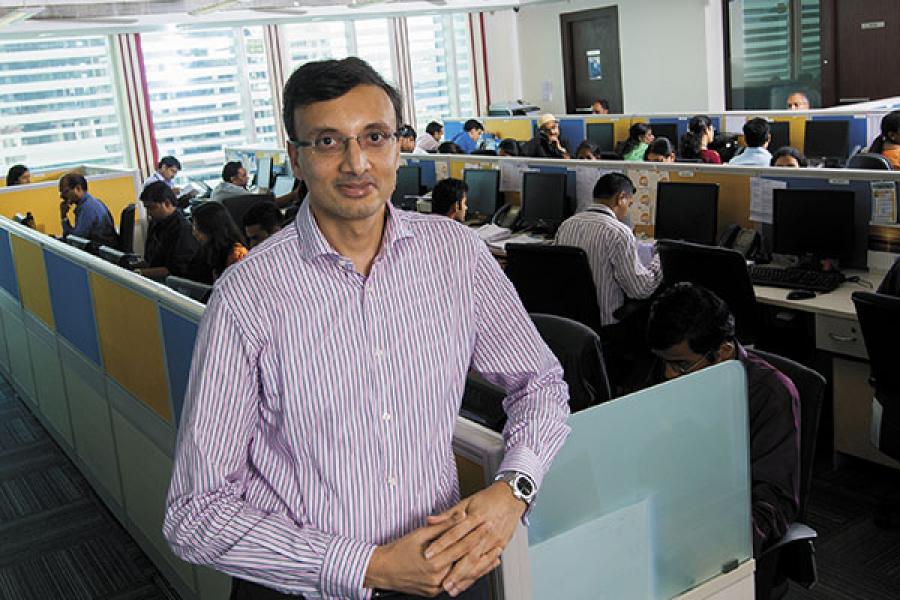 PD Mundhra
Age: 42
Designation: Co-founder and executive director
The Challenge: Building an outsourcing company at a time when it wasn’t a preferred industry
What He Has Achieved: Has multiple large global companies as clients; has revenues of Rs 818 crore (as on March 31, 2015)
How He Did It: By recruiting the right people and building strong relationships with the right clients


I grew up in Kolkata where I studied for my Bachelors in Commerce at St Xavier’s College. Classes were between 6 am and 10 am, after which I would work in the family business. In 1994, immediately after getting my degree, I was accepted by the Wharton School, University of Pennsylvania, where I was among the youngest in my batch. Wharton changed my life in more ways than one. There, I met my current business partner Anjan Malik.

Unlike many of my batchmates, I returned to India after my MBA in 1996. My original intent was to start a business in financial services. I worked for a little less than a year with Citibank in Mumbai and, at the end of that stint, I realised the plan I had in mind was not feasible in India at that point in time. Remember, the India of the 1990s was very different from the India of today. My idea was to provide asset management services to pension funds (known as employee provident funds in India) of companies that had their own trusts. The plan had to be abandoned as not many companies were accustomed to the idea at the time.

After Citibank, I was looking for things to do and I came across Hindustan Lever Limited (now Hindustan Unilever Limited). The company, both then and now, didn’t have its own manufacturing facilities and so they used a network of ancillary providers, and I decided to be one of them. I set up a unit that packaged detergents for the company; but a year-and-a-half later, I sold off that business as well.

By then, Anjan had been working for six years in the sales and trading wing of Lehman Brothers and we were talking about doing something together. The idea was to undertake outsourced Powerpoint work for Lehman. These were essentially the pitch books for bankers that a 100 or so people prepared from London and New York. Since Anjan was at Lehman, he had access to some of the key decision makers and so we did some research and put together a pitch, which went up the ladder at Lehman a fair bit. But in the end, they decided against it. That experience gave us a lot of understanding of the economics of offshoring and what the technology needed to be.

With our new learnings, we decided to set up a business and try and see what we could do. Thus, our knowledge outsourcing company eClerx was born in January 2000. Through the Wharton School network, we had been approached by some classmates who had set up their own companies and were looking for cost-effective support offshore. This support was primarily around managing their websites and catalogues, which had to be updated regularly and hence there was a fair amount of work.

This initial round of offshoring work that we did taught us two things. First, project-oriented work is a difficult way to make a living because after completing a project, you have to start looking for a new client. Second, working with startups is inherently unstable, so we had to look for large companies to work with.

A year later, we got our first brand name customer: Dell. They were looking to outsource support for a small part of their business—software and peripherals. We completed the RFP [request for proposal] and won the right to do a pilot. They were happy with our work and we got our first (small) contract from them. It was a milestone in the history of our company.

Anjan joined eClerx full-time in late 2001. Due to his background in financial services, we tried to develop an offering to get customers from the banking space. In 2002, we signed on Lehman Brothers, our first customer in the banking space. Lehman wanted to outsource trade support. If you look at sales and trading, once the trader does a trade with the counterparty, there is a host of paperwork that follows. The trade has to get confirmed, the brokerage amounts must be reconciled and the trade has to get settled and cash exchanged. All the operational work, post the trade, was done by us. It is primarily out of these two original relationships that our digital and banking businesses have grown.

But the growth has not been without challenges. The initial challenge was to find the right people to come and join the company. Today, the whole concept of outsourcing is well known. But in 2000, people had never heard of us and we weren’t looked upon as a preferred industry. Anjan and I were very involved in the recruitment process initially, as we knew that people were very important in this business. What helped us were our clients. If you could give someone the comfort of working with a big-ticket company, then that went a long way. Over the years, our focus has been to build broad and deep relationships with a few clients—rather than managing 200 relationships we are better off managing five to 10, and converting those relations into meaningful businesses. What also helped was that these companies were large enough to give that spend to a single partner.

The next big challenge was scaling the business—running a $2-million company is very different from running a $20-million company or a $200-million company. At the initial $2-million [in revenue] stage, it was all about execution. So it entailed attracting the right talent and meeting the agreed quality parameters for the work. This required relentless micro-management by Anjan and me.

The next phase focussed on building a layer of leadership and learning to delegate. We also went public, mainly to raise our profile and give liquidity to employees who had received stock options. Once we went public [the company listed on December 31, 2007 just before the markets peaked] the challenges were around compliance and procedures that a listed company has to follow. This was important as it was only through this that we would attract the right people on our board.

Our growth has been rapid. Between 2007 and 2012, we grew at an annual rate of 25 percent in dollar terms. Since then, growth has slowed and on a higher base it has been around 15 percent a year. The slowdown has happened as a result of the business environment and the sectors we have been exposed to, banking in particular.

What would have delighted a customer four to five years ago is now table stakes. Earlier, if you were able to take a business process and show them the arbitrage of moving it offshore and meet their SLAs [service level agreements], clients would be happy. Now, they also want you to deliver insights that are actionable and create business value for them.

As a company with a $700-million market capitalisation, we have to be mindful of the risk of vendor consolidation favouring the larger providers. Large clients want to work with a few strategic partners. For a small provider like us, it is important that we develop some specialisation, or some unique value proposition, that motivates the customer to work with us.

The only real issues we have faced over the years are fuzzy and unclear government rules. In our business, the regulatory interaction is not so large but things like foreign exchange rules and transfer pricing are sometimes a problem. Tax refunds often don’t come on their own and we have to litigate.

Hopefully, with the new government in place, that will also start to change soon.

Tweets by @forbesindia
Ela R Bhatt: All types of economies should co-exist
MM Forgings reaping the rewards of controlled expansion