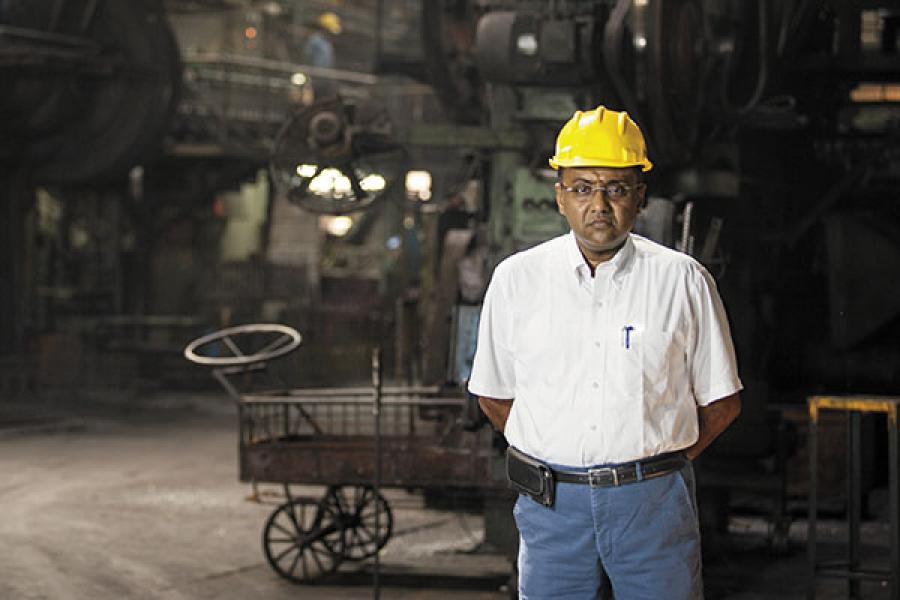 Vidyashankar Krishnan
Age: 50
Designation: Vice chairman and managing director
The challenge: To grow MM Forgings into a global company and expand its core area, which caters to the automobile sector
What he has achieved: In five years, grew MM Forgings from a Rs 165-crore to a Rs 502-crore business
How he did it: By setting up plants in Tamil Nadu at relatively lower costs and forging products that are on par with those made by global rivals


I started working with MM Forgings as a trainee just after I completed my engineering at IIT-Madras in 1990. Those were the early days of information technology, and a lot of my friends were going abroad to study. That option was open to me too, but I let it go. I knew that if I moved out of the country, I would never return. I felt that the success of one generation should be built upon by the next generation, and so I chose to become a trainee.

MM Forgings was started by my grandfather in 1946 as The Madras Motors Limited, a dealer of Royal Enfield Motor Cycles, UK. In 1972, my father took over the management of the company, after setting up the agricultural engines division of the erstwhile Enfield India Limited. He was a Chartered Accountant by profession and an engineer at heart. Not content with merely selling motorcycles, the allure of manufacturing came over him. We started out with a forge shop in Singampunari, Tamil Nadu, which had a manufacturing capacity of 780 metric tonnes per annum (MTPA). By the mid ’80s, we had expanded the business and increased capacity by around four times to reach 3,000 MTPA. We were also able to get into the export part of the business. That was a big deal for us.

In 1989, as part of our total sales, we managed to earn Rs 5 lakh through exports to the US. It was a small number, but we felt it was a big achievement. Those were the days when India was not seen as a manufacturing destination or, for that matter, a country that could be capable of exports.

I was one of the youngest members in the team. It was a typical manufacturing set-up where most of the people who worked with me were much older. It was not easy being a greenhorn among such experienced people. But I learnt a lot, and worked in many departments.

In 1993, Madras Motors Limited became MM Forgings. My father wanted to go in for an expansion, but getting funds was not easy. He decided to list the company to raise money. By then, we had made a name for ourselves, which is why we were in a position to charge a premium of Rs 25 on our initial public offering [IPO] in 1994. The issue was oversubscribed 17 times.

When I was 28, I was put in charge of the expansion of our Viralimalai plant in Tamil Nadu. The goal was to take its total manufacturing capacity from 6,000 to 15,000 metric tonnes (MTPA) with funding from our IPO. The expansion was a success.

We started to consolidate our business and look for different markets. By around 1994, MM Forgings had a manufacturing capacity of 15,000 MTPA, which today stands at 45,000 MTPA. Our plants have generally maintained a capacity utilisation of about 80 percent.

But in 1999, my father passed away; he had a heart attack. That was a huge blow for us. What I hadn’t realised then was how well my father had trained me. It was only in a couple of years that it dawned on me that I had a thorough understanding of how the organisation worked. We decided to fulfil my father’s vision for the company. And I became the managing director of MM Forgings at the age of 34.

I was considered rather young to head a manufacturing company. I concentrated on expanding our capacity. We were one of the first companies to put up a manufacturing plant on the outskirts of Chennai, at Oragadam, in 2002 when there was hardly any presence of an industry in that area. We purchased land at around Rs 3.73 lakh per hectare. Since then, the area has become a hub similar to Gurgaon and Pune, and land prices have appreciated 60 times.

With my younger brother, K Venkatramanan [now joint managing director], I began to concentrate on consolidating our business in the international market. He has always looked after marketing and taken great pains in building this business. I have seen him making cold calls to companies; at times he had to visit clients multiple times before they even gave him a first appointment. It was tough, but we wanted to grow in the global markets, and we succeeded. Today, almost 76 percent of our sales are accounted for by exports.

But let me tell you that the export arm of our business really suffered during the financial crisis in 2008. It was the time when Lehman Brothers had collapsed and that hit the markets in the US, Europe and South America. This led to a fall in export revenue for MM Forgings. By 2010, our sales were down to Rs 165 crore, a fall of 23 percent from the previous year.

While the export market was drying up, the domestic market recovered faster. However, we were not able to participate in the domestic recovery as we were concentrating on our global business. Over the years, the industry rallied, and we were back on the growth path.

There were other challenges, too. Even as we were riding out the financial crisis abroad, we had to deal with a series of issues on the home front. A union problem was affecting the work morale of the company. We found out that the union was making the working atmosphere very difficult by ostracising hard-working people at the Viralimalai plant. To solve this problem with minimum fuss, we set up a voluntary retirement scheme (VRS) for our workers, and most of the troublemakers left the company.

Dealing with people is an important part of running a business. That means, your hiring has to be right. One of the big successes of MM Forgings lies in its hiring policies. We have a workforce of around 2,500 people, and the new generation is young and ambitious. Most of the new hires are not from other forging companies. We believe in training recruits as per our requirement.

Over the years, I have come to realise that I have a penchant for getting to the root of a problem. It may make me slow in the decision-making process, but I prefer to work that way. Our hiring process is similar. We like to look for people with a problem-solving attitude. We are conservative in our approach and this can be seen in the way we look at our finances.

While MM Forgings has steadily increased its capacity, it has used a good combination of debt and equity to finance its expansion. The debt-to-equity ratio has traditionally been maintained at low levels and at present it is at 0.25:1.

The management believes in sustainable growth, but not growth at the cost of high debt. The auto markets account for 75 percent of the sales for MM Forgings. This sector is expanding on the back of demand from emerging markets, and we have to keep pace. We are happy as long as the company grows and is in tune with the market.

While the traditional approach is to go in for acquisitions, we believe in buying second-hand equipment in the CIS [Commonwealth of Independent States] or European markets. We understand that this is less glamorous than going in for an acquisition, but history has proved that most acquisitions do not work. It is like implementing an enterprise resource planning solution where you never know what you will get.

We do not want to do anything different. MM Forgings has become an important name in the industry with a sales turnover of Rs 502 crore and net profit of Rs 50 crore in FY2015. It has a market capitalisation of Rs 800 crore. We are happy with this, and plan to grow further. But then, forgings is a capital-intensive business. We have plans of increasing our capacity to 65,000 MTPA by the next two years. We are in no hurry.

MM Forgings’ success is not due to me. It is on account of God’s grace and the effort of the team. I am merely a cog in the wheel.

Tweets by @forbes_india
How outsourcing company eClerx found its foothold
Beauty and the Beast: Coming soon to India